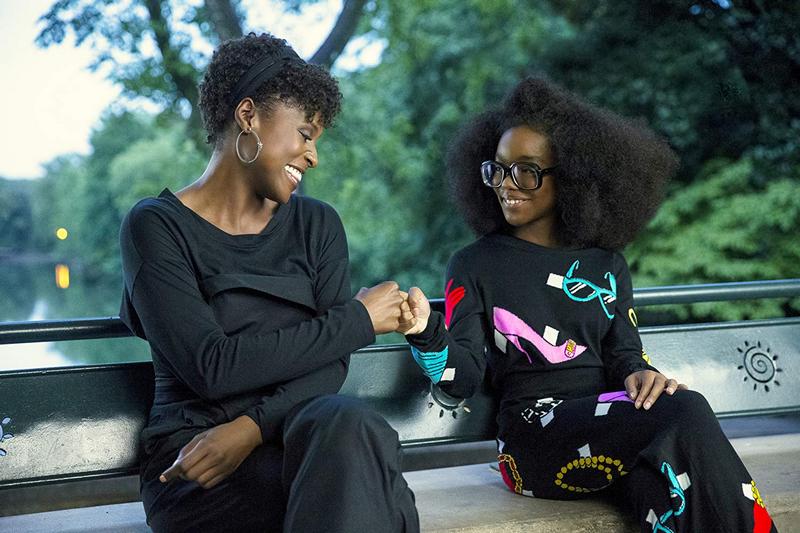 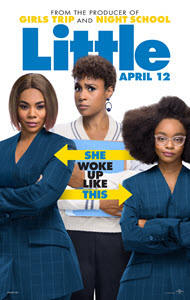 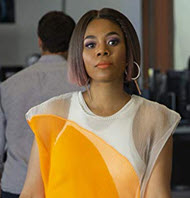 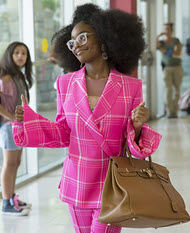 What would you do differently if you had a second chance to grow up?

the price of success

There’s little to love in this strange comedy, which is promoted as ‘irreverent’ and contains huge amounts of misbehavior and abuse.

Audiences are immediately confronted with the tantrums of adult Jordan (Regina Hall), a nasty businesswoman whose world is starting to crumble. She shouts and manipulates her way through life, while others bear the brunt of her unhappiness.

Like many before her, a small child wishes this woman would become “little” again so that she can feel what it’s like for a victim and be taught a lesson. Amazingly the wish is granted… Adult Jordan wakes up the next day in the body of 13-year-old Jordan (Marsai Martin), but in present time. Here begins the weird ride as Jordan and her assistant April (Issa Rae) each come to grips with how to grow up and become a confident leader—without being a bully.

There are a few healthy aspects to this film, which could be built on in discussion with young people:

“Little” also spends much energy on identity: “Everyone says you have to grow up to know who you are, but they’re wrong: kids know exactly who they are. Then life beats it out of you.” This reflects the tendency of most people to become less than their potential because of the effects of sin in the world and in each of us.

The good news is that our Creator knows who He designed us to be, so He can easily re-create us to each be the whole and balanced person we’d love to be. God’s Son—Jesus—has won for us a new life that is far beyond our own ability to achieve or create, and it even includes full forgiveness for the awful things we have done to people and to Him.

This same Jesus taught His followers that it’s healthy to be “little” in attitude: humble, kind and forgiving. As we see:

All main characters are primarily concerned with getting themselves ahead. This is shown in greedy consumer choices, objectification of others’ bodies and mistreatment of those who show vulnerability. The film’s makers have also sadly chosen to score laughs by use of insults and many other types of abuse (details are listed later). This is especially troubling because dozens of child actors are used.

In addition to the above, other strong and serious concerns include:

Beware—“Little” is also full of triggers for viewers’ own painful memories from school. Many scenes are difficult to watch, even for those who haven’t been bullied. A discerning Christian would not be able to ENJOY this type of ‘entertainment’ because it revels in sin and hurt of many kinds.

Despite its potential to have been a great film, “Little” disappoints by going way too far with its ‘fantasy comedy’ and bizarre behavior. Many teen girls will go along to the cinema with expectation of a light comedy and will instead find an uncomfortably inappropriate experience which will stir up negativity for them. If anyone reading this is a teenager, I’d like to encourage you that adult life doesn’t have to get so ugly—unlike the many adults around us who forever carry unresolved hurts from their school days, living as Christians we are able to enjoy the honesty, freedom and joy of healing as we grow up out of difficult childhoods.

In the end, the decision to combine a serious anti-bullying message and exaggerated humor has hit a predictably sour note. The trailer is exciting, and some acting is marvelous, but, overall, the film drags, and the casting, editing and story-line all lack consistency. There are only just enough great moments to keep a movie-goer in their seat, but you will still leave offended and disappointed for one reason or another.

At the showing I attended with a friend, many viewers sat silently during moments that were intended to be humorous. Using a teen in such a sensual starring role is not a wise choice, and I fear for the young actor’s well-being as she will doubtless have attracted some of the wrong kind of attention through this role (Please pray), as well as influencing girls to seek affection in a dangerous manner.

I trust that you will find a better movie option for your young loved ones.

“Have nothing to do with the fruitless deeds of darkness, but rather expose them. It is shameful even to mention what the disobedient do in secret.” —Ephesians 5:11-12

Negative
Negative—My last review of “Jumanji-Welcome To The Jungle,” was met with some pushback and criticism for saying that there were some subtle and overt references to the LGBTQ agenda, but this movie is no different.

From an entertainment perspective, this movie is slow and almost intolerable. My wife wanted to leave, but we were with our kids. The acting is either overly done, contrived or just bad. There are a few mildly funny parts, but overall, not very entertaining.

The plot (a child inhabiting an adult’s body—see “Big,” “Like Father Like Son,” “Freaky Friday,” “Shazam!”) has been used many times, maybe too many. So if you’re going to use it, it should be used wisely and with lots of humor. Unfortunately, that’s just where this movie bombs and where my main issue is with the movie. Although Jordan is a 13 year old child, the adult in her continues to act like she’s a sexually promiscuous woman! Young Jordan Sanders is portrayed in very sexual ways in the various scenes:
My 14 year old daughter made the comment to me that those scenes made her very uncomfortable.

If anyone doesn’t think these things are done on purpose, think again! After the Ball: How America Will Conquer its Fear and Hatred of Gays in the 90s was a book written explaining how America would be “desensitized” by putting LGBTQ characters in every movie. Sometimes it’s a subtle cameo and sometimes it’s an overtly LGBTQ character. Go back and look at movies from the 90’s and forward and see what you find. Some recent examples are “Frozen” (the cameo of the innkeeper’s husband and family), and “Jumanji: Welcome to the Jungle” (the female character inhabiting the body of Jack Black’s character—Transgenderism).

This movie, I believe is a subtle affirmation of what many in society and especially in the LGBTQ community are affirming as the next up and coming “right” in the sexual revolution; that Pedophilia (now called Minor Attracted Adults) is just another “sexual orientation” and that children are sexual beings and have the right to express themselves! This affirmation has already been made publicly (see B4U-ACT) [an organization apparently intent on normalizing pedophilia]. As I said, the reference in this movie is subtle, but there’s no doubt that “children are sexual beings” is exactly the message that is meant to be portrayed!