for sequences of adventure violence. 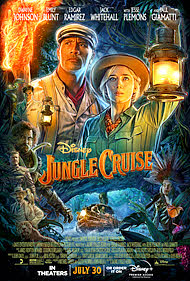 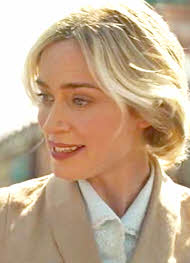 What is the real Tree of Life?

Snakes in the Bible 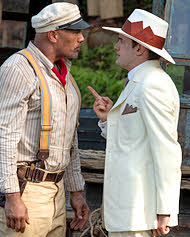 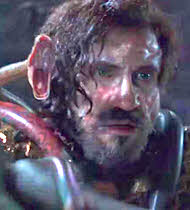 More than 65 years after debuting as a popular Disneyland theme park ride, Jungle Cruise is cruising into theaters and streaming on-line with a live-action adaptation.

So is the long wait worth it? Perhaps.

The movie calls to mind the spirit of movies such as the Indiana Jones films, “Romancing the Stone” and “The African Queen.” However, it’s not an instant classic like those films, but the Disney flick is family-friendly for the most part and lightly entertaining with plenty of humor in the form of dad jokes.

“Jungle Cruise” has a strong moral theme, espousing self-sacrifice, seeking the good for many and touting being trustworthy. However, Christians need to be concerned about violence in this film, as this is the main reason for its PG-13 rating. Discerning parents will also want to be aware of the movie’s supernatural element, which is a major plot point.

Set in 1916 when the world is at war, “Jungle Cruise” begins with Lily traveling from London, England to the Amazon jungle where she enlists Frank’s questionable services to guide her downriver on La Quila (which supposedly translates to goddess of the moon)—his ramshackle-but-charming boat.

Lily, who is portrayed by Blunt as a female Indiana Jones, bucks the male-dominated system at the time by wearing trousers for the journey, which prompts Frank to call her “Pants.”

Lily is determined to find the ancient Tree of Life and the “Tears of the Moon,” a legendary flower known for its miraculous healing abilities—possessing the power to change the future of medicine.

The real miracles of the Bible

Thrust on this epic quest together with Lily’s brother, MacGregor (Jack Whitehall), the unlikely trio encounters innumerable dangers from wild animals and supernatural forces, all lurking in the deceptive beauty of the lush rainforest.

Speaking of supernatural forces, the film features a curse spoken by a dying tribal chief and undead 400-year-old conquistadors who command creepy snakes that could scare small children. Snakes emerge from inside a man’s wound.

Another concerning aspect of “Jungle Cruise” is the amount of alcohol consumption in several scenes, including one where a jaguar gets drunk and vomits after drinking some spilled wine.

Rated PG-13 for sequences of adventure violence, “Jungle Cruise” has multiple intense sequences, including a German U-boat firing torpedoes at people, threat of cannibals, lunging and biting snakes, killer bees, blow darts, machine guns, pistols and rifles, spears, knives, a character being stabbed with a sword through his body and a bad guys being killed instantly by a huge slab of plaster.

Perhaps the most concerning and controversial part of “Jungle Cruise” is the script calls for McGregor to be Gay. He comes out to Frank. Although McGregor doesn’t use the word “Gay,” he says he broke off three engagements with women because his “interests happily lay elsewhere.” And carrying a spear, he asks a man, “Would you like to bite down on my stick?” (an innuendo)

McGregor goes on to say that he would do anything for his sister Lily because she was the only one who “stood by” him while he was shunned by family and friends because of who he “loved.”

During my screening of film, the scene didn’t seem to garner much attention from the audience, and it appeared to go over the heads of my sons, who are 9 and 11.

On the plus side, there are several elements from the park attraction featured in the movie. The most notable is the “back side of water” gag that most of the cast members use during the theme park attraction.

“Jungle Cruise” also offers plenty of laughs—depending if moviegoers are fans of puns. With a dorky-deadpan delivery, Frank delights in saying things like “toucan play that game,” and he points out that certain rocks are “taken for granite.”

Additionally, the movie has a strong moral theme as lying, being dishonest and not trustful are looked down upon. Christian parents can also point out the healing powers of the “Tears of the Moon” is fictional, but Jesus is mankind’s true healer.

Among Disney movies based on Disney theme park rides, “Jungle Cruise” is fairly good—way better than “Haunted Mansion,” but not as memorable as the original “Pirates of the Caribbean.”

On the whole, the Rock and Blunt have chemistry together, which really keeps the movie afloat.

Not recommended for kids under 12.

Positive
Positive—…I enjoyed it for the most part, but I have mixed feelings. Although it’s better than most and is appropriate for both teens and adults, there are a number of elements that may cause concern for some viewers. There is quite a lot of graphic violence. In terms of swearing there are quite a few uses of God’s name (omg).

Disney also brought in another gay character, which is the brother of Lily who comes on the voyage as well. Although this is not said directly, it is implied that McGregor is gay because he says that he dated some women but his interests dwell elsewhere. He said that only Lily supported him but others were preventing him from loving whom he wants to love. This of course is a common misguided societal claim that how you feel is most important and determines sexual morality and preferences.See all »

The movie has a very complex and well written storyline and is not predictable at all, so there are plenty of surprises. There is a magical element and which involves searching for the Tears of the Moon, which is a mythical tree that has petals that “can cure any illness, heal any injury, and lift any curse.”

The acting is well done particularly by Emily Blunt (Lily) and Dwayne Johnson (Frank). Lily is a very strong character who is affectionately called “Pants” by Frank. If you want a fairly clean action film, this is one for you, but keep in mind that there are some offensive or controversial elements.
My Ratings: Moral rating: Average / Moviemaking quality: 4½
KP Jenkins, age 61 (Canada)
Neutral
Neutral—I’ll ditto what everyone else has already said, but I’ll add one additional comment about implied crudeness.

There is one scene in which one thing is obviously happening, but another thing is obviously being implied. It involves an impaled object’s removal, but the wording is done in a way that you’re listening to virgin gay sex for about 30 seconds. Young children won’t notice, but teens and adults definitely will.

I was shocked that Disney would include such a thing!
My Ratings: Moral rating: Average / Moviemaking quality: 4
Chrystal, age 44 (USA)
Neutral—The film itself was largely fun and entertaining, but I wanted to comment upon how Disney has to make everything woke and push the trans/gay agenda. Of course, they exaggerate the sexism of the 1800s, but the bigger problem was the completely irrelevant and pointless scene where a man comes out as gay and is ostracized because “of who he loved.” The scene is irrelevant to the story and clearly just more wokism by Disney. The film can also be rather gross at times, so be aware of this.
My Ratings: Moral rating: Average / Moviemaking quality: 3½
Dr. David, age 50s (USA)
Neutral—It wasn’t the worst Disney movie, but it wasn’t the best. It was a bit slow here and there. It had some funny jokes and fun moments. The propaganda was light, but it was there. There was an “Oh my gosh” at the beginning, and I thought “how refreshing,” but the Lord’s name was taken multiple times later in the movie. Neutral rating for me.
My Ratings: Moral rating: Average / Moviemaking quality: 4½
Trina, age 53 (USA)
Negative
Negative—An action-packed, high-quality CG blockbuster, rife with political correctness. Starts out strong, then gets into the heroines’ effeminate brother not being able to marry a woman because he couldn’t help who he fell in love with. The tribe’s chief was a woman, no big deal, just a political statement. Overall, it was an action-packed ride, but it wasn't good ol Disney.
My Ratings: Moral rating: Offensive / Moviemaking quality: 5
Dennis, age 67 (USA)
Negative—Convoluted, if you liked the 2nd Pirates of the Caribbean you will probably like this film. Movie had promise building on the 2 character leads, just took the wrong turn with the whole (little s) spirits thing.
My Ratings: Moral rating: Offensive / Moviemaking quality: 2½
Steve S. (USA)
Negative—The best part of the movie was the soundtrack which was beautiful. But the story was too long, confusing, and too violent. Children would not be able to follow the story. The portion where the brother is “coming out” was completely unnecessary and was out of place and was just to indoctrinate the audience.

Normally I would look up the virtues of a movie before I view it, but I haven’t watched a modern movie in so long other than the awesome movie “Sabina.” So I neglected to preview if I had I would not have wasted my time… the visuals were pretty good but the violence was overdone and the voodoo and occult imagery and magic are a concern for young viewers.

This movie really had no redeeming value but a false hope… the women sacrificed the saving of the world to save the Rock and resurrect him… interestingly Satan takes from the Word to twist the truth in every subtle way he can… for the true One and only ROCK Jesus Christ did the ultimate act of love He sacrificed his life to save the world and He was raised up from the dead that we all may be raised up. This could be an opportunity to share this truth with people who have viewed this movie.

Disney is no longer a safe movie-making machine they are indoctrinating the children in so many ungodly behaviors and beliefs systems. Be wise.
My Ratings: Moral rating: Extremely Offensive / Moviemaking quality: 4
Sharon M Ulstad, age 61 (USA)