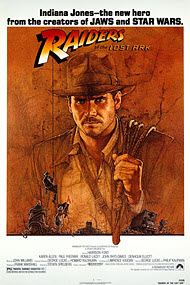 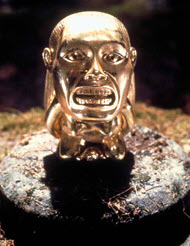 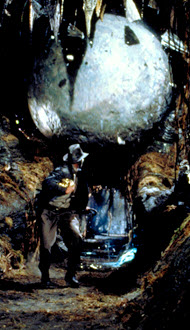 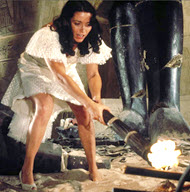 About Egypt in Biblical times

About the Ark of the Covenant

Have you kept each of the Ten Commandments? Are you good enough to go to Heaven? Answer

What does God expect of you? Answer

Why followers of Christ should use The Ten Commandments in evangelism? Answer 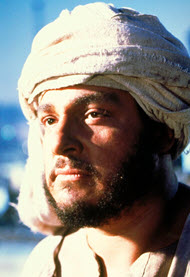 When I think of the countless times I have seen “Raiders of the Lost Ark” and loved it, I get a giddy expression on my face. Here is a movie that takes every element from the old Saturday afternoon serials that mattered and delivers it all with a surprising effect. It encompasses heroes, villains, Nazis, archaeologists, chase scenes, fight scenes, dusty old trucks, temples, Nepal, Cairo, South America, artifacts, the wrath of God and a sense of dry, cynical humour. The reason it gets away with all this is because it doesn’t take itself seriously. Roger Ebert believed that “Gladiator” was just as dimwitted as this one, only “Raiders” is ten times as much fun.

I challenge anyone—Christian or otherwise—to dislike this movie. It reminds us how important it is to apply a sense of humour to even the most uproariously ridiculous and often offensive of situations. The violence is cardboard (you just look at Indy’s punches! He doesn’t even really hit them!!), the special effects are rushed and corny, the sexual situations are hinted at but never followed through (Oscar Wilde: “It’s better to talk about it than do it”), the production design is wildly imaginative but never overpowering and the characters are larger-than-life. If you walk away offended, then I guess it’s a personal distaste, but I absolutely love this movie.

To describe the plot would be a bit silly, because it is a bit silly. All I’ll tell you is that it involves the Ark of the Covenant, a grave-robbing philanthropist named Indiana Jones and Nazis. There is a lot of religious satire in this movie. That could be a big no-no to some of you who will actually see it (and most Christians probably will), but the flip-side of this is an all-out attack on Nazism in a “teenager-with-his-first-handgun” way. Steven Spielberg, as we know, has a personal dislike for the evil of Nazism and “Raiders” was his opportunity to release some of that tension through his medium of film. To me, that is a healthy release.

I do not recommend everyone watch this movie. There are some Christians and also secular people who quite simply will not like it because it won’t be their thing. It’s difficult for some to be willing to scratch below the surface and obtain hidden truths from the movies. And that is a shame because even something as shallow as “Raiders” has its merits. There are a lot of people out there who love this movie and I am one of them. I encourage people to get wise about whether you would like this. It just might get you chuckling.

Positive
Positive—A great adventure movie, one of the all time classics! There is violence and other things one should be cautious about, not for the kiddies! There is a bit of a religious message at the end, which I took to be God destroying those would profane His ark, which held the ten commandments. Spielberg probably means it to say that there is some higher power beyond this world, which should be respected and which we should not profane lightly. A great film!
My Ratings: [Average / 5]

Kevin Burk, age 31
Negative
Negative—As good as this movie may be please be aware it does take the name of our Lord in vain. Our Lord’s name is used as a cuss word. As good as the moviemaking may be, please be aware of that.
My Ratings: Offensive / 4½

Eric C., age 46
Positive—I grew up watching “Raiders of the Lost Ark,” and had the opportunity to see it in the cinema when Paramount Pictures re-released in 2012 to coincide with the 30th anniversary of the film, and just before the fourth film was released nationwide. This is a motion picture best experienced in the cinema. As Indy says, “Trust me.” Raiders has everything you could ask for in a film: action, suspense, comedy, drama, and of course a rousing score best heard in the cinema. The genesis of this classic film is so well known, I won’t cover it here; but I will say that of the four installments, the first and third films stand head and shoulders above the rest. George Lucas (the creator of STAR WARS) and Lawrence Kasdan (who co-wrote STAR WARS Episode V: The Empire Strikes Back) wrote a magnificent screenplay which was masterfully directed by Steven Spielberg, scored to perfection by John Williams and well acted by everyone especially Harrison Ford and Karen Allen.

There is one thrilling stunt in a terrific action sequence in particular which has been imitated ever since this epic adventure was released. You’ll know it when you see it… Biblically speaking, this film has plenty of violence (most of which is not graphic, save for two scenes, including the climax), some moderate profanity (including unnecessary profane uses of God’s Name) and a scene where fornication is discreetly implied. That in mind, I recommend this first installment for discerning viewers.
My Ratings: Moral rating: Better than Average / Moviemaking quality: 5

D, age 30 (USA)
Positive—“Raiders of the Lost Ark” is one of my favourite movies of all time. It is one of those rare and magical movies which you never get tired of seeing. I must have watched it over a dozen times, but it never ceases to enthrall me. It has everything—heart-thrilling adventure, spectacular locales, superb cinematography and background music. It’s two hours of pure entertainment and spectacle.

However, the storyline of the movie is fictional and of a Jewish mythological nature more than being based on actual facts. It is about the Ark of the covenant containing the tablets of the ten commandments. The Ark had long disappeared from history. In the movie the Nazis have discovered the location of the Ark and are eager to take possession of it for their own purposes. Indiana Jones, the famous archaeologist, is also assigned by the government to recover it. After many encounters and harrowing ordeals with the Nazis, Jones recovers the Ark. The movie ends with a spectacular display of divine power emanating from the Ark which strikes down and destroys its enemies.

From a Christian perspective it is interesting to discover what became of the original Ark of the Covenant. There are many speculations, even in some Christian circles, about the possible location of the Ark and it’s significance in the Last Days. But the amazing fact is that the Ark is no longer on earth, but in the true temple of God in heaven (Rev. 11:19) ! When the majority of the Jews rejected and crucified Jesus, the veil of the temple was torn into two at the moment of his death. They then discovered to their horror that the Ark, signifying the presence of God, was no longer in their midst! God had caught up the Ark with Him and placed it in His temple in heaven. So God was no longer in their midst and had deserted them and their temple because they had crucified their own Messiah. And eventually the Romans also destroyed the temple and the whole Jewish religion was obliterated.

So all the myths and legends concerning the location of the Ark notwithstanding, the Ark of the covenant is in the real temple of God in heaven. God revealed this in a vision to the apostle John as recorded in the book of Revelation. The true temple of God is also not a man-made building, but the human heart in which God truly desires to live (1 Cor 3:16, 17).
My Ratings: Moral rating: Better than Average / Moviemaking quality: 5
Uday, age 52 (India)