for some strong violence, thematic and suggestive material, and brief language. 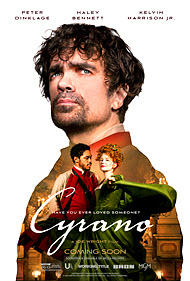 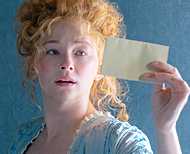 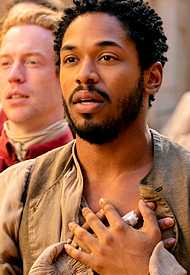 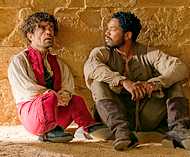 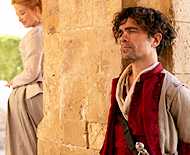 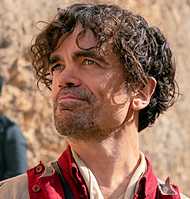 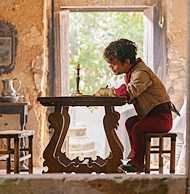 Edmond Rostand’s late 19th Century play, “Cyrano de Bergerac” has the makings of a good musical since the work is itself a song. Written in rhyming couplets, it is a play on words that come together to form a love poem to all things beautiful. And to all things true.

In 1950 Jose Ferrer won an Oscar playing the long-nosed and quick-witted, but unruly and ultimately tragic Cyrano in an otherwise wooden film by Michael Gordon. Gerard Depardieu was commendable in the 1990 French movie version, and Toshiro Mifune was transcendent, and physically realistic (the large nose for once was rendered in a way that made sense) in the 1959 version by Hiroshi Inagaki called “Samurai Saga.” Steve Martin was appealing, and often very funny, in the 1987 Fred Schepisi adaptation named “Roxanne.” The Martin version changed key aspects of the tale, but the actor maintained the long nose as the character’s sidelining defect. His Cyrano (renamed C.D. Bales) could have easily had the anomaly surgically corrected in 1980s America, but was prevented from doing so because of an allergy to anesthesia.

Hmmm. I liked that film, and I liked Martin’s sad-comic performance, but as an anesthesiologist, I’m still puzzled by that plot contrivance. What would he do if his appendix burst?

Peter Dinklage would seem a wise choice to play an outsider whose physical challenges actually enhance his appeal and his panache(a French word which originated with Rostand’s play). Dinklage’s verbal jousting in “Game of Thrones” elevated that often dim-witted and self-conscious video-game TV series to an almost mature level. I saw him play Richard III off Broadway several years ago; the Public Theater production may have been wanting, but he was not. I still remember the scenes of him howling on top of a desk and kicking papers into the faces of his stunned knights. He is one of those rare talents that can command both a stage and a screen. I like that inner flame he gamely ignites, whether in minor film cameos such as “Elf” or major ones like “Three Billboards Outside Ebbing, Missouri.” His smolder can be as fiery as his 4-alarm rage.

Unfortunately, Dinklage misses the mark in “Cyrano.” He should be the film’s focus; instead, he becomes part of the too lavish window dressing. His singing is coarse, a froggy baritone that is unfit for a character whose voice should reach heights that his physical stature cannot. Instead of floating above the melee, his vocal tone adds to the mayhem. However, when called upon to voice lyrics such as: “words are only glass on a string; the more I arrange them, the more they mean the same thing,” it is unfair to blame just him.

In this period-dressed but modern-attitude “Cyrano,” the whirling dervish nature of the camerawork, the music video-like choreography and, most of all, the jarring music made me long for the stagy flatness of the 1950 version where at least an actor could shine. The latest version, directed by Joe Wright and written by Erica Schmidt, is an overworked panoply that makes the busy indulgences of this year’s other musicals: “West Side Story,” ”Dear Evan Hansen,” and “In the Heights” (all box office bombs of epic proportions) seem muted by comparison.

Cyrano de Bergerac, a French nobleman who serves in his country’s army, is, in the original play and in the historic imagination, a man of great sensitivity and great talent who is hampered by one physical deformity: a very large nose. With Dinklage playing the part, Cyrano no longer has an oversized nose. The point is that nothing about his physical appearance is oversized. Unfortunately, neither is his performance. The play’s line about a great nose being the sign of a great man is, of course, left out. The short stature of Dinklage’s Cyrano bars him, he believes, from being what he most wants to be: a requited lover, especially to his “oldest friend” or “dear family relative” (in the play she is a cousin), the idealized Roxanne (Haley Bennett). She is the one person who can soften his heart, a vessel made for poetry and love, but rendered hard and cynical by a world that has belittled, shunned, and worst of all, ignored him.

Roxanne has always been the drama’s weak link because, as written, she is idealized beyond what is human. Less flesh and blood than museum piece, she is wooed by words and shielded from a world of coarseness. Her inner life always seemed untouched, almost mute. Haley Bennett instills her with a new energy, an earnestness that she conveys well in words, if not in song. She almost redeems Roxanne’s worst instinct which is to avoid those realities which sit right under her nose. She believes the mellifluous words which were written by the unhandsome Cyrano but delivered from the lips of the young and easy-on-the-eyes Christian du Neuvillette (Kevin Harrison Jr.). She falls for those words but cannot see the truth behind them, until it is too late.

Mistaking words for reality, and reaching for something beyond that reality, can make for a searing drama. One of Hollywood’s greatest comedies, “The Shop Around the Corner,” employs such a mix-up as the cornerstone of its memorable and often-copied (the insipid “You’ve Got Mail”) mistaken identity love story. A letter can steal a heart but it can also destroy it as other films such as “Miss Lonelyhearts” (1958), “The Go-Between”(1971) and “Dangerous Liaisons” (1988) have shown us.

Our expectations too often exceed our realities and lead us to mix up many things. That is not a bad thing in itself because something inside us knows that this world cannot provide us with the things that our hearts truly want, what they were made for, and what they long for.

We are, indeed, made for something more. Something beyond this physical world.

And herein lies the problem with the current “Cyrano.” The filmmakers search for satisfaction and compassion instead of knowledge and meaning. A reading of the original “Cyrano de Bergerac” does not reveal a tolerant man, one who is accepting of one’s neighbor, prudent in speech or slow to anger. He deflects his own faults and readily projects his anger onto others. He redeems himself by love, duty and honor. He is heroic not because he speaks words, or sings them, but because he lives them, and dies for them.

And speaking of dying, the death scenes, though not lacking in pathos, seem tangential and devoid of deeper context. Settings for a stage production of Rostand’s play require little more than a tavern, a balcony and a tree. We get the balcony scene, but in this version, Roxanne is more Evita than Juliet.

A tree whose changing leaves fall from its branches during a climactic death scene has been key to the atmosphere of the story’s tragedy, whether it is the autumn leaves that drop in the traditional versions or the haunting white flowers that cascade from the cherry blossom tree in the Japanese telling. The image not only signifies the cycle of life but lends a cleansing and forgiving tone to the actions that preceded it. The final set of Wright’s “Cyrano,” scraps the tree and gives us an odd whitewashed antique construction that looks like a discarded set from an outdated “Tosca” production, complete with scaffolding. The scene lacks the tone and the soul of what should be a great dramatic finale, the moment when the mortal coil unwinds and heaven and earth meet. Those falling leaves used to be a sign of the grace that comes from above. It should be a moment that both warms and enlightens the soul, but despite the solemnity the actors bring to the scene, it feels anemic and cold.

The casting of “Cyrano” is modern, voguish and woke (Kelvin Harrison, Jr., is handsome and has prince-like bearing, but his Christian comes off as a wound up jack-in-the-box); however, it is also misguided, unconvincing and as tone deaf as its musical score. Perhaps a story about race being an impediment to wooing an elite beauty could have put some fire into the story the way it did in Tod Hayne’s 2002 Douglas Sirk homage, “Far From Heaven.” But maybe not. In today’s hypersensitive world, that could start a bonfire.

Only Ben Mendelsohn as the determined schemer Count de Guiche comes off as more than two dimensional. His Count is driven by dark egotism but also by love. Whatever his flaws, he makes you understand that, unlike the leading male characters, his love for Roxanne exists in a real world, not one puffed up by poetry and showmanship. He sings as badly as the rest of the cast, but by grumbling and growling his one song, he brings it off perfectly.

Although all the “in” causes are covered in Schmidt’s and Wright’s version, eternal truths are ignored. Rostand wrote a play about the creative powers of love, how eros, whose arrows are meant to generate love, and life, are gifts that provide us not just what we ask for, but much more.

Edmund Rostand wrote of love in the 19th Century:

“To sing, to laugh, to dream, to walk in my own way, free to see things as they are, to speak with a voice that means manhood…never to say a line that I have not heard in my own heart.”

And today we have the lyrics to a love a song from “Cyrano”:

“Why can’t I tell anybody the truth? I’m somebody desperate. I don’t know what to do.”

That is an apt anthem for a desperate movie, a love story reduced to self-conscious affectations and tribal frictions, and sadly, another of this year’s movie-musical failures.

Positive
Positive—I didn’t realize “Cyrano” was going to be a musical. With that, they incorporated certain artistic representations that would’nt have been included otherwise. Such as the choreographed fencing practice and baking of bread. Changing the character of Cyrano, originally a man with a very large nose, to a dwarf or little person, worked. It expanded and made more universal the underlying message of someone feeling unlovable because of—(fill in the blank). It could be any reason. (More broadly, how many non-believers avoid Christ’s love and forgiveness because they feel unworthy or unlovable?)

Peter Dinklage is outstanding as Cyrano. I was impressed by how much emotion Peter conveys, not only with how he delivers his lines and changes in tone, but also with subtle facial expressions and nuanced gestures. For example, the scene where Roxanne meets privately with Cyrano, and he goes from joyously sharing mutual love to crushingly hearing her share her attraction to another man, is heart-wrenching. As the scene unfolds, Peter conveys hope, joy, shock, sorrow, anguish, and more, brilliantly. Beyond “Game of Thrones,” this role as Cyrano highlights his masterful skills as an actor.
My Ratings: Moral rating: Average / Moviemaking quality: 4½
Tori, age 50+ (USA)