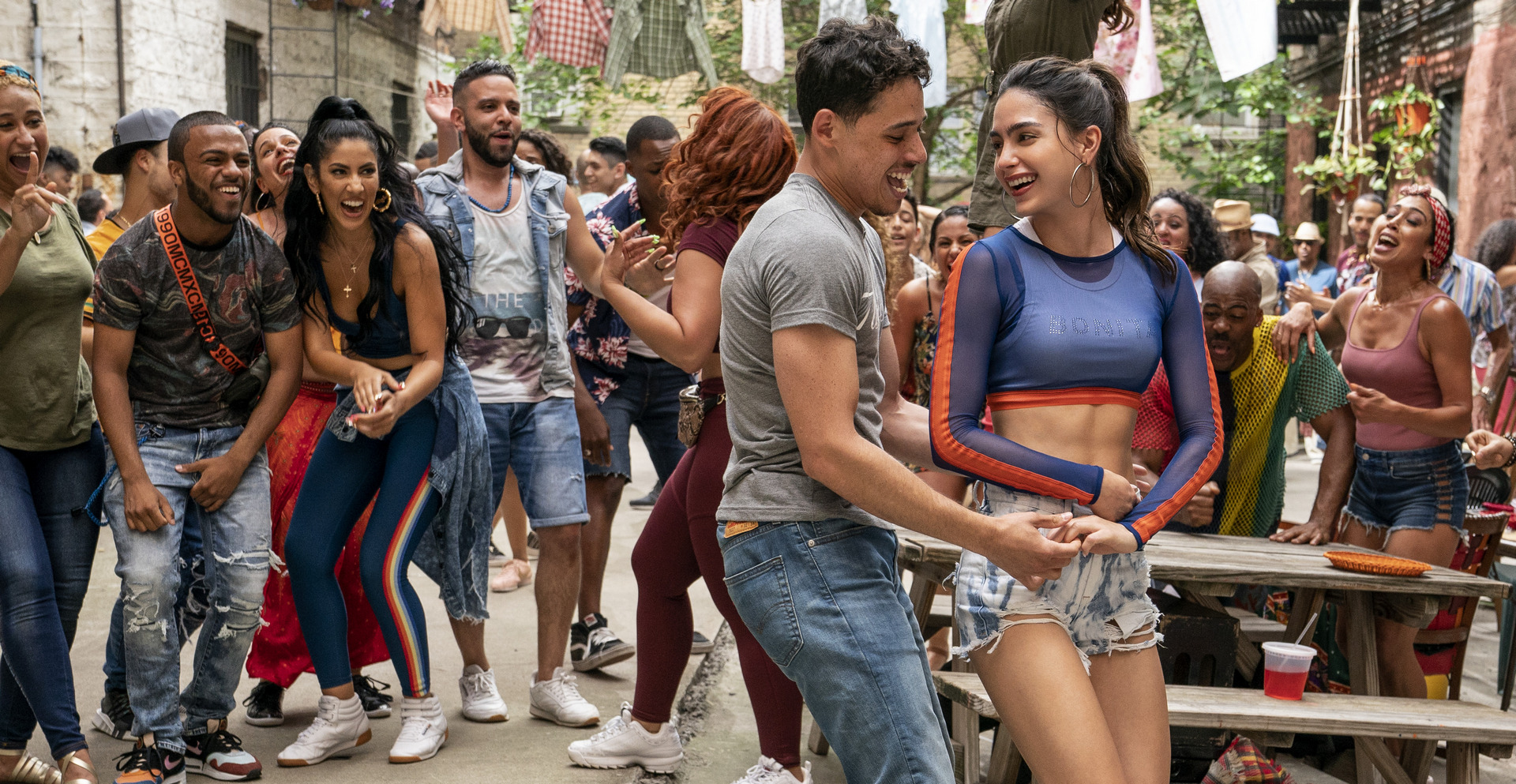 for some language and suggestive references. 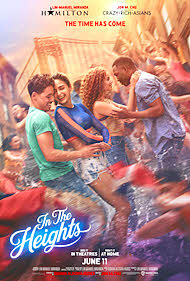 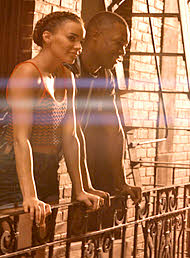 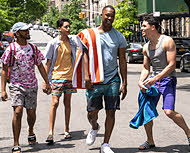 Being immigrants in America

Gentrification of an urban residential environment 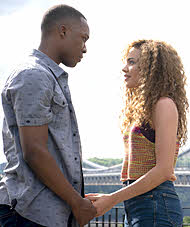 “The time has come”

Take Usnavi (Anthony Ramos), our storyteller, for example. Usnavi has spent his entire life there, maintaining his father’s old convenience store ever since his father passed. However, he dreams of moving to the Dominican Republic and re-building his father’s original shop that was destroyed. How about Tina? Tina has just returned from Stanford University on break, the first in her family to go to college (albeit an ivy league college too), to make a name for herself and, as her father says “represent her community.” Last but certainly not least there’s Vanessa. She comes up with the most creative outfits and designs while also working full time at a beauty salon, but secretly wants more.

Yet all of these characters feel they are bound to the Heights; “afraid of flying” as Vanessa puts it. And so each of them, Usnavi, Vanessa, Benny and a string of others, must ask themselves, “What must I be willing to let go in order to soar? How do I make my dream come true?”

In the Heights is a story of family, community, and never backing down, even during the darkest of times…

I was there when the original staged production of “In the Heights” hit Broadway. It was 2008, I was young and still in college. I was on a class trip with my classmates to see the production and on the way down we and the Professor were talking about the production. At the time, none of us knew anything about Lin Manuel Miranda (he was still an unknown name at that time) or even much about the show, but we were excited because we had heard some really fantastic reviews about the production.

The staged version of “In the Heights” was much less bombastic than the film version. There were much fewer scene changes, the sets were smaller and I don’t recall as many musical numbers, but you could still hear and feel the energy of the music coursing through the auditorium and you couldn’t help but smile and tap your feet as the music began to move you. When you walked out of the theater you felt as though your perspective on musical theater and, a little bit on life, changed.

I give you all of this in part, to state that the film version, “In the Heights” still carries a lot of that same energy and emotional drive that the staged version brought. While many of the characters on screens, themselves, are young, the lessons they carry are lessons for every age. Lessons on: finding strength in one another, trust, charity, unconditional love, compassion and acceptance for who we are (both politically and not politically motivated. More on that later).

Cinematically, the film is purely brilliant. The transition from stage to screen is breathtaking. I’ve always believed Lin Manuel Miranda likes to “go big or go home” with his musicals in terms of how the music is scored, how large his sets are and how the scenes are played out (does Hamilton come to mind?) So it is only appropriate that Miranda hired Jon M. Chiu to direct this, since Chiu recently directed Crazy Rich Asians (another brightly-colorful somewhat lighthearted film). Every scene is made to stand out on it’s own and the three intertwining scenarios are allowed to be appropriately developed on screen (like they were on stage). The pacing of the plot did drag in a couple places as to be expected (bear in mind that the film is staying true to the actual stage musical, with a run time of two and half hours).

There are a few issues I have with the film, which should be for your consideration as well, The first is the dancing in the film. The dancing in the film does come extremely sensual in multiple cases (in fact I almost winced a few times). If I had to take issue with anything else in the film, it would be the language, which honestly, I don’t recall nearly, if any language, was used in the staged production and the sexual dialog. It was unnecessary and without it, the film could have been given a “Better than Average” or close to an “Average” rating.

Sexual Content/Sexual Dialog: In the opening many couples are seen waking up in bed kissing each other, including a same-sex couple. One of the women at the beauty salon is a trans-woman. There are a couple moments of gossip about who slept between women at a beauty parlor. Other dialog includes someone stating “that guy has quite a big… taxi” and the phrase “sexual tension.” Characters are seen kissing in a couple other moments in the film. As I stated, much of the dancing in the film is very sensual (bottom and chest thrusting). Women are also objectified quite often in the film.

Nudity: One character is seen changing into other clothes (we see her in her bra straps briefly). We see some shirtless males and women are seen wearing some pretty revealing clothes and swimsuits.

Alcohol: There are several scenes where characters are seen drinking alcohol (including at a bar and a family party).

Other: There is some messaging embedded within the film-musical regarding diversity, inclusion and political messaging regarding rights for illegal immigrants, particularly for Dreamers.

As I stated earlier in the review, I believe one of the largest messages that can be drawn from “In the Heights” is the message on the importance of family and being there for each other in the darkest days. Usnavi and everyone in Washington Heights, in one particular scene toward the end of the film, are suffering through a terrible tragedy within their community in the midst of a community electricity blackout (no worries, the blackout is not a spoiler). Yet instead of panicking and attacking each other, they light fireworks to create light in the sky, they turn the lights on their cars to light the roads so people can find their way home. They band together. It’s one of the most beautiful, most excellent choreographed moments in the entire film.

We, as Christians, are called to be in fellowship with one another, to share in our joys and our hardships with other Christians it’s true, as we are all part of God’s family. When we pray and support each other, as a community of believers, we strengthen our faith in Him and because our faith becomes stronger, our fruit that we bear is more pleasing.

“Carry each other’s burdens, and in this way you will fulfill the law of Christ.” —Galatians 6:2

But if we only maintain company only with other Christians, our faith doesn’t mean much. We have to be an example for Christ to everyone. We have to be in the world, but not of the world.

“And do not forget to do good and to share with others, for with such sacrifices God is pleased.” —Hebrews 13:6

“Give to the one who asks you, and do not turn away from the one who wants to borrow from you.” —Matthew 5:42

My mind has been going back and forth for the past several hours now as to whether or not I recommend “Into the Heights.” If you take out the language and the worldly sensual dancing, you have a breath-taking film with beautifully choreographed dances, heart-pounding numbers and new takes on timeless messages that, honestly, are needed right now in a world that is recovering from a year of nothing but heartache and suffering.

And yet, I have to base my recommendation on the film AS IT STANDS, not for what I want it to be. So, as it stands, this film is borderline between Average and Offensive and because of this, I would ONLY recommend this film for viewing by adults and older teens. Overall, I’d say, “In the Heights” may not be worst way to spend an afternoon.

Comments from young people
Positive—A lot like “Hamilton” in that it was like this: fabulous music and visuals, and messages. The inappropriate content was what was problematic. Lin is a fabulous songwriter and creator. He already stands out from the world with his talent, but he could stand out even more if he would only cut the language! :(Nevertheless, it’s in there. Teens +.
My Ratings: Moral rating: Very Offensive / Moviemaking quality: 5
Madeline M., age 16 (USA)