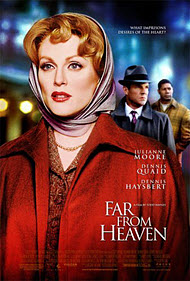 What’s wrong with being gay?

What should be the attitude of the church toward homosexuals and homosexuality?

Can a gay person go to heaven?

Questions about Race and Racial Issues

More from our Sex, Love and Relationships homepage

Am I good enough to get to Heaven?

Tim Wilkins of Cross Ministry is a Contributing Specialist for ChristianAnswers.Net. Read more about how to minister to homosexuals by visiting Tim’s site.

I wish I could give this film more than a four star rating for its artistic achievement. The actors did their best with a script that does not present the depth of characterization that the themes addressed by “Far From Heaven” require.

Julianne Moore is splendid as Cathy Whitaker, the perfect housewife of Frank Whitaker, played by Dennis Quaid. They live in an upper middle class neighborhood in Hartford sometime in the 1950’s, when Eisenhower was president. The comparison with the “Leave It To Beaver” TV program is inevitable, with the seemingly perfect household and a mother who is always in high heels. However, the dark parts of their lives begin to overshadow the slick and polished look and feel of their daily lives.

Frank is drawn to men. Soon his homosexuality is discovered. Cathy, in turn, finds solace with an African-American gardener, Raymond (Dennis Haysbert), at a time when social contact between the races was not accepted even in the North. These are the two main themes presented.

Intended to be a provocative and provoking examination of the mores of American life in the 1950’s, the movie remains surprisingly shallow in its treatment of its subject matter. Yes, the lives of this couple do fall apart, as the couple faces Frank’s sexual life. Both Moore and Quaid eke as much out of their parts as they can. But the lack of adequate motivation for their actions, the inconsistencies and the stereotypes of the characters, give an unfortunate cartoon-like quality to this film, which has been very highly acclaimed by secular critics. 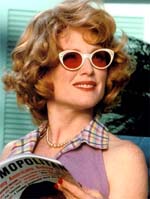 Maybe the acclaim comes because of the moral of this story, namely, that nature is superior to artifice, that gut feelings (homosexual urges) are superior to moral structure and self-restrained manners. This is the spiritual context in which this melodrama plays out. It concludes that living according to the truthfulness of your fleshly desires is better than any kind of moral order that would restrict raw emotion. The fallen world would agree with the message delivered by the screenplay; the Christian needs to remember the pitfalls of this kind of message.


Positive
Positive—“Far From Heaven” is a thoughtful, beautifully acted and filmed study of people struggling to find themselves in a highly rigid society that required conformity at the expense of individuality. I was deeply touched by the concept of the real courage it takes to be one’s self, in spite of the possible disapproval of others. While not espousing Christian values, this is a very spiritual film from a secular stand point.

Morris, age 50 (USA)
Negative
Negative—After being unexpectedly exposed to intimate homosexual sensuality, I left the movie theater, disillusioned and disgusted. Unfortunately, it was playing to a sold-out audience in a liberal, artsy theater. This movie seemed to be created for the purpose of propagating leftist beliefs to unsuspecting viewers. If you watch this movie as a Christian, be prepared to be offended by the assumptions made that morals are merely traditional and that truly living comes from responding to your basic instincts. Trust me, it’s not worth your time and money to be subjected to this worldview.
My Ratings: [Extremely Offensive / 3]

Faith Gerriets, age 25
Negative—“Far From Heaven” borrows some of its plot and some of its title from a 1955 Douglas Sirk film called “All That Heaven Allows.” The difference in the title names says a lot.

In the 1955 film, Jane Wyman causes a scandal in her staid New England town when she develops a friendship with a young gardener (Rock Hudson) after her husband dies. Sirk’s film acknowledges that there are boundaries of behavior that society needs to acknowledge in order to maintain itself. Christians might think of those boundaries as the Commandments which should be obeyed in order to preserve God’s law.
Sirk, however, was not a preacher. He studied the effects of those boundaries on people’s lives, and criticized society’s tendency to live according to rules merely on a superficial level. A lot of people laugh at films like “All That Heaven Allows” today—or at other Sirk films such as “Imitation of Life” which I admit is overstylized and at times overwrought, but it has a strong moral center, and has a character who speaks of heaven (quoting from Revelation) as a concrete, non-abstract entity—but I find it more rooted in reality than the confused nondescript “Far From Heaven” (I agree wholeheartedly with the reviewer’s assessment).

Haynes’ film glorifies the breaking of sexual codes and taboos (how original for a Hollywood movie!) and self-righteously condemns convention and social structure, as if the film community had no conventions or social rules of their own. Such cheap backhanding hurts the film by immediately ruling out any benefit to exploring the subtleties and the ambiguities of a culture.

This movie, and most Hollywood films, certainly are “far from heaven,” and they’re getting further away all the time.
My Ratings: [Very Offensive / 2]