for bloody horror violence and gore, language throughout and some sexual references. 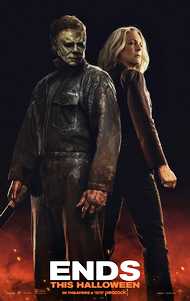 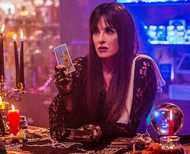 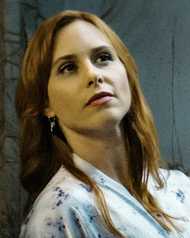 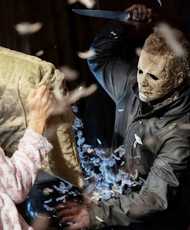 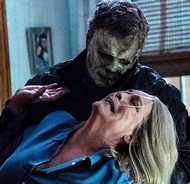 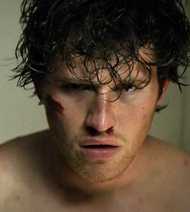 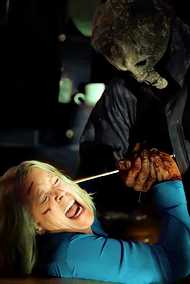 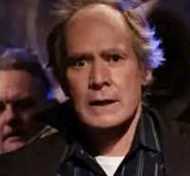 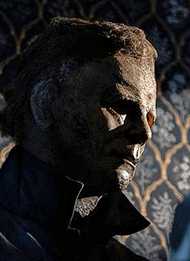 It’s been over four years since Michael Myers has terrorized the citizens of Haddonfield, Illinois. Just as a recap, back in 2018, Michael Myers resurfaced and went after not only our female heroine, Laurie Strode (Jamie Lee Curtis), but her daughter (who was killed by Michael), her granddaughter, Allyson (Andi Matichak), and numerous other citizens of Haddonfield. Ever since, no one has seen Michael. However, that doesn’t mean things have remained peaceful.

On Halloween night, in 2019, for instance, 21 year old Cory Cunnigham (Rohan Campbell) was babysitting a young boy, Jeremy, while his parents were attending a party. To make a long story short, Cory sent Jeremy to bed early, Cory was tricked into going to the attic and locked in there and the next thing you know Jeremy falls over the railing of the stairs and to his death. Who’s to blame? The babysitter of course. There always has to be someone to blame.

Fast forward back to the present. Corey and Allison meet and become interested in each other. Laurie, who has stepped in as Allyson’s caretaker after her parents’ death, has become suspicious of Cory, as Cory shows many characteristics of someone VERY familiar to her... Michael.

It’s been 42 years since Laurie Strode first encountered Michael Myers. The Halloween series, consisting of over 13 different films, has served as an cinematic masterpiece and redefined the very essence of the slasher film (how the characters were to behave, how the camera shots should work, the plot, and of course the role of the “final girl.” It’s true that, as other critics and historians have pointed out, while other films had started to bring the slasher genre into Hollywood (such as the 1974 “Texas Chainsaw Massacre”), “Halloween” (1978) brought the slasher genre into true popularity.

To watch such a iconic series come to an end (if that really is the case here) brings a sense of, yes, sadness, but to this reviewer, a sense of relief, particularly since this reboot trilogy (the 2018 “Halloween,” the 2021 “Halloween Kills,” and now “Halloween Ends”) is arguably one of the most graphic, obscene and horrific trilogies I have ever laid eyes on. Please allow me to elaborate.

As I was watching “Halloween Ends” today, I was sickened at the appalling levels of gore on screen (there is actually a scene where we see a man’s tongue ripped out while he’s alive, not to mention the on-screen death of a young boy!). I also thought about how the violence, in addition to the other offensive content (language, nudity, etc.), was far less frequent in the original 1968 “Halloween” than what has been displayed in each of these rebooted films. To put it simply, I’m glad I didn’t eat much while I was in the theater.

In addition to the horrific displays of violence, the messaging of the film (which I’ll discuss more later) is clear: evil begets evil. If we’re not careful, we can create our own monsters just because we need a monster to fight. This message is a constant presence throughout the film, but does not raise the film up, or shall I say lead you to believe that goodness will triumph in the end. As I sat there I said to myself, “So what if the ‘good guys’ win? (are there really any good guys here?) There is so much death and despair on screen and the message is so bleak that no one really wins.” In essence, you walk out of the theater FAR more depressed and discouraged than you walk in.

To the film’s credit, and I promise not to spoil anything, the overall tone and pacing, as well as story, made me feel like this was the end of an era. Additionally, I felt the twists (there are a couple) were genuine and just enough to keep my interest piqued. The performances by many of the characters are, by far, the strongest of the three reboot films. Rohan Campbell made an excellent addition to the franchise, as his performance was simply masterful and, at times, down-right spine-tingling. The only exception is Jamie Lee Curtis’ performance. Truthfully, I feel she was underutilized in this “final” installment. I also appreciate the “Easter Eggs” (there are two that I found) from previous Halloween films that made their way into “Halloween Ends.” Now, onto the content for concern...

VIOLENCE: Extreme. *Please note I didn’t list everything. I did get most of it though. Graphic descriptions of violence are ahead. Reader discretion is advised*

A person has his eyes gouged out. Someone is burned to death by a blowtorch. A man has his head smashed and his tongue is cut off on screen (we see his tongue spinning on the record player). A boy graphically falls to his death from a balcony staircase (we see the pool of blood and his smashed head). A body is put through a shredder. We see some flashbacks from previous “Halloween” films and there is some graphic violence in those flashbacks. We see a corpse hung by a rope. We witness a dead body in a car. A character has a glass cup shatter in his hand and gets cut by the glass (he requires stitches and we watch the procedure later). Someone is almost choked to death. A man is stabbed and killed (self-defense?). We witness what looks like a fake suicide but is really a trap for someone. A man’s throat is sliced and his chest is stabbed multiple times. A doctor is stabbed multiple times to death. A nurse is choked then stabbed. A mom slaps then kisses his son on the lips. A person is run over by a tow truck then has their face smashed in. Someone is shot in the head. A character is killed off-screen. Someone tries to kill themself and then is later killed. There is a major fight scene where someone is held to a table with four knives in them and a fridge, and slowly killed.

SEX/NUDITY: Someone says a woman should undress, show your “f***ing t*ts.” Someone mentions another person had sex with an old lady at a nursing home. A couple wake up in bed together (it is implied they had sex). A doctor at the hospital where Allyson works is having an affair with a much younger nurse. We see them go to his home, and the woman walks into another room to take a shower. She’s initially wearing a slinky dress, then a silky robe, but we don’t see her fully undress. There’s a picture of a bikini model. A DJ reads a pornographic magazine on the air. A man undresses and can be seen in the underwear (very briefly). A couple wake up together (we see a little of their bare shoulders).

ALCOHOL: Characters are seen drinking alcohol in multiple scenes. Some high school seniors ask someone of age to buy beer for them from a convenience store.

OCCULT: On two occassions, some girls are seen playing with tarot cards.

OTHER: Some parents mention their son has bed-wetting issues. A babysitter lets a boy watch the movie “The Thing,” particularly the scene where the monster grows out of the person’s stomach and the man’s head stretches out. A doctor gives a nurse a promotion because they are in a relationship. A bike is stolen by a character. Characters parade around a dead body before putting it in the shredder. There is some bullying.

The moral of this movie, as I said earlier, is that if we let our anger, our fear fester it can become unchecked and become something far worse. In “Halloween Ends,” Michael Myers’ absence for four years left a void for the people of Haddonfield. When the young boy was killed in 2019, the citizens had to focus their anger on someone else... Corey. He became the new social outcast. He became the new monster.

When we feel overwhelmed by these conflicting emotions, our enemy, Satan, is trying to tear us apart from God. He is trying to shake our faith; to doubt Him, to question Him and to curse Him. We must resist the enemy at all costs, especially in our darkest hour!

“Submit yourselves therefore to God. Resist the devil, and he will flee from you” —James 4:7

“Be sober-minded; be watchful. Your adversary the devil prowls around like a roaring lion, seeking someone to devour.” —1 Peter 5:8

So, how does one resist the Evil One?

“Put on the whole armor of God, that you may be able to stand against the schemes of the devil.” —Ephesians 6:11

“Therefore take up the whole armor of God, that you may be able to withstand in the evil day, and having done all, to stand firm” Ephesians 6:13

“In all circumstances take up the shield of faith, with which you can extinguish all the flaming darts of the evil one.” —Ephesians 6:16

I suppose all good things must come to an end. Truthfully, was there anything GOOD to be found in the Halloween series? Were there any lessons to take away from the series? Perhaps a little, here and there. Whatever messages did appear in the film, whether positive or negative, were always overshadowed by aggressive and graphic, gory violence, heavy amounts of vulgar language and sexual content.

As a stand alone film “Halloween Ends” will likely serve, as many reviewers have stated, as a solid conclusion for fans for the franchise, with perhaps only a few questions left unanswered. It goes without saying that “Halloween Ends” is EXTREMELY gory, vulgar and just incredibly offensive to devout Christians, both teens and adults. I urge you to not subject yourself or your family to such filth. Please also note that the stars do NOT warrant a recommendation (they are based on cinematic qualities of the film ONLY). I conclude with Paul’s warning...