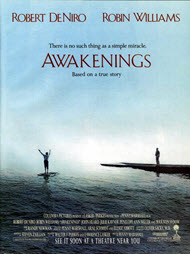 This dramatization of a doctor’s struggle to help victims of a brain disease is well worth seeing, but not suitable for young children. The story is fact-based although the names are changed and some of the events are fictionalized.

In 1969 Dr. Sayer (Robin Williams) takes a position at a chronic care hospital even though he’s an introvert loner and is more comfortable doing research on earthworms than treating humans. Yet because he’s an outsider with a fresh view, and perhaps because he identifies with the withdrawnness of many of his patients, he notices things that the rest of the medical staff has missed. In time he realizes that several unresponsive patients are suffering from the aftereffects of an encephalitis infection when they were children. Bucking conventional wisdom at every turn, he searches for drugs and therapy that will give his patients their lives back. Robert De Niro gives a tremendous performance as the first patient to receive a new treatment. Emotionally gripping throughout and more sad than happy, but very worthwhile.

There’s no sexual content. Profanity is very minimal, although it’s annoying that the single use of the f-word is in one of the most joyous scenes. The portrayal of patients trapped inside malfunctioning bodies (a mix of actual patients and actors) will be upsetting to some people although it is realistic. A scene where Dr. Sayer helps a patient who can’t control his body movements to communicate by using an Ouija Board might make some viewers wonder who’s actually doing the communicating; personally, I assume that if this event took place, that would have been the only kind of spelling board handy and no occult significance should be read into it.

From a Christian perspective, the most important point of the film is that everyone (even someone who can’t interact with others) is a person and deserves respect. In an exchange between Dr. Sayer and an older researcher (Max von Sydow), Dr. Sayer asks “What’s it like to be them? What are they thinking?” The answer is that they’re not thinking, because the virus wiped out the higher brain functions. How do we know that? “Because the alternative [that there’s someone still inside that body] is unthinkable.” Dr. Sayer’s fight for his conviction that there really is “someone in there” is uphill all the way, but he’s proven correct. This same entrenched mentality (that if someone can’t respond, he’s not a real person) is faced every day by those in the pro-life movement. The other major point is the preciousness of all the things in life that “ordinary” people take for granted.

This is a film with two of my favorite actors: DeNiro and Robin Williams. It is very moving and life affirming. I still hold this as Robin Williams’ best performance. It really showed his versatility as an actor that doesn’t always have to be maniacally funny. I wish there were more films like this.
Don Lambirth, age 31
This film deserves much more publicity than it apparently has had. It is one of the most powerful, moving films I have seen, but while people have heard of it, no one seems to recognize how effective it is. In comparison with “Patch Adams,” another movie with Robin Williams as a doctor, this film wins with no contest. Gone is the weepy, false sentimentality and contrived, ridiculous cheap laughs. This film is honest and real, and everyone should be able to relate to the struggles in both Williams' and DeNiro’s chracters. I cannot say enough good things about this wonderful work of art.
Mike Larson, age 18
This is one of my all-time favorite movies, and the best performance in Robin William’s career, in my opinion. Robert De Niro is also brilliant. A very good movie from a Christian perspective. This is one of the few movies ever made that may actually change your life.
Timothy Blaisdell, age 35