for sexual material and language.

Reviewed by: Brian A. Gross
CONTRIBUTOR 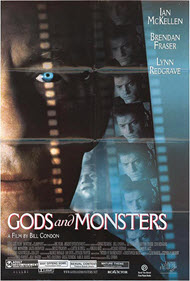 Can a Gay or lesbian person go to heaven? Answer
If a homosexual accepts Jesus into his heart, but does not want to change his lifestyle, can he/she still go to Heaven?

“Gods and Monsters”, directed and adapted by Bill Condon, is the story of famed Frankenstein director James Whale. Needless to say, he was a man of “issues,” as the psychologists would say.

Mr. Whale (Ian McKellen) is now retired from films and moves about his small estate in perpetual airs. He is not wealthy but lives comfortably in a good area, employing a maid and a gardener. His new gardener, Clay (Brendan Fraser) is of particular interest to him. A strapping young man less than half Whale’s age, he arouses homoerotic feelings in the older man. The years have not banked his libidinal fires and the old man lusts constantly after male bodies and has recurring dreams of his past days as a Lothario of the same sex. He immediately invites Clay in for tea and wonders if he might do a sitting for him to be drawn. Clay has an “aw, shucks” Midwestern sensibility about him and is hesitant but could use the extra money.

He is fully heterosexual and is not too slow of mind to understand that Mr. Whale wants more from him than just to sit. Eventually he does tell Clay—with the help of Hanna (Lynn Redgrave), his maid—that he is Gay but never does he totally reveal himself. He seems incapable of being sincere but is most genuine around Clay; dropping his pretentious manner and confiding in him stories of a poor childhood, and of past loves during the War.

The interesting thing is that Bill Condon is not sincere either. He does not flesh out James Whale as a fully realized human being with faults. More to his purposes seem to be dual: to have a coming out party in the form of a film (Ian McKellen is a homosexual—the first to ever be nominated for an Oscar® playing a homosexual—as well as an executive producer) and to provide homage for a boyhood hero.

Sex and Nudity: Implied sensuality and lust throughout. One scene of fully nude men at a pool party including full frontal nudity. / Violence: Several non-graphic flashbacks to World War I. / Language: Profanity and obscenities peppered all through.