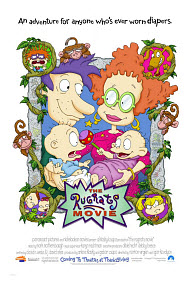 “An adventure for anyone that ever wore diapers.”

Tommy Pickle gets to learn about “sponsitility” of being a big brother upon the arrival of Baby Dil (short for Dylan) in “The Rugrats Movie”. More importantly, he gets to learn how to love someone who is not always so lovable. He learns to think more of someone who needs him than himself. He learns these valuable lessons in the middle of one of the Rugrats biggest adventures yet—a two-hour animated movie debut of the much-loved Nickelodeon television series “Rugrats”.

Tommy and his pals, twins Lil and Phil, his best friend Chuckie and his cousin Angelica are quite familiar with adventures. They always seem to elude the watch of parents and grandparents and wander into the land of discovery. This adventure begins with the birth of Baby Dil. Dil’s entrance shakes the foundation of the group of babies who have all settled into their respective roles. A bespectacled Chuckie is extremely cautious about everything making him the fraidycat of the group. Lil and Phil maintain sibling rivalry, but are fiercely loyal to each other when someone else challenges them. Angelica is the bratty know-it-all who does her best to reign supreme over the babies as children often do. The babies usually get the best of Angelica and in this movie, Dil is getting the best of them all.

Therein lies the conflict. As Tommy’s inventor father, Stu Pickle, convinces Tommy that Dil is worth more effort in trying to love, the rest of the gang—Lil, Phil and Chuckie—are plotting to return Dil to the hospital and get a different baby brother for Tommy. They figure it’s just like taking a toy back you don’t like. So, they load Dil into Stu’s latest invention, a toy wagon with tons of special effects called Reptar, and are about to take off when Tommy returns. Tommy climbs aboard to try to stop them, but before that happens they are out the house on their way down the street to the most exciting adventure yet. Angelica would have been totally uninvolved except that Dil “borrowed” her favorite doll “Cynthia”. Angelica slaps on her sleuth outfit and roller skates, and hijacks the family dog to track the babies.

Stu finds out about the babies' disappearance only moments before his wife comes home. Because they were about to ship the toy wagon to Japan, they think the babies were in the box and got shipped with the toy while Grandpa Lou Pickles was sleeping. A media blitz ensues. Television helicopters and sleazy journalists descend on the Pickles home and a community search by family, friends and officials begin. Meanwhile, the babies have many dangerous and funny encounters in the woods with a menacing wolf and funny but hungry circus monkeys. The tension really mounts between Chuckie and Tommy as Tommy takes care of Baby Dil.

The “Rugrats” writers skillfully show the feelings of jealousy and loss when forced to share the love of someone close to you. In the end the babies all reunite to ward off the hungry monkeys and escape the menacing wolf. By the time they are reunited with their parents, the babies have already saved themselves from danger over and over again. Those who are familiar with Rugrats the cable show will be familiar with the animation style; the movie did not vary much in that respect. Look for similarities drawn between other big screen movies like “Indiana Jones”. The dialogue is smart and the writers managed to handle potentially sensitive issues for young audiences with wit and humor like where babies come from. This film is one the entire family can enjoy. Indeed, I found myself laughing out loud in the theatre.

Because Tommy learned how to love his younger brother and the other babies learned how to share their friend Tommy with someone new, this movie is a gem of positive moral values. There were no sex scenes. Even toddlers can appreciate this movie. I cannot recall the Lord’s name taken in vain. For that alone this movie should get nominated.

Positive—This movie is one that tries to show the world through a baby’s eyes. There are several references to “Bob” which if taken in the context that it is always the babies who say it, probably refers to God. *I know several small children and toddlers who cannot say God, because they can’t pronounce the letter G yet, which leads to them saying “bod” “od” and sometimes “hod"(Trying to say God). Aside from that, there is nothing morally wrong with the movie. They do have a reference to sexual body parts, when the moms ask a fellow mom if she knows if the baby she is carrying is a boy or girl, but they stop the characters before they say any inappropriate words.
My Ratings: Moral rating: Good / Moviemaking quality: 5

Teresa Marie, age 24 (USA)
Positive—I agree with Mia on every aspect of the movie. A true family gem indeed that had my wife and I laughing our heads off. The baby language is almost funnier in the movie than in the TV show. But I do have two complaints about the movie however. The babies make reference to “the lizard” who is obviously a wizard that will grant them a wish to get home. Obviously, this doesn’t hold with Christian doctrine.

The second is the very quick reference to the method the mother wishes to have baby Dill: The Zen Method. Anyone that is informed on their world religions knows this is a form or sect of Buddhism. Of course children watching the movie probably won’t catch the latter, but parents should be aware of the casual mentioning of wizardry which is plainly refuted in scripture. Overall, though, TWO THUMBS UP!!

Nelson, age 26
Neutral—What about BOB? I guess it’s an ongoing Rugrats joke. They replace they replace God with the word Bob, in various statements. Instead of saying “Thank God” they say “Thank Bob.” There is also a song in the movie called, “A Baby is a Gift from a BOB.” I’ve checked on the album. It does say “a Bob,” not “above.” I did like the movie, but that kind of sticks in my craw. Perhaps, I am being too critical.

Tony Padilla, age 31
Positive—Although its overall look did not differ that much from the version one can see on the TV, this movie was clean and amusing and worth the time to watch. When faced with so many difficulties in choices about movies, it is good to find those that are easy decisions. As Christians we should support movies that encourage character traits like love, friendship and family. This was just such a movie. I recommend it.

Gene Fend, age 38
Positive—I really liked this movie (probably more than my 4yr old). There aren’t a whole lot of movies out there these days that I can take my 4yr old to see. Even though she gets to see the cartoon on TV, it’s a real treat to take her to see the “big, big, TV” We really enjoy the time together. Something we can both like. I would recommend this movie to anyone who is truly a child at heart or to anyone who wants to see their child smile:)

Aprill Childers, age 26
Positive—I thought the movie was refreshing and fun. My young children were kind enough to take me with them. They bought the popcorn and coke while I sat back and enjoyed the adventures of Tommy, Chuckie, Angelica and the gang. Well, not exactly like it happened, but I did laugh and have a great time. It’s nice to be able to take my kids to a movie, we can’t go to often because there aren’t enough G rated movies out there.

Sue Porter, age 41
Negative—The Rugrats Movie was inappropriate for a couple of reasons. Mostly because of the insinuations of male genitalia. Angelica’s mother almost says the “P” word in the beginning, and numerous babies look down their diaper and make crude jokes referring to their genitals. I, for one ,had to stop the movie after the second joke. My 4 year-old daughter doesn’t need to hear such talk, even though it might fly over her head. Of course, I gave it a second chance, and my wife and I watched it, and I guess I’m just a prude, but I couldn’t get over the rude insinuations.
My Ratings: Moral rating: Average / Moviemaking quality: 3