Today’s Prayer Focus
One Against the Wind
MPA Rating: 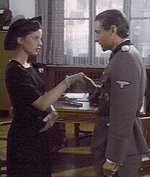 This well-done Hallmark Hall of Fame made-for-TV movie dramatizes the true WWII exploits of Mary Liddell (Judy Davis), an independent-minded British Red Cross nurse living in France. I would not recommend it for young children, but for older viewers it entertains while giving us an appreciation for courage and sacrifice.

Liddell, who was decorated for her service to injured soldiers of both sides in WWI, could have “sat the second one out” and just minded her own business—as the Nazis occupying most of France advised all civilians to do. Instead, she chose to become involved in the underground, helping to smuggle downed Allied pilots out of the country. We see the conflicts within her family over her activities, as well as the disagreement between the SS and the regular German army over the proper punishment for someone who’s just doing what she believes is her Red Cross duty. The film is thought-provoking in a number of ways.

Bad language is not a serious issue, and there is romance but no sexual content. Since Liddell is separated but technically not divorced, the budding relationship between her and a pilot (Sam Neill) could have been omitted without harming the film. There are some killings by firearms (one with bullets-thudding-into-flesh special effects) and some scenes of injury and suffering. The ending is positive, and the virtue of serving others even when it’s not convenient is a central theme. Overall, this film is worthwhile for anyone old enough to appreciate the subject matter.

An excellent choice of entertainment! This one is clean and well worth your time, especially if you are a history buff or interested in WWII. My wife, grandmother and I all enjoy this well-made film. My Ratings: [3½/4]