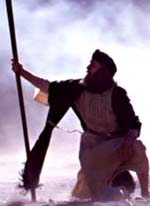 In the tradition of Cecil B. DeMille’s sweeping epic “The Ten Commandments,” the earliest stories of the Bible come to life in “In the Beginning.” Covering such stories ranging from Creation to the Ten Commandments, this NBC four-hour miniseries features an all-star international cast.

Filmed in Morocco and Budapest, Hungary, “In The Beginning” focuses on the books of Genesis and Exodus, compellingly weaving together some of the best-loved stories from the largest selling book of all time, the Bible. Two thousand years before the birth of Jesus Christ, charismatic figure Abraham leads his followers to a new land, encouraging them to stop worshipping false idols and instead believe in one true God. Even when God puts Abraham’s faith to the ultimate test, asking him to sacrifice his beloved son, Abraham’s devotion is unwavering, inspiring his followers and descendants to share his belief that his God is the only God. 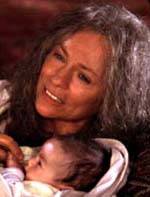 From one generation to the next, God’s word and covenant are passed verbally, from Abraham to Isaac through Jacob to Joseph and Moses. Favorite Bible tales, including the story of Adam and Eve; Joseph’s coat of many colors and his jealous brothers who sell him into slavery; and Moses’ struggle to free his people from Egyptian rule—including his miraculous parting of the Red Sea—are dramatized.

All I have to say is…“Thank God it was no Noah’s Ark”! This one was superb in every sense of the word. The best Christian TV movie that I have seen in a long time! My Ratings: [Excellent / 5]

Adam, age 18
Pretty good for cable. We rarely watch television anymore because of the constant taking of the Lord’s name in vain, as well as the abundance of immoral lives portrayed. Was I skeptic? Yes. But we enjoyed this one as a family. I would honestly say this movie honored God. My Ratings: [Good]

Joy
After the absolute massacre of the story of Noah, about two years ago, with Jon Voight in the title part of “Noah’s Ark,” NBC has somewhat made up for the sacrilege of the former mentioned miniseries. Largely an overview of some of the major stories of Genesis and Exodus, there was not really enough time to give an adequate telling of each story. I did not find anything of offense, and enjoyed the unique telling of Creation by Abraham, even the special effects. For a modern Hollywood attempt at filming the Bible it was pretty well done! My Ratings: [4/4]

Todd Cashdollar, age 37
I really enjoyed this show. It doesn’t cover everything, but I like it unto a Cliff Notes for the Old Testament. NBC was upfront and told you that it wasn’t completely accurate, but in a day and age where Hollywood wants to twist every bit of scripture, this film was pretty close. Considering the garbage on television and in movies, it was very refreshing to see something Biblical on film. If your looking for something for your family to watch this is pretty good. (But you may want to pre-view the part with Adam and Eve first. It’s a little riské, so you might want to skip that part.) My Ratings: [5/4½]

Tim Craft, age 30
I must admit that I typically find it hard to watch most biblical tv movies. It is hard for me to get past the casting of the characters and the biblical inaccuracies. The movie, In the beginning has not helped. I can only give a slight nod that the producers did sparingly use people of color as extras. But come on folks… are we so ethnocentric that we cannot cast olive and dark skin actors to play the roles. I find it hard to get past the blonde hair and blue eyes. Also, why do the movies always skip the judgment that took place after the Hebrews worshiped the golden calf? My Ratings: [3½/2½]

Tony, age 36
I thought that most of the facts were acurate enough for Hollywood, although I felt that the motives behind some of the actions was misrepresented and I was disappointed with what was added and left out. My Ratings: [2½/3½]

Janine Pezzino, age 17
I am rather skeptical whenever the major networks come up with a new mini-series or made for TV movie concerning Jesus or the Bible. Oft-times there are inaccuracies, or Hollywood taking dramatic license and putting in stuff to make the secular audience get their kicks, usually through the romantic themes. In the Beginning started off unlike the previous film “The Bible” released in 1966, with the creation of the universe by GOD, but instead with Abraham and his people. One night Abraham tells them the story of creation. I thought the approach a novel one, and feel it didn’t take anything away from the film for me, with the events seemingly out of sequence. Special effects were good, although I thought some,(though not all) of them were better in The Ten Commandments, starring Charleton Heston. Acting was top notch, and I felt the movie stayed pretty true to scripture and the Bible’s stories and messages. It was entertaining as well as spiritually uplifting for myself, but to know that this was being shown on a major network, which meant the secular world had more chance of watching it, was a bonus… My Ratings: [4½/4½]

Brett and Judith Simpson, age 32
…[did] not include the accounts of Noah’s Ark, Sodom and Gomorrah, or the Tower of Babel, all of which happen to demonstrate the judgment of God against sin and rebellion…