for sexuality and language

“Love and Basketball” is an intelligent and romantic story without the fluff that usually is associated with this genre.

Quincy (Omar Epps) and Monica (Sanaa Lathan) both love the game of basketball. Quincy seems to have an easier road to athletic superstardom because he’s following in the footsteps of his father, who used to play for the Clippers. Monica has to battle against her mother, a traditional homemaker who despairs over her daughter being a tomboy, and a world that won’t allow a woman to be in the NBA. The childhood friends grow up to be lovers, then students at the same college where Monica has received a basketball scholarship. When Monica begins to soar, the couple’s relationship suffers when it becomes a matter of whose career is more important. 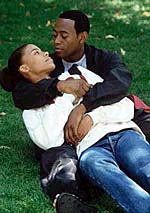 This movie is told from the woman’s point of view, which is refreshing. Monica is constantly picked on because she’s not ladylike, and she has a bad temper on the court. However, she’s smart, independent, and knows what she wants. Monica has to make some hard choices between her love for Quincy and her love of the game. There are many game sequences in the movie, but they stand as metaphors for what Quincy and Monica fight for to get out of life. Quincy looks at the glory and the fame of being a player, but Monica plays for respect. You get the feeling that Monica’s love for basketball is so fierce that she would play for free.

There is one sex scene between Quincy and Monica that leaves no doubt that it’s Monica’s first time. There is profanity, especially from Quincy’s parents, whose marriage is coming apart in the subplot. Both Quincy and his mother (Debbi Morgan of “Eve’s Bayou”) have scenes where they are inebriated.

“Love and Basketball” was one of the best movies yet. [It] tells the story of real life. Girls today who play ball are always called tomboys because they don’t do what the other girls do…

Jennifer Stith, age 17
This movie was a “coming-of-age” romantic drama for those of us, particularly African-Americans, who grew up in the mid to late 1980s. I identified with so many aspects of the movie and am sure that anyone of my peers would echo the same. Not for all audiences… but there are those who will be able to appreciate the memories this movie will bring rushing back. My Ratings: [3½/4]

Anna Hart, age 28
Quality… The actors were great… the soundtrack was great quality R&B, and it was just a great movie! …Morally: Some profanity; the worst moral part of the story was one scene of applied sex, but nothing was shown. Also an “I score and you strip” game of basketball, but again nothing was shown… My Ratings: [3/4]

Skip Sanders, age 14
The movie was good from both the male and female perspective. The movie showed how the couple had great love for the game that they loved and they showed it on the court…

Kwame Richardson, age 20
Movie Critics
…1 use of the “f” word …other profanities …other comments are sexual in nature, while the two leads have sex in a sensuous, but not outrageously explicit encounter in her bed in her parents’ house. Other sex is heard (from parents) and the two leads play a game of strip basketball (although no nudity is seen)…

ScreenIt
…Coarse sexual slang and content mars the film. …boys grope the girls …Several frank discussions about sex …An assumption is made that physical intimacy is normal for dating relationships…

Jonathan Bartha, Focus on the Family, Plugged In
…Epps pulls out a condom, puts it on and the scene implies they have sex. …not for kids…

Holly McClure, Crosswalk
…gets a boost from the recent popularity of women’s sports…

Lisa Schwarzbaum, Entertainment Weekly
…Although Love and Basketball’s story does not pack an emotional wallop, it tells an engaging tale about how the things that seem to be the most important in life aren’t always so. …Although not a slam-dunk, it’s a satisfying lay-up.