for brief mild peril and language 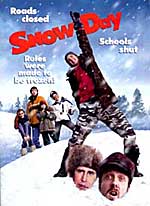 Most of us can personally remember looking forward to snow days while in school. My sons love them and sometimes include a “snow day” in their prayers.

Paramount Picture’s “Snow Day” brings back such memories. While it is not a great film, it is fairly safe in the family genre, and one worth seeing if you are determined to cast your vote for an okay family film.

The setting is Syracuse, New York. The city is hit with an unexpected snowstorm. Life in upstate New York is very busy and this storm has inconvenienced the adult population. “Snow Day” introduces several simultaneous stories. There is Hal Brandston and his romantic dreams toward Claire Bonner, whom he hopes he can win the heart of during this particular snow storm. A favorite part of the story surrounds the goofy local TV weatherman (Chevy Chase), employed by a station desperate for positive ratings. Chevy naturally shines in this role. Let us not forget Natalie Brandston, a woman with a mission to stop the Snowplow Man. (We can all remember the “Snow Days” that almost happened, but were stopped by the efficiency of these tireless workers). And finally, we meet a working mom who rediscovers during the storm what it really means to be a mother.

Some of the negative elements include a child being strapped to the snowplow blade, some violent retellings of Evil Snowplowmen stories, several crude expressions, and various assorted toilet language. There is some disrespect encouraged toward people in authority.

While “Snow Day” is not a perfect film, it is a decent way to spend time with your kids. I recommend the film with the above reservations and a warning that some of the humor comes across as certainly mean-spirited.

I wouldn’t recommend this movie for children under 10, simply because of some disturbing scenes with the “snowplow man”. This really isn’t a “kids” movie as the main plotline is of an teenage boy discovering what true love really is. While a light approach has been taken towards the romantic side of the movie (three brief kisses) the humor etc. would be much more appreciated by an older teen. My Ratings: [3½/3½]

Chenelle Falconer, age 17
This movie is a disgrace. It makes fun of authority, adults and various other important traditional values. The thing that bothers me is that you rated the moral value of this movie only slightly lower than you rated “My Dog Skip” which is a delightful, touching and humorous movie. My Ratings: [1½/2]

John Raycraft, age 54
much disrespect… Although seemingly “harmless” as far as movies go, there is MUCH to be concerned with here. “Snow Day” encourages every unhealthy form of rebellion you can name, with blatant disrespect for any form of authority. I think the most deceptive trick employed in this movie is using cute kids and zany music to mask the constant flow of disrespect for parents, teachers (especially principals!) public property, etc. I have a seven-year-old daughter, and I had to sit down with her after the movie and explain that if kids REALLY did what was done in that movie, they would be considered “bad kids” and some of the things they did would have landed them in juvenile detention of some sort. It’s probably fine for older kids, but I do see bad lessons being taught in this film, and thought you should have the right to know this side as well.

Mike Koger, age 39
“clean, funny, and creative”… My wife and I plus my two boys loved it. We miss the old Nick. show “Pete and Pete.” This movie is made just like a “Pete and Pete” episode, and includes some of the actors from the series. It’s clean, funny, entertaining, most of all creative. I heard the word sexy once or twice. And the love interest had shots of her with no bra; only a shirt. That’s the only problem I had with it. In a day where “Toy Story II” has adult jokes mixed in with the lines this movie is a breath of fresh air. We laughed without feeling guity about it later. It reminds me of what its like to be a kid. And has a great ending! My Ratings: [3½/5]

Clark Julian, age 43
“a fun movie”… It was a real fun movie that stressed that anything can happen on a snow day… It shows the joy of being able to enjoy a day out of school to have fun in the snow. My favorite storyline was the boy and the girl who were best friends. “True love is finding someone you can stand to be around for 10 minutes.”—so true: it’s not about how pretty or handsome someone is… this movie pointed that out. My Ratings: [3½/3½]

Stephanie, age 18
enjoyable… Much better than the other Nickelodeon movies. No profanity. The only thing a little offensive is one kid in the movie (Wayne) has his pants down at his knees, nothing shown, while running. I enjoyed it very much, and will see it again. Great performances from Chris Elliot and Shculyer Fisk…

Elizabeth Minton, age 13
Movie Critics
…a lightweight, but entertaining… little, if any, of the film is ever outrageously funny… near constantly amusing and certainly cute… one of the rare family films that actually works and is enjoyable for most family members…

Bob Smithouser, Plugged In, Focus on the Family
…'Snow Day' takes a vacation from quality… the whole film seems pretty plastic, as if written by a computer. …plenty of dissing of adults …At least it’s short, but I refuse to believe family films have to be as bland and characterless as this one is…

Jay Carr, The Boston Globe
…Tearing down others, particularly authority figures, is an unfortunate theme…

Preview Family Movie and TV Review
…'Snow Day' isn’t peak family fare, but it is a zippy, irreverent time-filler for preteens weaned on the offbeat humor of Nick shows…