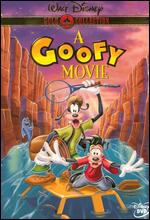 Based on a Disney TV show, this film follows Goofy and his son Max as they bridge the generation gap and learn to understand and appreciate each other. Except for the cat Black Pete and his son P.J. (and a Sasquatch), all the film’s characters appear to be humanized dogs.

Max is a shy, backward type in high school, partly because he fears growing up to be like his father (tagline: “It’s hard to be cool when your dad is Goofy”). He already has some of Goofy’s mannerisms and his trademark “hyuk” laugh, which he tries to suppress. Just when Max finally manages to ask Roxanne on a date, Goofy ruins things by whisking him away on an extended father-son vacation. The “and you thought YOUR parents were weird” storyline, generally a sure-fire gag, is played here to maximum effect.

There’s some comic-style violence, as we’d expect in a Goofy film. Also a humorous yet serious look at parent-child relationships, discipline techniques, and the consequences of lying. The rock music is annoying (and correctly shown as having the power to influence behavior), but is not a major factor.

In the old days, the Mickey Mouse group of Disney characters were never shown as mothers and fathers, only as uncles and aunts. There are still no fully-intact nuclear families visible here (Goofy and Black Pete are obviously single dads, and we see Roxanne’s dad but not her mom if she has one); but the change in Disney policy that allows these characters to be fathers, coupled with changes in the average real-life family, make for a story that a lot of people can relate to. Overall, it’s a worthwhile film.

Although “A Goofy Movie” is no Disney classic, it’s better than I thought it would be. My mom borrowed it from to library once and my little brother watched it over and over! The original reviewer commented on Max and P.J. not having mothers. Actually, on the TV show, “Goof Troop,” Pete had a wife and a younger daughter. I don’t know why they weren’t in the movie. Anyway, lots of characters from Disney movies have one parent (“Beauty and the Beast,” “The Little Mermaid,” “The Aristocats”). It’s just a Disney thing, I guess. I agree that the songs do get annoying.
My Ratings: [Good / 3]