for some violence, sexuality and language. 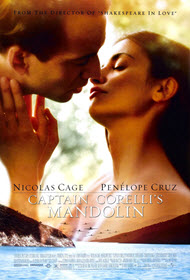 The previews for “Captain Corelli’s Mandolin” make is appear quite attractive. History enriched with a great love story. But it, unfortunately, does not succeed in all that… it doesn’t even make you feel uplifted like “Pearl Harbor,” at least, succeeded in doing.

The story takes place on the Greek Island of Cephallonia during World War II. The island suddenly becomes occupied by Italian soldiers, one of which is Mandolin player Captain Corelli (Nicolas Cage). Arranged to sleep in the doctor’s (John Hurt) house, the Captain meets the striking Pelagia (Penélope Cruz) who is engaged to Mandras (Christian Bale). The latter goes to war, and Corelli continues to live in the house, a mutual attraction beginning to grow between the two.

It is annoying that the movie starts and ends where Pelagia’s father quotes the “gods.” The movie opens with the power of God to heal criticized on a feast common to Greeks. When a sick man seems to be healed, it’s a totally “psychological phenomenon,” the father says. Others say, “it’s a setup”. Why is it so hard for them to see that Jesus is the healer of all wounds? (At least in the end of the film, when Corelli returns, it’s left open to believe that his return is a miracle.)

Pelagia is portrayed as a woman of strong character. But soon we find out that she is too emotional in her acts. She loses her feelings for Mandras while waiting for his return and quickly falls in love with Corelli. Corelli is a happy Italian guy who cares nothing about the war, lives in fornication, and manages to conduct an opera in the mean time. What a character!

Scenes of partial nudity are shown (with prostitutes on the beach). When Pelagia comments on this, Corelli acts offended. Her father seems to understand all that is going on in his daughter’s life, but never warns her about immorality. Eventually the two fall victim to the sexual tension between them. Pelagia still keeps her engagement ring with her, even as she falls out of love with her fiancee. When Mandras asks for it, she lies and tells him that the ring was too loose on her finger, so she put it away for safe-keeping.

“Captain Corelli’s Mandolin” concludes by criticizing the church—“No miracles today?” But to dig up some positive elements, we do see a change in Capt. Corelli who begins to distance himself from his irresponsible behavior. One of his friends risks his life for him and is killed when the Germans shoot at them. Mandras also surprisingly saves Corelli’s life, but admits later that he did it so that Pelagia would love him again. And Corelli does return for Pelagia after quite some time (years), though Pelagia did not wish to wait for Mandras.

The bottom-line: What started between Corelli and Pelagia is pure emotion, not true love. It may have ended well in the film, but in real life a relationship based on lust usually does not fare so well. Pelagia ignores her commitment to her fiancee. True love is far more pure than that. (See 1 Corinthians 13).

From the movie’s beginning to ending, it is clear that Pelagia and her father never change their attitude towards God. As Christians, we must look for a message in such films, not merely be entertained by film. The world pushes their godless agenda of immorality and false gods. “Captain Corelli’s Mandolin” contains no redeeming worldview for the Christian.

Positive
Positive—One notable historical point: the reason Corelli and his men are goof-offs and don’t really care whether the Axis wins or loses the war is because they aren’t Nazis at heart. Many Italians in WWII had a strong devotion to their country, but only a lukewarm one to the Fascist government that had taken possession of it. The Germans, knowing this, eventually turned on the Italian troops, as shown in the film.
My Ratings: [Very Offensive / 4]

Brett Willis, age 51
Positive—The profanity in the movie is not in your face. The f-word is used a couple of times by defiant town fathers who refuse to bow to the Italian demands. Unfortunately, the producers felt a beach scene of the soldiers on holiday needed a few prostitutes and a few moments of topless nudity breaks into a beautiful film. The film does portray the importance of doing the right thing under pressure and that making the right decision does not mean that all things work out well. Good does not equate to “easy.” It is a great lesson.

This is not a film for children under age 14. The war violence is intense and the sexual themes that underlie the film’s premise are not suitable for children. Christian adults will find it an enjoyable evening with a great story that is ultimately uplifting.
My Ratings: [Average / 3]

Jerry Scott, age 46
Negative
Negative—I loved the idea of this movie… the romanticism, the characters, the scenery… but would not recommend it to anyone because of the use of the F-word and the topless scenes. These scenes could have been left out entirely and not only would that have been fine, it would have made the movie BETTER!
My Ratings: [Very Offensive / 4]

Dawn, age 38
Comments from young people
…a pretty interesting story. …did not at all need the nudity… there were a few obscenities but I thought they were portrayed very humorously…

Barbara Ellen, The Times of London
…works superbly… confidently directed… and photographed in sun-drenched Mediterranean locations that leave you gasping…