for language and some sexuality. 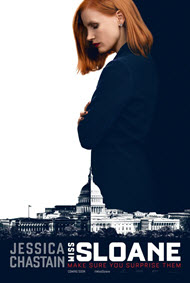 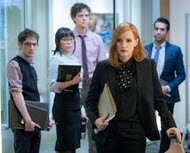 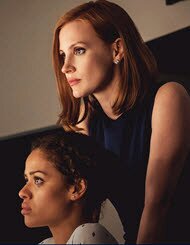 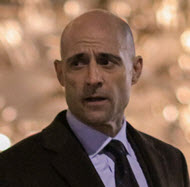 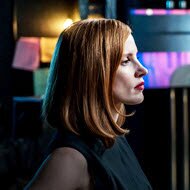 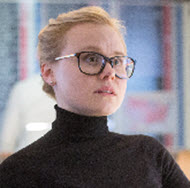 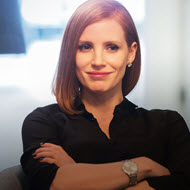 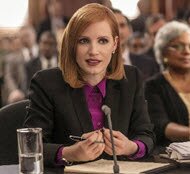 arrogance and pride versus humility

Doing anything to win—Do the ends do truly justify any means?

“Make sure you surprise them”

Washington, D.C. can’t seem to shake its reputation for immoral, unethical, scheming, double-dealing, back stabbing, winner take all, no-holds barred mentality, behavior and philosophy. Miss Sloane, single-handedly embodies each of these, in spades, and appears eager to reinforce that impression. Jessica Chastain’s (she of “The Help,” “Zero Dark Thirty,” “Interstellar,” “A Most Violent Year” and “The Martian”) portrayal of the title character is a study in what a life focused solely on self is like in the extreme.

As perhaps the most powerful lobbyist in D.C., Chastain’s Elizabeth Sloane is the woman every man wants to be: powerful, respected, rich, intelligent and feared. Inside the old-boy network that cuts deals in high-priced restaurants, tech-heavy and whitewashed conference rooms and floor-to-ceiling glassed corner offices, the cast of “Miss Sloane” follows a plot line that ostensibly seeks to pass (or kill) gun-control legislation that becomes as much a pawn to the individual egos and competing ideologies of the film’s rival factions as the viewers are to the producers pandering to a secular social agenda.

In short order, Elizabeth quits the uber-connected lobbying firm that has helped her achieve the success which allows her to bask in the glow of her reputation for cunning and ruthlessness to join a minor league group whose David vs. Goliath mantel is undercut by its relatively principled leader’s (Rodolfo Schmidt played by Mark Strong) hiring of Sloane, precisely because of her notoriety.

To watch Elizabeth’s life played out in one-liner sound bites, relationship-free sexual liaisons, acquaintances and colleagues kept at arms-length, addiction-level pill popping and mind-bending plot twists, is to view the inevitable unraveling of modern-day capitulation to the idea that the ends do truly justify the means, if you claim that it was your right, duty, feeling or belief that underpinned the action. With the exception of some self-effacing insight into what makes Elizabeth tick, garnered through a drunken scene with a male escort in a swanky hotel room (casual sex dressed seductively in affluence) and the self-revelatory asides during testimony in the hearing room of a Senate committee designed, perhaps, to knock Miss Sloane off her square, we are left to judge her in the vacuum of a morally bankrupt environment that values her attributes (even if it pretends to abhor them).

The counterweight to Sloane’s Machiavellian machinations is her doe-eyed and mild-mannered assistant, Esme Manucharian, well-acted by Gugu Mbatha-Raw, who is simultaneously beguiled and bedeviled by Elizabeth, while holding onto a secret of her own that ushers in the movie’s only violent scene. Unfortunately, the heavy-handed approach of the director and script writer to influence public opinion on such a current and relevant issue as gun control takes away from what could have been, were the free flow of dialogue less stilted and the contrasts less stark—even to the point of caricaturing Elizabeth’s perfection in clothes, hair, skin, make up and seemingly Professor X-ish (or Jean Grey) ability to guess what the other side will do before they do it.

The paradox of a film like “Miss Sloane” lies in the parallel to Christ’s parables throughout the Gospels. Early on, Sloane tells a joke to her underlings that includes a reference to Luke 14:10. But it’s the insight provided in verse 11 that offers the antithesis of the movie’s moral compass:

The story purports to be a tale of power, alternately deranged, disrupted, derailed and demonized under the umbrella of an heroic and herculean attempt to do what is “right” when faced with overwhelming and seemingly insurmountable odds. The Jews were in just that same position in Exodus as their backs were to an impassible sea and an implacable army, depending on which way they looked. Whether drowning in the deep end of the self-inflicted wounds of poor choices or suffering the imponderable questions of why allegedly bad things happen to supposedly good people, the answers can all be found by looking up.

“Miss Sloane” is good entertainment, if you are shopping for a way to feel like you’re better than someone else just because you don’t act (ever) as outrageously obnoxious (well, maybe sometimes) as the person in the seat next to you. Separating the wheat from the chaff of this Hollywood moralizing will be a requirement.

Neutral
Neutral—I agree with your review of this movie. I went to see the movie because I know what a talented actress Jessica Chastain is. Her performance is indeed spectacular. I am also familiar with the wheeling and dealing of lobby groups, since I lived on Capitol Hill for a while and was able to visit the House and Senate. I walked from office to office and saw the amount of negotiating going on.

This movie is for those who are interested in seeing a stellar performance, which Chastain’s is, and also maybe learning about the ugly side of lobby groups and government behavior. The script is quite clear on how political deals are made. Your reviewer duly noted the amoral sexual habits of the main character, and that could make some people quite uneasy.
My Ratings: Moral rating: Very Offensive / Moviemaking quality: 4

Todd McCarthy, The Hollywood Reporter
…an entertaining, crowd-pleasing, and angry thriller that has much more on its mind than (rousingly delivered) procedural pageantry…

Stephen Whitty, New York Daily News
…The “Zero Dark Thirty” star prevents a sometimes ludicrous script from veering off course with her forceful performance in the role of a Washington lobbyist. …

Nigel M. Smith, The Guardian (UK)
…a shallow but lively thriller which becomes undermined by its makers’ misplaced belief in the profundity of their topical tale. …By the time Chastain delivers an on-the-nose speech about how rotten Washington politics are, Miss Sloane has revealed itself to want it both ways…