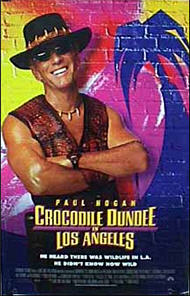 Here’s what the distributor says about their film: Mick “Crocodile” Dundee, his partner, Sue, and their young son, Mikey, have traveled far away from their tiny Australian town of Walkabout. Sue has been temporarily assigned to head the Los Angeles bureau of her father’s newspaper after the original bureau chief died under suspicious circumstances. Mick, who wants to expose Mikey to the world outside Walkabout, decides that he and Mikey should accompany Sue and the whole family travels to exotic California together. When Mick accidentally gets caught up in Sue’s investigation, the stage is set for an extended series of jibes that poke fun at the Southern California lifestyle from an outsider’s point of view.

…great comical fun that is even better than its two predecessors in the “Dundee” series. Certain scenes, however, still warrant parental guidance. There are two references to homosexuality (one is merely implied), and enough bad language that I would suggest keeping anybody younger than 10 home from this one.
My Ratings: [Average / 4½]

Eric Schmidt
I was quite disappointed in this movie. The movie had a lot a bad langauge. There were also sexual references that weren’t appropriate for a PG rated movie. The story line was weak. The actual action was not strong. I would not spend my money to go see it again, or any other Crocodile Dundee movies.
My Ratings: [Average / 2½]

Rachel, age 14
This was a very good movie. I am shocked to see that many people were debating about the film’s VERY MILD content. Can’t we just appreciate this movie for being a family friendly PG rated film instead of bashing it because of its flaws? There was hardly anything objectionable in this film, save for a few curse words that were anything but extreme. Atleast they weren’t spewing out blasphemies and F-words! Go see this movie. It is very funny, and a good time to spend at the movies!
My Ratings: [Better than Average / 5]

Adam, age 18
It was kinda cheesy. As the other responses have said, there was some objectional language and the little boy and his dad commenting on the lady’s bottom. But simply as a movie, it didn’t have much of a plot and there was at least one pointless line (I was going to tell you to be careful, but…). It was okay, but better to wait until it comes out on TV than spend 8 bucks to go see it.
My Ratings: [Better than Average / 2]

Julie, age 14
This movie seemed to be safe by your reviews, but my husband and I found it to be offensive and uncomfortable. There were Hollywood bodies everywhere. I rarely see anything warning of sensuality anymore…
My Ratings: [Very Offensive / 2]

Marilyn Redfield, age 46
Mike Tyson instructs two of the characters on yoga which gets pretty in depth. There was also a bunch of cleavage and showy clothing. When a man does not respond to a woman’s flirting she assumes he is gay and when asked the innocent character replies that he is happy. Two males comment on a passing woman’s posterior. A lot of stuff like that goes on. Commenting on women’s behinds. Some men also briefly visit a gay bar mistaking it for a cowboy hangout. There was a lot of fighting but nothing too violent, mostly fist fights and such. There were also a couple of cuss words. There was also a lot of alcoholic drinking and men who drank sodas were called weenies.
My Ratings: [Very Offensive / 2]

K.E., age Teen
The PG rating is very misleading—the rating should be PG-13 due to language alone. Also it is made very clear in more than conversation that the parents are not married. Although, I must clarify that at the end of the movie, they do marry. There are several scenes where alcohol is served and there is a short take on Mick and his friend unknowingly going into a gay bar. One scene has a gang in a car stopping Mick and his friend on the street in an armed robbery attempt. The language the gang used was offensive. There are also several innuendos thrown in throughout the movie. My 11-year old son found the language to be offensive also. The movie does have several comic points and Crocodile Dundee does show he cares greatly for his son. As I said, at the end of the movie he and his girlfriend do marry. Even if the movie did not have the innuendos and the offensive language throughout, it would still be only an average movie due to the lack of a great script.
My Ratings: [Average / 3½]

Sharon H, age 46
Movie Critics
…Dundee actually feels like a breath of fresh air in a time when movie comedies are awash in bodily fluids…