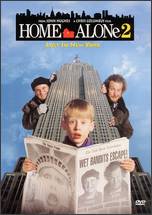 In the world of sequels (often made because it’s better to settle for a locked-in audience and a projected 60% of the original’s gross than to try something new and risky), this film has to be one of the most shamelessly formulaic offerings ever. And its take actually was 60% of the original, which was good enough to place it (temporarily) among the 20 highest grossing films of all time.

Kevin McCallister (Macaulay Culkin), now age 10, is back. So are his whole family and his aunt, uncle and cousins. So is Kevin’s conflict with brother Buzz (Devin Ratray), which gets him on the outs with everyone. So is a “mistake” during a Christmas vacation trip, which again leaves Kevin separated from his family. And so are Harry and Marv (Joe Pesci and Daniel Stern), newly escaped from prison and again up to no good. Kevin scares people with audio clips from “Angels with Even Filthier Souls,” a sequel to the imaginary gangster film which was used for the same purpose in the original. The Shovel Man is not reprised, but his place is taken by the Pigeon Lady (Brenda Fricker).

The “plot” must be built with the restriction of using all of these preset elements; so the film is basically escapist comedy, which we watch just to find out how they’ll tell the same story over again and to see the bad guys get theirs.

Content warnings: Moderate profanity and family fighting. The comic-book violence, as Kevin again foils the crooks’ plans, is two or three times as murderous as in the original (but like Wile E. Coyote, the crooks just keep bouncing back). While in the crooks’ custody on a crowded sidewalk, Kevin pinches a woman’s behind (so she’ll turn around and punch out the crooks, allowing Kevin to escape). And the movie audio clips, which in their original setting were a gangster accusing his girlfriend of being unfaithful, are used by Kevin in a way that accuses a sneaky chief bellboy (Tim Curry) of being homosexual.

The most positive content is when Kevin “connects” cross-generationally with the Pigeon Lady (as he did with the Shovel Man) and each helps the other to see things more clearly.

Overall, this is a silly film at best, and shouldn’t be seen by children too young to realize that it’s a fantasy. With the extra topics that are thrown in, the lower age limit should probably be raised a year or two from that of the original.

I watched this movie about a year ago and enjoyed the whole thing. It makes for a great comedy, and I think it worked wonderfully as a sequel: it brings back the main characters and the plot situation, but the stakes are raised and more of the thieves’ antics and more of the kid’s ploys add more fun to the film! I was laughing out loud as I watched the now-Sticky Bandits take multiple hits to the head and falls down long drops. But parents should be warned about these stunts, which are usually more painful than the first Home Alone’s were; not all little kids should keep watching just yet. I had also watched this movie just after it was released, and even though I was just slightly younger than Culkin, I remember being horrified when Marv was hit on the head over and over by bricks thrown from three stories above him. Now, I think it’s hilarious, but parents with more serious kids should be careful with the extra violence in this movie.
My Ratings: [Better than Average / 3½]