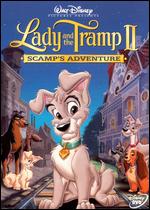 After 46 years, one of Disney’s great animated films finally has a sequel. And the high production values, excellent characterizations and “good taste” make it a fitting one.

Tramp is settled down with Lady in the home of “Jim Dear” and “Darling,” and they have four puppies—three girls who take after their mother, and a boy who’s the image of his father. Scamp seems to have inherited something else from his father as well—he dislikes family life with all its “rules and regulations,” and longs for the “free” life of a street dog.

Leaving home in his quest for happiness, he finds that life on the outside isn’t all he thought it would be. He meets and falls for the sweet-hearted Angel, but gets into trouble having to prove that he’s “worthy” to join a gang of tough junkyard dogs led by his father’s former pal, Buster.

Although Scamp first appears at the very end of the original “Lady and the Tramp”, the development of his slightly-mischievous character is not new. Back around 1960, he even had his own comic book series.

There’s some non-scary violence—between the dogs, and as the dogs repeatedly escape from the ever-present but bumbling dogcatcher (in addition to the voices of Tramp, Jock and Trusty, Jeff Bennett does an excellent Don Knotts imitation as the voice of the dogcatcher).

The story is positive and the content is clean. The major theme is the importance of family. Angel, who already knows what street life is like, would give anything to have what Scamp has run away from. We could even say that the film is a retelling of the story of the Prodigal Son (Luke 15:11-32). Definitely worth watching for all ages.

All in all, Lady and the Tramp seems to be an inoffensive, even fun piece about simple love in the animal kingdom. Yet, one must consider the rather disturbing theological implications such a piece holds. First, the movie only reinforces the materialistic concept about “love at first sight” and similarly shallow views towards existence. As if humanity should base its principles of pure love on appearances. More offensively, the movie portrays “talking animals”, a concept reserved in the instance of Balaam’s donkey. In this case, the donkey was under direct inspiration from God, something we most definitely should NOT assume with “Lady and the Tramp.” I see this movie as propaganda from the animal activist groups who wish to anthropomorphize animals to the level where we believe they have a soul. This is clearly not the case Biblically. “Lady and the Tramp” is indeed non-violent, even cute. But just as “Highlander” is offensive due to theological inaccuracies, so this movie must be taken in a similar light. Cheers.

Nicholas Calamari, age 21
This is the best piece of Disney bunkis fruit that I have ever seen in my entire life! Bunkis fruit is just a word I made up to describe “cute”. But, yeah, this movie was so cute, and it had great moral values that every Christian household should cherish! Sit back, relax, rent this movie, and enjoy the bunkis!
My Ratings: [Excellent! / 5]

S.E., age 14
This was a very cute movie. They recreated the original scenery very well. The new characters were likeable. Both of my kids really enjoyed this movie. it’s a good family movie.
My Ratings: [Excellent! / 4]