Last of the Dogmen

for adventure violence and mild language 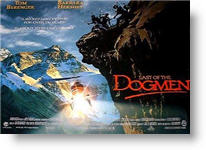 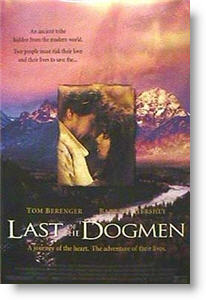 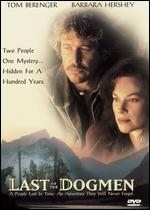 This film’s premise is a band of American Indians—Cheyenne, specifically—cut off from the outside world and still living according to their ancestral customs in the wilderness of present-day Montana. Although that’s farfetched, it works because it taps into something that many of us would like to believe. If you’re interested in a story with the emotional tone of “Dances With Wolves” and a modern setting, this is the one.

When some convicts overpower their guards, crash a prison bus and escape into the Oxbow wilderness, Sheriff Deegan (Kurtwood Smith, in his usual bureaucratic role) reluctantly calls for his alienated former son-in-law Lewis Gates (Tom Berenger) to track them down. But before Gates can catch them, the convicts are killed by someone else. There are no bodies. Besides the blood, the only clue is a broken Cheyenne arrow. Gates goes to an Indian anthropologist, Prof. Lillian Sloan (Barbara Hershey), for help, and learns that a band of Cheyenne “Dog Soldiers” and their families had vanished into that area 128 years ago. Researching the local paper’s archives, Gates finds more clues; and eventually he and Sloan trek into the wilderness looking for answers. The story is well-structured and fast-paced, and it doesn’t seem annoying that it takes an hour of screen time before we get our first clear look at the title characters.

There are no strong sexual profanities, but some occurrences of other kinds of bad language. Several on-screen or implied deaths (including some in a dream sequence). Some reviews characterize the story as supernatural, but that’s an overstatement. The Cheyenne explain that a talking wolf advised their ancestors to retreat into the wilderness forever; later, as a wolf howls, the sleeping Gates realizes that he can never let the outside world know what he’s found. The structure is such that the viewer can take those story points either as supernatural, or as legend and coincidence.

Everyone turns in strong performances: Berenger, in the “cowboy born a century too late” image that he first showed in “Shoot to Kill;” Hershey; Smith; Eugene Blackbear as Chief Spotted Elk; and Steve Reevis as Dogmen leader Yellow Wolf. The outdoor cinematography is excellent, and the editing and the mood-setting music are superb. There are romantic and family-conflict subplots which are handled well and don’t detract from the primary storyline. As we might expect, the film generates some degree of “white guilt” about American history. The production values are higher than in many so-called blockbusters. I recommend this film.

Positive
Positive—“Last of the Dogmen” is a movie I have watched many times. I bought it for my own movie library after the first time I saw it. The only thing I find fault with is the use of the Lord’s name, and some minor swearing. Aside from that, it is a wonderful movie. Beautiful scenery and music.

The fact that I’m part American Indian is one of the reasons it speaks to me like it does. A person can always wish something like this could really be true. I’m not sure I would let younger children watch it. It has some scary parts, in my opinion, for small children. There is some violence, but it does have many good qualities. It does speak to good moral values.
My Ratings: Better than Average / 5