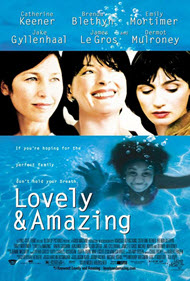 “If you’re hoping for the perfect family, don’t hold your breath.”

Many small films deal with large subjects. “Lovely and Amazing” deals with a momentous one: the subtle emotional wounds that people and families deal with daily. The great American philosopher, Emerson, once wrote, “The majority of humans lead lives of quiet desperation.” Such quiet pain will most likely not create “exciting” art. But for those willing to allow themselves to be touched, these gentle stories can be both healing and profoundly moving.

When the film begins, the matriarch (Brenda Blethyn) of a family of daughters is preparing to enter the hospital for lipo-suction. Her older daughter, a former homecoming queen, is attempting to make a living as a freelance artist. But her husband is not supportive. Her second daughter, Elizabeth, is an actress with insecurities and a boyfriend who is impatient with her self-esteem issues. The youngest daughter is an adopted black pre-adolescent who eats to hide her pain and knows only that her biological mother was a crack addict. What these women have in common is the lack of a supportive male figure. There is no man around who wants to affirm them. The men drop out of the women’s lives, either emotionally or physically. They are either unable or unwilling to support the women in their lives. The women end up being overly fixated on being “perfect enough.”

The film’s plot is subtle. But as it continues, the women face situations that slowly move them beyond their inner torment. Men figure in this plot simply because they do not figure. In one scene, the audience realizes that not only has the youngest daughter picked up the family self-esteem neurosis, but because she has been told all the time that her mother was a crack addict, her idea of her future is tainted.

Because it deals with the subtlety of woundedness, “Lovely and Amazing” probably falls into the category of a woman’s film. But wounded men are out there too. Unlike religions that are based on a distant or untouched God, Christianity is a religion based in love. Many of our songs speak of God’s love for us. “I am so glad that Jesus loves me,” etc. It also is a religion that affirms its believers: God gives spiritual gifts to everyone and everyone has a work to do. In addition, we have a saviour and Lord who is called “A Man of Sorrows who is acquainted with grief.”

Many Christians might think that this film about self-esteem, love, and the aftereffect of divorce, is not good entertainment. It speaks about the grief and pain that comes from being unloved, unpraised, and unaffirmed. And it leaves the viewer with a sense of healing. Few films do that. And so I find this sweet film highly entertaining. There is one nude scene which some Christians may object to. But I believe the scene was needed and—painful as it was—important to the plot. Other Christians might find the four letter words objectionable. But in spite of these objections, this is one of the best films about family values that I have seen in years.