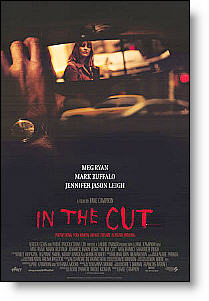 Here’s what the distributor says about their film: Following the brutal murder of a young woman in her neighborhood, a self-determined NYU professor dares to test the limits of her own safety by propelling herself into an impossibly risky sexual liaison with a detective. As the affair increasingly pushes the limits of sexuality, she grows wary about the motives of every male with whom she has contact—including the detective.

Positive
Positive—One of the things I believe art is for is to allow us to understand our darker nature so we can avoid it. It is on this level that “In The Cut” works. I am a non-Christian, an ardent secularist, so I am not sure how much of what went on in the interpersonal relations of the characters are familiar to a devout Christian. I found the sense of longing and searching in this film familiar—not healthy but familiar.

The story is over the top but the essential relationships (minus the crime story) is instructive about the dangers of allowing appetites to overtake judgment.
My Ratings: [Extremely Offensive/4]

Jamie [non-Christian], age 44
Negative
Negative—This was a horrible movie. There was very foul language and complete nudity (both male and female). I wanted to see who the killer was in the movie, but had to fast-forward past so many parts because it was so offensive. Sex is made out as sleazy and disgusting, not at all what God intended it to be. If you rent this movie, keep your remote at hand. This should have had at least an NC-17 rating.
My Ratings: [Extremely Offensive/1]

Chele Brannen, age 35
Negative—This film is filled with raw nudity, graphic language, violence and bloody. Meg Ryan portrayed herself as very sleazy with little interpersonal skills as an English teacher. The meeting of Meg’s father and mother trivializes the commitment and thought to marriage and makes it romantic to have instant attraction and lust. This mindset is played out in Meg and her sister’s encounters with men in their lives. There is no moral value to the movie. Christians beware.
My Ratings: [Extremely Offensive/2]

Jeremiah Kipp, Slant Magazine
…derivative, idiotic thriller that is devoid of any suspense, logic or intelligence…

Jack Matthews, New York Daily News
…Meg slums, and result is glum… The point being laboriously made—that all men are monsters, though some in a way that really turns girls on—is elementary feminist at its most banal…