for adventure violence and some crude dialogue 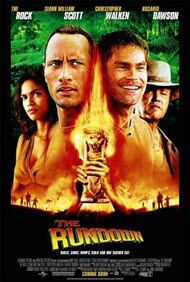 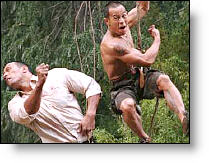 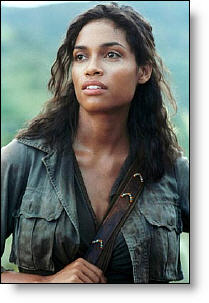 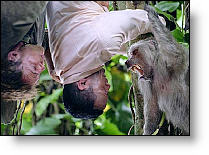 The Rock shows off his pro wrestling moves and more in this silly comedy-action flick, which has been described as “Indiana Jones” meets “Midnight Run”.

A throwaway opening sequence characterizes the “retrieval” skills of Mr. Beck (Rock), a bounty hunter: He collects on a debt from a pro QB who has his entire offensive line for bodyguards, and takes the QB’s Super Bowl ring as collateral for the balance. Of course, the QB doesn’t cooperate, so it all has to be done the Hard Way. There’s a two-second cameo by Arnold Schwarzenegger in this sequence.

Then, the main story. Beck is sent to bring his crooked employer’s son Travis (Seann William Scott) back from a fortune-hunting venture in Brazil, so that Travis can face the music for having ticked off the wrong people. True to form, Travis doesn’t cooperate either. AND the slave-driving mine owner Hatcher (Christopher Walken) doesn’t want Travis leaving the jungle until he leads Hatcher’s men to an archaeological treasure: A solid gold cat. So it’s a four-cornered fight between Beck, Travis, Hatcher, and the “rebels” who want Hatcher to pay the mineworkers decent wages. Convoluted, but not complicated.

The characters aren’t well-developed. Dwayne “The Rock” Johnson is a competent actor, but this role wasn’t intended to test his dramatic abilities. Walken’s character was a boring cardboard cutout. Scott had a little touch of young Tom Cruise in his performance as the wayward, smart-aleck son; but the most interesting character for me was Mariana (Rosario Dawson). Despite the possibilities for social awareness in the plot, the story functions basically as a flimsy excuse for tongue-in-cheek action violence.

The cinematography includes vistas of “Brazil” (actually Hawaii), digitally enhanced fight sequences in the style of “The Matrix”, and some hilarious visual effects (distorted faces) seen from the point of view of people who’ve been tricked into eating a fruit with mind-numbing effects.

There’s extreme, but mostly bloodless violence throughout the film, with many people killed. Primarily hand-to-hand combat and use of any object at hand as a makeshift club. But there’s also use of rifles, handguns, automatic weapons, knives, whips and hatchets. Beck tries to do his bounty work without using guns, but near the end of the film he’s put into an extreme situation that tests his resolve on that point.

The language is relatively clean for a PG-13. There are about 40 to 50 occurrences of profanity, cursing, bathroom slang and sexual slang.

There’s no direct on-screen sexual content, not even any kissing or hugging. Unless you count the monkey that grabs onto Beck while Beck is hanging upside down by an ankle snare. (By the way, they used baboons in the film, which is a black mark on production values for authenticity. Baboons and all other Old World monkeys have non-prehensile tails and differently-shaped noses than New World monkeys.)

There are references to Travis being in trouble because he slept with a married woman. Mariana and some other women show cleavage. There’s a long joke sequence about Travis needing help urinating because his hands are cuffed behind his back: Beck reluctantly unzips him, but refuses to help further, so Travis has to be creative. Another joke sequence involves a river parasite that can supposedly follow a urine stream to its source and thereby gain entrance to a person’s body.

Hatcher would be a truly despicable character if he were played more realistically. As it is, he’s laughable. Almost every major character in this film is flawed or tainted in some way. The possible exception is Mariana, who’s more than we at first assume her to be.

If there’s a moral in the story, it’s that actions have consequences. Beck is in debt to Travis’ father Billy, due to some unspecified past indiscretion. Since he’s muscular and has fighting skills, Billy uses him to collect debts from other people. But Beck really wants to get out of the bounty hunter business, and open a restaurant. So in order to escape his circumstances himself, he has to do Billy’s bidding and show no mercy to his fellow-debtors. This eventually wears on his conscience.

This isn’t my genre of film, and I don’t think it’s a particularly good example of the genre. But for mature viewers who enjoy this type of thing, it’s escapist entertainment.

Comments below:
Positive
Positive—The Rundown is truly a comedy and a adventure movie. It keeps your interest through out the show. It is decently clean movie. I’ll be honest, there was couple of scene they could either done without or do it a little bit differently. But it wasn’t to bad. Overall, a good movie to watch.
My Ratings: [Better than Average / 5]

Shara Pitts, age 21
Comments from young people
Neutral—I saw this movie with two girlfriends of mine, and we all loved it. It’s one film that left me eager for another opportunity to watch it for a second time. However, some inappropriate material would bring me to caution you. There was a good bit of language, and lots of violence (minimal gore), as well as some crass and vulgar scenes/references. However, if you’re looking for a good, laugh-out-loud experience, and can overlook this movie’s typical moral flaws, you’d enjoy this one. I would recommend this movie to a mature viewer who is seeking a well-made action/comedy flick.
My Ratings: [Average/4]

Catherine M, age 15
Positive—I thought this movie was pretty darn cool the Rock makes a big comeback since the Scorpion King which by the way was very stupid. the action was top notch it was really funny and I would recommend it to anyone ten and up.
My Ratings: [Average/4]

Jordan, age 12
Positive—I enjoyed this movie, Seann William Scott seems to have taken acting lessons and Dwayne “The Rock” Johnson isn’t bad either. Christopher Walken is his normal genius, calm, quiet, but with an edge, he plays a perfect villain. …The violence is cartoonish till the end where it gets a little extreme. There are many high action fight scenes but they aren’t that big of a deal. There is some crude sexual humor. I liked this movie but keep in mind that I’m a 16 year old male, and we need our silly action flicks. This isn’t really a family movie…
My Ratings: [Average/3]

Michael, age 16
Positive—This was an awesome movie!!! It combined two of my favorite genres of movies!!! Action and comedy. Dwayne “The Rock” Johnson was awesome with all of the action. Seann Williams Scott delivers amazing comedy. These two together are an undeniably good recipe for non-stop action, and gut-bustin’ humor!!! I have seen this movie twice already, and it just keeps gettin’ better.
My Ratings: [Better than Average / 5]

Sara, age 17
Positive—This movie was a whole lot more than I expected. I had fun watching it. It really made me laugh. There were of course a couple of comments that shouldn’t have been made, but it very well produced. The stunt action was very well done. Recommended to older teenagers.
My Ratings: [Better than Average / 4]

Beth Bankston, age 16
Positive—If you like action-comedy this movie is for you! There was one or two scenes in which the humor was crude . The language was iffy but other than that I really enjoyed as did all my friends who saw it .I will probably go see it again.
My Ratings: [Better than Average / 4]

Kornkven, age 17
Positive—I bought this movie after seeing that it looked pretty funny and didn’t seem to have the loads of objectionable content that most movies these days do. Well, I wasn’t disappointed. Being a guy, some of the jokes were funnier for me than maybe they would be to a girl. Relatively clean and very fun. Recommended.
My Ratings: [Average/3]

David Demeusy, age 15
Neutral—Dwayne “The Rock” Johnson has chosen to be in some pretty funny movies. I thought this movie could have done without a lot of the bad things it had in it. There is a scene that is supposed to be the funniest in the movie and I didn’t laugh at all. What he did (Sean William Scott not Dwayne “The Rock” Johnson) was …I can’t say it, but it was really bad. There was an average amount of language in this movie for a PG-13 at least. There were a lot of instances of bad things. But the overall story was good. I wouldn’t recommend it for kids under 10 years though.
My Ratings: [Average/4]

Alex, age 17
Movie Critics
…If “The Scorpion King” was a mammoth hit despite being a pretty bad movie, “The Rundown,” better in every way, should temporarily propel The Rock through the roof…

Margaret A. McGurk, Cincinnati Enquirer
…You can watch it, enjoy it, have a few good laughs—and never think about it again…

Bob Longino, Atlanta Journal-Constitution
…Those not in the smackdown frame of mind will find an overabundance of head-butts, body slams and pounding aural effects—this is a definite contender for loudest film of the year—but also will discover instances of innovative, spectacular stuntwork and, though the comic interplay often falls flat, a story with heart…

Sheri Linden, The Hollywood Reporter
…in its own good-natured, silly way, it works better than most of the year’s other adventure-gutbusters…

ScreenIt!
…unbelievable action and an indestructible hero. …too much violence and bad language make this one unacceptable…

Preview Family Movie and TV Review
…character relationships are fresh and enjoyable. …keeps the action lively …with an abundance of humor…