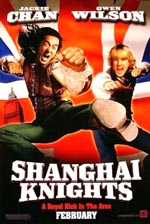 Have you ever wondered how Arthur Conan Doyle came up with the name Sherlock Holmes? How Charlie Chapman came to be a silent film star? What happened to Jack the Ripper? Shanghai Knights clears up these mysteries and more in a hilarious action-packed adventure that takes you from the wintry mountains of China at the height of imperialism to the dusty, uncultured wild west and from there into London at the peak of the Victorian era. While leaning on a few plot twists and references to the first film, this is pretty much a standalone project. You will need some knowledge of Chon Wang and Roy O'Bannon going in, but won’t be totally lost without it. There are so many literary gags, references to upper-class British Victorian morality, and cameo appearances by infamous real-life individuals, it’s almost hard to focus on the real storyline, you’re having so much fun.

One dark, blustery night in the Forbidden City at the heart of China, a cold wind blows in an impending threat. The Keeper of the Imperial Seal is murdered and the precious artifact stolen. Just after the cold-hearted attack by the dark, handsome thief and his legion of Kung-Fu warriors, the old man presses a box into his daughter’s hand and tells her to seek her brother’s aid in recovering the lost seal of China. Several years earlier, when the crown royal was kidnapped and held for Chinese ransom, Lin’s older brother Wang (Jackie Chan) traveled to America in a rescue attempt, where he met up with wisecracking, womanizing Roy O'Bannon (Owen Wilson). After rescuing the princess and gaining the reward, Roy took off to New York to live the high life and Wang took over as the sheriff of a small, seemingly insignificant, unexciting western town.

With Roy’s notoriety growing thanks to the pen of a serial writer who greatly exaggerates his exploits, Wang is feeling somewhat under-appreciated. Lin’s desperate plea for help in recovering the Seal and avenging the death of their father comes at just the right time. With a willing Roy in tow, the two cowboys cross “the pond” and are introduced to British life—complete with pickpockets, royal snobs, and packed city streets (“where they drive on the wrong side of the road!”). Wang could care less about the cultural barrier but Roy is just full of helpful snide comments. (In a hilarious sequence he teases one of the palace guards about everything from the “beaver” on his head to taking on the “little Colonialists” and losing.)

Their quarry is Lord Rathbone (Aidan Gillen), the “best swordsman” in the world and 10th in line for the throne. Recently returned from China, he’s attempting to convince Parliament the country is in desperate need of reform, with his own quiet but de vious takeover plan waiting in the wings.

The film carries a lot of laughs but is fairly weak in the first half. We get the sensation some scenes were planned just so Jackie Chan could show off his karate skills. (Which they were.) It’s only after the second half kicks in we begin to understand why we’re watching the movie in the first place. That’s when the action really takes off and the British gags reach an all time high.

The Scotland Yard inspector who uses methods of deduction to an astonishing degree. (His examination of Roy’s timepiece is almost a direct copy of the first chapter in The Hound of the Baskervilles.) The wisecracking street-smart pickpocket who in the end turns out to be a famous comedian. Roy and Wang undertaking a “disguise” and showing up in a Sherlock Holmes/Dr. Watson silhouette in a frosted windowpane, complete with pipe and deerstalker. Lin tangling with Jack the Ripper in Whitehall. There’s even a crack at Stonehenge (“Who would leave a pile of stones in the middle of a field?”).

Throw in a royal knighting, revolving walls, secret passages, a creepy wax museum, and a climatic duel in Big Ben, and Shanghai Knights delivers the laughs to such a degree you’ll be rolling on the floor. The final third of the film is by far the best; it almost makes you forget some of the poor plot twists in the beginning. The ending battle between Rathbone and Wang is nothing short of astounding. The infamous duel (filled in with a breathtaking musical score in the background) fought amongst the workings of the biggest clock in England involves some fantastic chorography. Aidan Gillen uses two and even three blades in a fast-moving attack—and did all of his own swordplay. There’s also a surprisingly realistic twist thrown in at this point which gives the story credibility.

Like the original, Shanghai Knights suffers from sexual dialogue and implied prostitution. The violence is not that problematic; all of it is bloodless and involves general karate action. The language is mild (one abuse of Jesus’ name by a street urchin; another partially muffled in the outtakes at the end; and a disguised f-word in subtitles, along with general profanity). But the first half of the film is wrought with sexual innuendo and double meaning. Our introduction to Roy has two busty girls dropping their room keys into his lap. He sends Wang to one (the Chinaman adamantly refuses to “sleep with women for money”) and joins the other in her room. When the woman’s father shows up unexpectedly, the two men beat a hasty retreat. Roy later is propositioned by a prostitute and turns her down (but not without saying “Where were you two weeks ago? I would have bedded you in a second!”) because of his affection for Lin.

After a violent quarrel between Wang and Roy, the former makes up by arranging for twelve prostitutes to be in Ron’s room when he returns. The pillow fight which occurs in this scene winds up with the two men stark naked. (They cover their midsection with pillows when Lin walks in; we don’t see any direct nudity.) When discovering a copy of Kama Sutra in Rathbone’s library, Ron eagerly pockets it—and berates the Englishman later for having such a “disgusting” book. He dreams of waking up in a harem of beautiful women. Lin is among them and licks his face, holding up the book. He then wakes up to find a sheep licking him. More problematic are the jokes on anatomy size and sterility. (The latter uses some offensive terminology.) When experiencing British cuisine for the first time, Roy is offered something called “spotted d*ck.” A secret panel is activated in Rathbone’s library by pressing a nude statue’s breast.

There are also some funny anti-British comments that might offend those on the losing side of the American Revolution; but everything is so tongue in cheek (the movie mocks Americans just as much as the British) I doubt very many viewers will be offended. Despite its flaws (of which there are an unfortunate number), how could you not like a film that makes fun of British Victorian life? That introduces you to the idea behind Sherlock Holmes, famous authors and comedians (even a Dickens character has momentary fame on a sign outside a morgue!), and has a truly rock-solid climax involving everything from a machine gun to double-edged swords? The acting is solid and the plot clever.

The PG-13 rating is never taken advantage of and for older viewers looking for some high-action fun, “Shanghai Knights” is just the dickens.

Reprinted with permission of charitysplace.com

Comments from young people
Positive—I went to “Shanghai Knights” not knowing what to expect because I’d really never seen a Jackie Chan movie before. It was very funny. Owen Wilson made me laugh all through the movie. There are a few objectional things (sexual), not a lot of language that I can remember. And the fighting scenes were so over-the-top unrealistic (and not bloody) that watching them was a treat!! I would watch it again when it comes out on video.
My Ratings: [Average / 3]

Kaley, age 16
Movie Critics
…The best thing about “Shanghai Knights” is that it doesn’t take itself too seriously. There is nothing deep or meaningful about this film. It is just meant to provide an evening’s diversion and playful entertainment. And it succeeds.

Michael Elliot, Movie Parables
…These two have hit a winning formula and should keep on making these hilarious movies together. …I laughed all the way through it.

Holly McClure, Crosswalk
…For sheer entertainment value, “Shanghai Knights” actually improves on the original, yet succumbs to many of the same problems that shanghaied its predecessor. Profanity. Chic promiscuity. A few violent deaths. Sexual humor. That’s unfortunate, because as action comedies go, this one delivers… The writing is sharp and funny…[and] the film closes with a hilarious series of outtakes.

Bob Smithouser, Focus on the Family
…there is magic in the movie that makes it an enjoyable experience. This movie is meant only to entertain us. It owes much to the road pictures of Hope and Crosby, and on that level it succeeds. “Shanghai Knights” is fun, and that’s all it tries to be…