for some strong language and a scene of sensuality 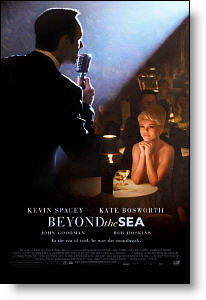 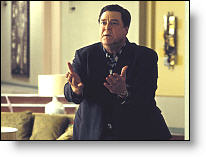 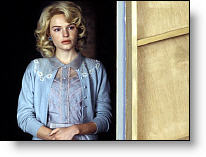 “In the era of cool, he was the soundtrack.”

I traveled a long way to see this film, since it’s only showing in major markets. And I have to say, I’m impressed. Seventeen years in the making, with endless writers, directors and stars attached at one time or another, this project was finally brought together by one man: Kevin Spacey.

Spacey, the “man who can do no wrong,” has played… let’s see, a couple of “psycho” or “iceman” killers; the heartless office manager in Glengarry Glen Ross; the voice of Hopper in “A Bug’s Life;” and… well, the GUY in “American Beauty.” And a variety of other, diverse roles. Still, I wouldn’t have believed he could play Bobby Darin, project a high-quality singing voice, inject the same intrasong banter as in the original recordings, and nail the on-stage moves. But, lo and behold, he does. Amazing work.

Bobby Darin (1936-1973) suffered Rheumatic Fever as a child, and overheard the doctor say that he’d probably not survive beyond his mid-teens. Therefore, he lived his life with an urgency born of the knowledge that he was living on borrowed time. He wanted to be a legend by age 25, and he succeeded. He played the Copacabana and Las Vegas. He sang in multiple musical styles: silly rock and roll such as “Splish-Splash;” lounge pop such as “Dream Lover;” and the edgy “Mack the Knife,” a tongue in cheek number which celebrates the work of a murderer. Later in his career, as a part of the Sixties counterculture movement, he sang ballads and protest songs. He was also a musician, composer, Oscar-nominated actor, and producer.

This film take on Darin’s life chronicles all of the above and more, even though it’s a mixture of fact, fiction, and fantasy symbolic material. Spacey also wrote, produced and directed the film. Some are viewing this as an ego trip, a vanity exercise. Well, if it works, it’s not vanity. And viewed as pure entertainment, it’s technically brilliant. The production values, such as period detailing, are very high. The acting (including that of William Ullrich who plays Bobby as a child) is uniformly good, and fitting to the film’s style. The music, dancing and choreography are great. If you’re not offended by Darin’s music itself, I doubt that you’ll have a problem with the musical portion of this tribute re-creation.

Language: In the film’s opening sequence, where Bobby is trying to make a movie of his life, there’s one use of f* and a slang sexual reference to the idea that having the signature song “Mack the Knife” at the beginning of the film would amount to climaxing too early (that isn’t the way they say it). In the balance of the film, there’s one more use of f* and a smattering of profanities and curses. I don’t have an accurate statistical word-count; but in my estimation the bad language, while unnecessary and annoying, is not pervasive.

Violence: Very sparse. Bobby and wife Sandra Dee have some marital spats. In one such fight, they have a race to see who can leave whom: They hurriedly pack their suitcases, then jump into their separate Cadillacs, then make up (after Bobby takes a golf club to his own Cadillac because he lost the race).

Sex/Nudity: Other than setting his mind to winning and marrying his movie costar Sandra Dee (Kate Bosworth), Bobby doesn’t display any romantic inclinations. And Sandra is portrayed on her wedding night as actually afraid of the marriage bed. (Most viewers would take this as an indication that she’s a virgin. Sadly, in real life she was molested by her stepfather starting at age 5, with her mother turning a blind eye, although the film doesn’t mention this.) Bobby tenderly assures her that nothing will happen until she’s ready. And when we see that she IS ready, the scene cuts away just as the two begin to kiss deeply. I thought that sequence was handled very well.

However, a later sequence between Bobby and Sandra is somewhat more explicit. He’s shown on top of her, probably running his hand over her breast (although from our angle, we can’t be sure whether there’s an airspace or not), then reaching for her crotch (but since his body covers and obscures hers, again we don’t know for sure what he’s doing). That’s as far as they get before someone comes bursting through the hotel room door that they left unlocked. “Marital” activity, yes, and less graphic than in many movies, but still unnecessary. If this scene were removed, I’d rate the Sex/Nudity as Minor.

In a true-to-life twist in the film, it’s discovered that one character had a promiscuous past. This behavior is shown as negative and destructive. It had to be covered up at the time; and when it’s finally revealed, it devastates the life of another character and permanently changes his personality.

In the Club sequences, there are showgirls with skimpy outfits and bare legs. And some of Bobby’s songs could be regarded as mildly sensual.

Miscellaneous content: Bobby and other characters smoke. Many people drink, and Sandra drinks to excess as a response to marital problems. Bobby is shown as a “too busy” father, and he and Sandra are at odds over many issues. There are some silly gay jokes: Sandra’s overbearing mother tells her she should have pursued Rock Hudson harder, since he’d have made a better husband than Bobby (this is only a joke to the audience, because of what we know in retrospect); and when Bobby disparages Sandra’s work by telling her that kissing Troy Donahue isn’t “acting,” she replies “YOU try it!”

Positive content: Bobby is shown (until 1968) as extremely egotistical and pushy, but this could alternately be viewed as single-mindedness in pursuit of a goal. He was devastated in 1967-68 by three major setbacks, two of which are shown in the film (the third was the divorce from Sandra), and he took some time off to rethink his priorities. When he returned to performing, he risked his career by singing “message” songs he actually believed in, rather than taking the “safe” route of just performing his old standards. He’s also shown, in 1960, fighting successfully for a black comic to open for him at the Copacabana, and thereby being the instrument of changing the club’s discriminatory policy (I don’t know whether that incident is true or not).

The portrayal of the late-Sixties Bobby as standing for something, while good in itself, is of course a way for Spacey to make a present-day political statement. A lot of anti-Vietnam War protest was really a protest against ALL wars. Therefore, showing that sentiment to today’s audiences amounts to a statement about the present administration’s Iraq policy as well.

There’s essentially no mention of God or religious themes in the film, either positive or negative. Aside from his antiwar and civil-rights sentiment, Bobby was also a “pro-choice” advocate and an opposer of so-called “adult censorship,” but those and other controversial views are not mentioned in the film.

Is the film worth seeing? Yes, for mature audiences interested in the material. The combination of biography and high-quality music is a rare treat. But since a large part of the moviegoing audience is under 25, if you live in a smaller city you may not have access to it until it’s released on Pay-per-view and video.