for brief language and sexuality 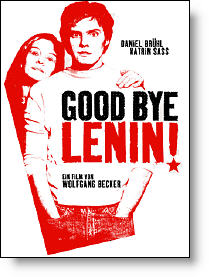 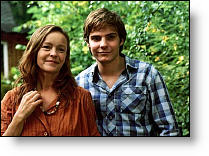 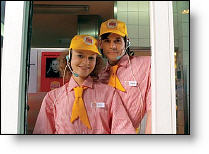 What would you do to protect someone you love? How far would you go? Are there ideas in life more important than money, possessions, or even freedom? Are there circumstances where lying or pretending are noble? These are just a few of the questions one ponders after watching the Wolfgang Becker directed film “Good bye, Lenin!”

This German language picture (with English subtitles) reaches out beyond the boundaries of language, culture, and politics to grab the heart and stir the soul. It is an immensely profound, yet simple, beautiful, and funny adventure, crafted with care and originality.

The story opens with Alex Kerner (Daniel Brühl) as a young boy in 1979 East Berlin. His dreams are of being a cosmonaut like his (and East Germany’s) hero Sigmund Jähn (the first East German in space). Such idealic dreams in eastern block countries rarely came true. And when we next see Alex, 10 years later, he is now a teenager with a menial TV repair job. He has a sister who now has a child with her ex-boyfriend. His father has left the family some years ago to go to the west to be with another woman. His mother is a proud East German who believes in her country, but believes it could still improve and take better care of its citizens. She is an active member of the party and works to better her country, from the inside. She believes that if all East Germans would leave for the west, then no one would be left to better their country.

The events of 1989 begin to develop rapidly. But as the DDR celebrates its 40th anniversary, Alex’s mother, Christiane Kerner (Kathrin Sass) suffers a heart attack that puts her into a coma. During the next eight months, as Christiane “sleeps,” the world around her drastically changes. The Iron Curtain collapses and the Berlin Wall is torn down. Western culture quickly advances into the former DDR. As the young people celebrate their new freedom, Christiane sleeps. Alex begins to fall in love with a nurse at the hospital where his mother is located. He plans his daily visits around Lara’s (Chulpan Khamatova) work schedule. As the relationship grows, his mother finally awakens from her coma, and Alex is carefully instructed by the doctor that she is still in serious danger and could die if she has any excitement.

But the world has changed so much. Alex knows that his mother would not be able to handle the news of the demise of her beloved country. Alex convinces his family and friends to therefore pretend that everything is just the same and that the DDR still exists. It is an immense undertaking. He changes her room decorations. He empties new brands of foods into old containers. He enlists a friend to help play old DDR news shows for his mother. He convinces his mother’s friends to play along. It is a 24/7 effort, all for the benefit of his mother, whom he loves and wants to be happy.

Alex recreates the simpler life of the defunct DDR every day for his mother. He himself even begins to enjoy the simplicity of her small one room world. This daily routine gives him a sense of purpose. Those around him begin to think he has gone to far, but Alex continues to strive to make his mother happy.

This scenario opens up several very comical scenes, which play with just the right tone of sentimentality and affection. You begin to wonder how long he will actually be able to continue with the plan. We are on his side, hoping nothing will befoul his wonderful motives.

Alex is not the only one who has lied however. This story holds many wonderful scenes of introspection, as characters search their hearts and motives. I will leave the rest of the plot for you to enjoy.

The entire movie is shot in a style which gives the viewer that impression of slightly degraded video quality. It really feels like East Germany of 15 years ago. The style and script draw you in, and you feel a part of the drama as it unfolds.

While most young people celebrated, for many older adults, the collapse of East Germany and the tearing down of the Berlin wall brought unwelcome changes. They had to relearn such simple things as money and shopping. Cultural values shifted. Those who believed in their country were pushed aside after reunification. Heroes of the DDR often lost status. It became a country where larger than life cosmonauts could end up taxi drivers. Out of love, Alex created a DDR that never really existed. A DDR that should have been-at least in his mother’s eyes.

It provoked in me the question, “Is it ever okay to lie?” Alex’s motives were noble. His love for his mother was pure. And yet he lied to her and convinced others to lie to her as well. Are there situations when it is okay to lie? Are the 10 commandments absolute? See this movie and debate these questions with friends and family.

A powerful theme pervasive throughout is that there are more important things in life than possessions. More important things than money. More important things than personal or even national freedom. Unconditional love for family is one of those things. Would you rather live in a free country with a family lacking love, or in a communist country in a loving, caring, self-sacrificing family? Thankfully many of us in America don’t have to sacrifice much one for the other. But is western culture inherently better? Does it promote more virtue amongst its citizens? Was risking one’s life to escape from the DDR to the west worth it?

This movie may have you rethinking some of your own priorities in life. It is not often when a movie can provoke those thoughts in the viewer. My wife, who is from what was West Germany, even gained further insight into the culture and thinking of the common East German through the viewing of this film.

Each character in this movie feels honest. They feel real. We can relate to each on different levels. And “Good Bye, Lenin!” has a plethora of levels, and I enjoyed each one greatly. The American film industry could certainly learn something about making a quality film from this one.

Because the picture is in German and subtitled in English, it tends to make the usage of profanity less offensive to me. There are a dozen such usages of various swear words, but mostly used within context and in more lighthearted ways. The Lord’s name is taken in vain on a couple of occasions, but again not gratuitously. The movie does contain two brief instances of nudity: a topless female (a western import) is seen on a television, and a male actor is seen completely nude for a second or two-not in a sexual situation.

When stacked up against some of the recent American movie offerings, this import from Germany is worthy finding in your city. It opened in Germany in 2003, and has been making the rounds slowly in the U.S.

You will laugh. You may cry. And, you will think about some of the deeper issues of life. Don’t waive at “Good bye, Lenin!” when it plays in your town. Go see it. Wunderbar!

William Arnold, Seattle Post-Intelligencer
…a German comedy that teeters between farce and a regretful sigh…

Rick Groen, Globe and Mail
…a bit long to sustain its premise, but a solid cast makes it seem even better than it is…