for some sexual references, crude humor and brief drug material 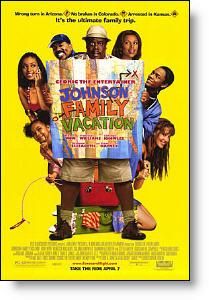 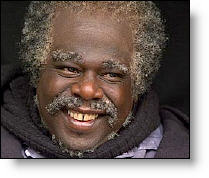 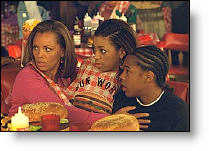 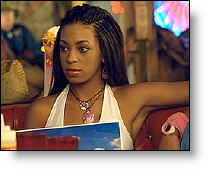 “Wrong turn in Arizona. No brakes in Colorado. Arrested in Kansas. It’s the ultimate family trip.”

“The Johnson Family Vacation” portrays real life scenarios of family dysfunction and transforms it into mature humor during their trip to Missouri. However, throughout numerous mishaps they seem to understand in the end the value of being a family unit, despite their collective dysfunctions.

Considering his usual, in-your-face black humor, Nate Johnson’s character (Cedric The Entertainer) is rather conservative in this film and does a brilliant job of removing street talk from his vernacular. However, his role is far from pure. There is some cussing and suggestive references, but overall he remains focused on his family. He teaches his children that flashy gold teeth are a result of having no dental plan, and that souping-up his Lincoln Navigator kills the resale value. Furthermore, he is not supportive of his son’s (Lavernius James: Bow Wow) ambitions for being a rap star.

His wife Dorothy (Vanessa Williams) has been estranged from Nate for three months, which is mentioned frequently—suggesting their lack of intimacy. The break-up hinged Nate’s lack of support for Dorothy’s desire to earn a Certified Public Accountant degree.

The eldest daughter (Solange Knowles) has a hard time with temptations involving the opposite sex and with wearing clothes that cover most of her body. Meanwhile, the youngest daughter (Gabby Soleil) has an imaginary dog she must take along on the trip, despite her father’s eye rolling.

Nate has two motives for attending a family reunion with his wife and children in tow. He hopes that the car trip will bring his family closer together, and, more importantly, he wants to beat his brother Mac (Steve Harvey)—who is also his rival—from once again winning the Family of the Year trophy. Their rivalry started during childhood and seems to furiously continue.

During the trip, Nate displays many masculine traits. He enforces prompt departure, the monitoring of fluid consumption with only scheduled rest stops, and the enthusiasm of everyone for his planned sightseeing adventures.

As the first day of their trip turns to night, Dorothy uses her promise of sex as a ploy for persuading Nate to disregard his itinerary and stop at a hotel earlier than planned. During this overnight stay, a series of events leaves Nate skinny-dipping in a hot tub full of swim0suited frisky women, and being questioned by a hotel clerk who leaves with his trunks. Lastly, he is caught standing naked in front of an anonymous family in the lobby while en route to his room.

The following day while traveling through Colorado, they pass a nun who is stranded with apparent car trouble. With the suggestion of his youngest daughter to assist her, Nate states, “Haven’t I taught you anything? Never pick up strangers.” Yet, driving not far down the same dirt road, Nate comes to a screeching halt when he sees a scantily dressed young woman hitchhiking. He then proclaims, “What would Jesus do?”

Nate’s son, the wannabe rapper, unsuccessfully tries to convince his Dad that he needs a bathroom stop. So, with quick thinking and relief only moments away, he grabs a super-duper soda cup out of the cup holder and urinates, while Nate listens intently to old school music from back-in-the-day. Only minutes later, Nate picks up the full cup and with a whiff of the urine, he litters—hitting a motorcycle cop following just a few feet in the rear.

After finding a reefer pipe (drug paraphernalia owned by the hitchhiker), they all end up under lock and key in jail. Luckily, the Sheriff is in the midst of doing his taxes, and Dorothy comes to the rescue, discovering impressive tax deductions for him—in return for their freedom.

Uncle Earl (Cedric The Entertainer), who appears later in the story, is Nate’s opposite—an older man who speaks freely of his attraction towards Dorothy with suggestive phrases.

At the family reunion, Mac greets his brother with discouraging titles such as, “the second mistake, the second born.” During prayer over their bountiful feast, the two brothers pray for a mixture of blessings while reminding God of each other’s misfortunes.

The overall message of the film seems to be that it is difficult for a father to balance the desires of his family while at the same time exhibiting a leadership role and humility—and that love and respect is most important within families. But, unfortunately, it is often not practiced. Through trial and error a family unit can interact successfully and attain true value in life—family matters most.

Positive—We went to see this movie because a Christian friend said it was a good, funny, clean movie. What we got from the movie… It was funny, and had some sweet points… showing a family pull together in the end like a family should. A few questionable things. And some small somewhat offensive scenes. Nothing extreme. Terrible acting. I would recommend seeing the movie, but I would rent it. It is not worth $7 or more ticket. And I would suggest parents screen the movie first and use their own judgment based on the ages and maturity of their children.
My Ratings: [Better than Average/2]
Kelli, age 28
Positive—I did not find this film offensive at all. I found it a hilarious family film. I took my 4 year old son, and he loved it!
My Ratings: [Excellent!/5]
Nicole, age 41
Negative—I did not need to go past the first hotel scene. Anyone who would think it is funny for a wife, especially an estranged wife, to use the promise of sex as a weapon needs to rethink who Christ is in their life. Not alone are the majority of moral messages negative. It is obvious why they are having marital problems. The result shows up in their children’s attitudes. I find it very disappointing if any Christian thinks there is any value to this film or that it is even neutral. I live in Southern California and I see too much of this going on in the church. This movie disturbed my soul.
My Ratings: [Extremely Offensive/3]
John Omahen, age 47
Comments from young people
Negative—…here are things that I didn’t like about this film:
I found this movie dumb; it had nothing funny about it. It could have been funny, but it wasn’t. It had no substance to it to make you want to buy it, or see it again. I’d pass; I wish I had. I spent $10.00 on this movie.
My Ratings: [Average/2]
Michellebob, age 14
Movie Critics
…a surprisingly family-friendly comedy…
Eleanor Ringel Gillespie, Atlanta Journal-Constitution
…A few obscenities, a witch’s chant, sexual innuendo and crude bathroom humor take away from the fun…
Mary Draughon, Preview Family Movie and TV Review
…a distinct if more genteel throwback to National Lampoon’s popular 1980s “Vacation” series starring Chevy Chase. Mild in both humor and impact…
Frank Scheck, The Hollywood Reporter
…feels too much like a retread of the National Lampoon “Vacation” movies…
Robert Denerstein, Rocky Mountain News