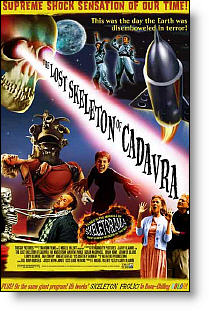 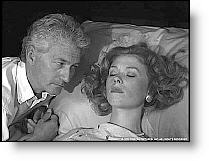 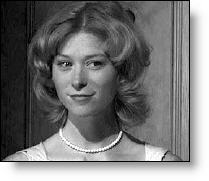 Here’s what the distributor says about their film: “It’s 1961 and Dr. Paul Armstrong (Larry Blamire) and his lovely wife Betty (Fay Masterson) head into the mountains in search of a recently fallen meteor containing the rare element atmosphereum. Paul needs it to help him with his science work, but Betty’d just as soon have a vacation. Also in the area, sinister Dr. Roger Fleming (Brian Howe) asks trusty Ranger Brad (Dan Conroy) the whereabouts of Cadavra Cave, mysterious home to rumors of a legend of the Lost Skeleton.” That night, both parties witness what appears to be yet another meteor falling. Immediately after, a local farmer is killed by a horrible, unseen thing. Is there a connection? Indeed there is. The second meteor is actually a disabled alien spaceship with a strange couple from the planet Marva, Krobar (Andrew Parks) and Lattis (Susan McConnell). These aliens discover they also need Atmosphereum to power their really high tech ship, and notice their horrible pet mutant (Darrin Reed), which they travel around with for some reason, has escaped. Unfortunately, Dr. Fleming discovers he also needs the atmosphereum to bring to life the dreaded Lost Skeleton of Cadavra which he finds in the cave.

After the aliens disguise themselves as Earth people with the aid of their “transmutatron,” Dr. Fleming swipes it and morphs four different forest animals into his own ally—the beautiful cat-suited Animala (Jennifer Blaire). Now everyone’s after the atmosphereum and the Armstrongs find they have their hands full, capturing the mutant, stopping the evil scientist, and vanquishing the power-mad Skeleton who wants to rule the world.”

The “abra” of the cadaver of this bare-bones budgeted science-fiction parody, Lost Skeleton of Cadavra, is that it endows laughs to a field of bone-dry material using extreme tongue-in-cheek humor. As an embracingly “B” movie, it earns an “A” for authentic comedy and successful spoofing of its genre.

As the writer and director for this lampoon, Larry Blamire has cast himself as the lead character, Dr. Paul Armstrong, who goes out into the country with his wife Betty (Fay Masterson) to “do science.” They are in search of a meteor that has recently hit the Earth containing “atmospherium,” but run into conflict when another scientist Dr. Roger Fleming (Brian Cox), and two aliens from the planet Marva (Susan McConnell and Andrew Parks) are also on the hunt for this same cosmic element.

To caricature the texture and feel of these 1950s-type shows, certain rudiments of the science fiction genre are intentionally employed, namely black and white photography, overly stilted dialogue, bad acting and cheesy special effects. Even if one is not very familiar with all of the references, the jokes are so clearly done (sometimes over done) that anyone could still have fun and enjoy them.

Having committed to this style of movie and the dictates of this era of entertainment, there is also no foul language or nudity added. There is an episode where the Mutant (Darren Reed) attacks someone, but it is amusingly shot from his point of view and refrains from showing any of the actual violence. Another character, Animala (Jennifer Blaire)—created by Dr. Fleming with the alien’s “transmutatron”—entrances the scientist Paul with her “rock dance” in order to steal the atmospherium. But, again, it’s as risqué as anything from a 1950’s show.

To further exemplify the tone of this era, there is a moment where the scientist Paul is troubled and exclaims, “God have mercy on us all.” Like everything else, it is purposefully delivered with affectation. The plot itself also adheres to the convention of the genre and finishes off with a simple, moral message.

The speech of the aliens is reminiscent of the kind of humor found with the Coneheads from Saturday Night Live and the atypical comedy of this piece—like that of Waiting For Guffman—is a refreshing break from more safe, commercialism too often used in cinema. Perhaps it’s not worth paying full price, but if you need a good, clean laugh, it’s worth at least the cost of admission at a matinee.

Violence: Minor | Profanity: None | Sex/Nudity: None

Positive—This film is a black-and-white delight. “The Lost Skeleton of Cadavra” points out the loopy oddities in the sci-fi conventions of the 1950s by meticulously, cleverly, and lovingly recreating cliché after cliché, piling one on top of another. The resulting experience, at least for the audiences I have seen it with, is a giddy, delightful series of recognitions of these old sci-fi archetypes taken to extremes.

But not in your typical parody fashion! There’s something much more celebratory about this film than your run-of-the-mill parody. It’s a friendly, affectionate hoot that never really tries to claim superiority over its subject matter even as it points out absurdities, and the result is quite endearing and disarming.

I was fascinated by the warmth and affection that this film has brought out of me for this earnest, stilted style of 50’s storytelling which is so out of vogue with modern amoral special-effects-laden movies such as “Independence Day” that often repel me. It’s refreshing to see a film that is so unique, intelligent, good-natured, funny, and inviting. The film itself actually comes across quite a bit warmer than the films it gently spoofs.

I almost always have a strong sense of the “god” of a film, the director who determines what happens to the world of characters that we’re watching. I look for a film whose “god” comes across as loving the story, the characters, and the audience. Only these types of films seem to give me pleasure, I think because they are in some way a reflection and affirmation of our loving God. Director Larry Blamire gave me the sense of a creator who does indeed love his subject matter, his characters, and his audience.

An added bonus is that the film has reminded me of the silliness of my own self-importance that can make me take life too seriously as the characters do in those sci-fi B-movies. In some ways maybe I’m recognizing good and bad parts of myself in those old archetypes, and the film wound up fostering a celebration of recognition in my own imperfect humanity mixed in with a bit of grace that it’s all going to work out okay. And all from a low-budget sci-fi parody. Go figure!

I rented Lost Skeleton on DVD and watched it with two sets of friends, then purchased the film within the week. I’ve taken great pleasure watching certain scenes multiple times, soaking up the layers of humor in them.

A word of warning on the blooper reel for those sensitive to language—you may want to skip this section of the DVD due to language. You won’t miss much. The commentaries are a little tamer. The film itself is just about the softest PG I’ve ever seen, keeping in tune with what Larry Blamire calls the “boy scout” aspect of many of the films he was sending up.

See it with a group of B-movie fans. I think you’ll have a good time, and maybe even some good discussion afterwards… or at least some running jokes for weeks to come. “Atmospherium for you, atmospherium for me…”
My Ratings: [Good/5]

Harold Buchholz, age 38
Positive—This movie will never get old. It already is old! I love “Skeleton,” it’s better than the real McCoy. I think since “Raising Arizona” I’ve finally got my new all time favorite dumb flick. I’m looking forward to (hoping there will be??) DVD, but certainly hope to see it again someday in a theater where it belongs (and in one I don’t have to drive 35 miles to get to!!. SOOO much fun.
My Ratings: [Excellent!/5]

Robert Grimm, age 22
Positive—I love cult movies! They are generally so original, so completely far away from the looking-over-your-shoulder-copying-the-crowd-gotta-make-a-quick-buck-now film herd that they come in like a breath of fresh air. Also, they are often immensely quotable, and “The Lost Skeleton of Cadavra” scores big there: “Rowr. Do the rock dance.” “…Amish, terrarium…” “I’m afraid I think we’re terribly lost, I’m afraid.” “I love my soft cloth funnel.” “If only it did have hands… If only it did have hands…” “You know what this meteor could mean to science; it could mean actual advances in the field of science.” “If I wanted to live a safe life, well, then I guess I wouldn’t have married a man who studies rocks.” Oh, stop me, before I give away every gut-buster in the movie! Also, there is something fulfilling about giving a hand up to a struggling filmmaker, especially when they are making a movie out of love for the style of the film. It’s all so wonderfully anti-corporate, anti-global control, anti-homogenous, and pro-human spirit. Bless the people who break off from the herd and do their own thing; they are what makes life here interesting.
My Ratings: [Excellent!/5]