Get Rich or Die Tryin’ 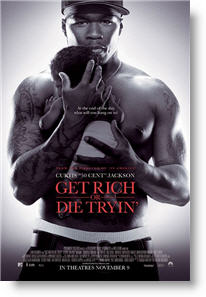 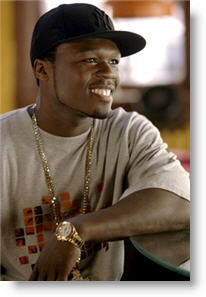 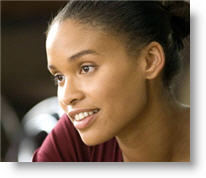 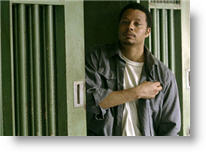 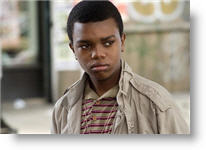 At the end of the day, what will you hang on to?

If you had asked me who Fifty Cent was before I saw the trailer for Get Rich or Die Tryin’, I wouldn’t have been able to tell you. I am not a fan of rap music, nor have I followed the Billboard popular music charts since the early 90s. Why then, did I find myself shelling out $7 to catch a matinee of his debut movie, which tells the story of a gangsta rapper who uses music to try to escape the world of inner city drug dealing?

The answer is that I just HAD to know why Jim Sheridan, the director of 2002’s most enchantingly beautiful movie “In America”, had decided to direct this gritty, violent urban drama. Did he really think he could succeed where so many others had failed? Does anyone remember Mariah Carey’s “Glitter”? Or Brittney Spears’ “Crossroads”? Or Eminem’s “8 Mile”? Probably not.

The truth is that it’s incredibly hard for musicians to cross over into movies. Acting is a difficult, time-consuming trade to learn. The great Sanford Meisner said that it takes 20 years to learn how to act. Could Fifty Cent take a few months’ worth of crash courses and pull it off? Not quite.

Get Rich or Die Tryin’ is loosely based on the life of gangsta rapper Fifty Cent. Fifty plays Marcus, a young black man who makes his money selling drugs, but longs to be a rapper. Marcus’s mother was also a drug dealer, and we get to see how she is murdered by Majestic, a sort of middle-management drug dealer, leaving Marcus in the care of his grandparents. He stays with them only a short time before deciding that the drug world is the only thing that will earn him money, power, and respect. The rest of the movie deals with Marcus trying to leave this life behind for a career as a rapper.

Sheridan does a great job directing the film. He has an excellent eye for visuals and, judging by Fifty’s passable performance, he is also skilled at making mediocre actors look good. Fifty himself is not awful. He has decent acting instincts and is engaging as the character he portrays (which I’m guessing is very similar to himself). Unfortunately, his charisma doesn’t make up for his one-dimensional performance. He plays a man who keeps all of his emotions inside, so what we get to see, most of the time, is a glare and a scowl. The one scene where he shows more of himself is when he meets his old grade-school flame as an adult. (Her parents moved her away after they found an incredibly explicit rap tape Marcus made for her.) When they talk again for the first time, Fifty is almost charming, but the brief scene soon passes, and he returns to his brooding.

I think what bothered me the most about “Get Rich” was the skewed worldview it presented. Kids need heroes to look up to, but now popular culture (which the gangsta rap movement is part of) is creating anti-heroes. Scores of teenagers idolize Fifty Cent. And what he preaches to them is violence, hate, drugs, and objectifying women. I wrote down some of the quotes from the movie that really resonated negatively with me: “I’m a gangsta, grandpa, and proud of it!” “Don’t show no love, love’ll get you killed.” “Crack meant money, money meant power, and power meant killing.” “I just want to kill somebody. (Who?) Anybody.”

Hollywood is producing more and more films that deal with this nasty, gritty side of life. Morality is slowly being siphoned out of the movies, leaving us with a cold, valueless society where nothing is judged as wrong. After watching “Get Rich”, I couldn’t help but think of how many teenagers and young men (the target audience of the film) would see this fictionalized life story of Fifty as cool. Who would see nothing wrong with drug dealing, robbing, killing, and doing it all in the name of money. It’s a very desensitizing film to sit through. I think its title says it all: Get Rich or Die Tryin’. It’s about nothing but killing and money.

I wanted to be surprised by the film… and with Jim Sheridan at the helm, I thought I might be. I thought maybe Marcus would see the error of his ways and flee the drug world for rap music. But that’s not the case. Marcus is a thug as a dealer, and he is a thug as a rapper. His raps are explicit and violent, and they deliberately attack his enemies. He never comes to the realization that drug dealing is wrong, he just sees rapping as a way to make even more money—less dangerously.

Christians, there is nothing in this film worth subjecting yourself to. It is, from start to finish, full of bad language, nudity, and violence. John’s gospel tells us that God loved the world so much that He gave up His only Son as a ransom for all of us. “Get Rich” shows us a glimpse of the flip side of God’s love: the world that Satan offers Christ, if He will only worship him. A world full of self-worship and the pursuit of the almighty dollar. I couldn’t help but think of how Jesus urged us to guard our hearts, and how viewing this film was like opening your heart up to everything it should be avoiding.

Negative—Once again Hollywood panders to the gun culture of Ghetto Rappers. What I found truly abhorrent with this film is there is no redeeming social value to it. We have a rap star (50 cent) who in my opinion does nothing more than glories in his rags to riches story. It really isn’t a rags to riches story either, his real story is one of drug dealing, shootouts with other gangbangers and success due to taking several bullets and not dying. Congratulations 50 cent, you managed to be shot and wounded several times, but lived to tell the tale, unfortunately it’s a tale too well told in the inner cities of North America and glorifying it only makes matters worse. Do not waste your money on this movie, if you need to get rid of 8 or 9 dollars go to the local shelter and donate it to a family whose father is one of the many dead African Americans who tried to live this life.
My Ratings: Extremely Offensive / 1

Andrew Glexnor, age 41
Negative—Gave this a negative not because it was THAT bad of a film necessarily, but because it didn’t really do anything for me. I write for a local paper and did a review on the film (from a strictly quality standpoint, not based on moral considerations) and basically said that it was no “8 Mile”, and it was hard to carry movie with this much going on with 50 Cent, who mumbles and really doesn’t display much acting or rap talent. He isn’t all that bad in the film, he’s fine, but he’s not a great rapper either, and so the film doesn’t work because he doesn’t stand out in any way. “8 Mile” worked because Eminem did a good job acting and an incredible job rapping. Now, neither film has much morally going for it, so really, I can’t recommend this film based on either filmmaking quality or a Christian message, because it has neither.
My Ratings: Very Offensive / 2½

Doug Coleman, age 23
Neutral—…This film in my opinion depicted real life issues. I enjoyed the movie along with my family and friends. We could have done without the nudity, but it was nothing major; these are the times that we are in and some people can’t use their imagination. I think 50 Cents did an excellent job, and I would pay to see another movie he stars in. I felt this was in part educational for my children to see what they do not want to be a part of and how important an education is. …
My Ratings: Offensive / 4

Pittsburgh Post-Gazette, Scott Mervis
…The moviemakers slam down our gullets the star’s own broad-stroke perception of crime as the main way urban blacks can ‘get rich or die tryin’,’ as if it’s medicine. …

Baltimore Sun, Michael Sragow
…rich and convincing texture, a drama with power and anger… the movie is closer in tone to ‘Scarface’ than to “Hustle and Flow”…[3/4]

Chicago Sun-Times, Roger Ebert
…a captivating tale… a plausible and decently entertaining street narrative based upon the underdog’s rise from a coke dealer to sensational rap phenomenon. The tale is laced with big bangs, loud music and thugs with drugs galore. …[3/4]

Boston Herald, Chelsea Bain
…on the basis of his underwhelming performance… 50 Cent shouldn’t plan on giving up his day job just yet. …this shapeless and derivative gangsta saga is no “8 Mile”. …[2/4]