for some sexuality, drug references, brief violence and language 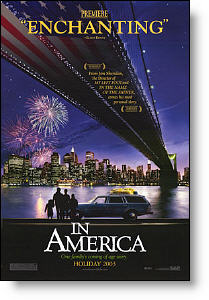 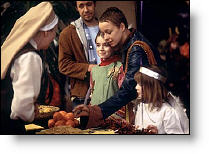 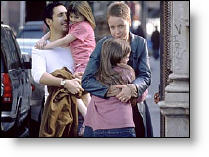 Find biblical parenting and marriage tips in our Family Answers section. Wondering how to deal with your children or spouse in the best Christian way? Learn what the Bible has to say. Practical answers supplied by experts.

Have questions about life before birth, or a woman’s choice about pregnancy and abortion? Visit our on-line question-and-answer section. Find accurate answers to frequently-asked-questions, like: “Is the unborn human less than human at any stage?,” “Doesn’t a woman have the right to control her own body?,” “Is abortion justifiable in case of rape or incest?,” and many more.

Does God really exist? How can we know? If God made everything, who made God? Answer

Where can I find HOPE for living? GO…

Opening your front door to a familiar friend is like going to see “In America”, which we welcome in because we can trust it, and believe it only has good intentions for us. Instead of taking hold of it and judging its simplicity, it is hard to resist how it takes hold of us, blesses us, and eventually rests in us like a warm cup of tea enjoyed in the presence of good company.

This film does not shy away from veraciously depicting life struggles (terminal illnesses, pregnancy complications, death), but in the end these matters assist in making the film all the more honest. It does not just hand us a series of happy moments, but allows us to feel the gravity of more severe emotions and hardships so it can be a sincerely uplifting film.

Director-Writer-Producer Jim Sheridan (“Bloody Sunday,” “In the Name of the Father,” “The Boxer”) has constructed a film not only with his own family (Naomi and Kirsten Sheridan), but has also created it based directly on his own poor Irish family. Making this autobiographical story even more personal is the dedication at the end to the “memory of Frankie Sheridan.” “Frankie” is the name of the son’s character whose death the family in this story is struggling to get past.

The story begins with an immigrant Irish family moving to New York City where the dad, Johnny (Paddy Considine), plans on pursuing an acting career. Samantha Morton (Oscar nominee for Sweet and Lowdown) portrays an array of complexities as the mother, and the two young girls Christy (Sarah Bolger) and Ariel (Emma Bolger) simply steal our hearts and give us the purest performances of the show.

To note some more intense moments, there is a sequence which involves the main couple making love (some nudity), juxtaposed with Mateo (Djimon Hounsou), a fellow tenant, filled with angst and painting in his apartment, and a lightning storm. (Beyond effects, there is meaning to be discovered in this sequence.) Additionally, the language is exceptionally clean, but there is one moment where our protagonist is at the end of himself, and, in a moment of anger, drops the “f” bomb.

Although we could only be frightened by our introduction to Mateo (Djimon Hounsou), it is hard not to recall Hounsou’s performance from Amistad and feel a definite liking towards him. Of course, we are initially set up to be afraid of him here, but if you do sense some sympathy, it will not be disappointed.

Probably the strongest theme this film deals with is the idea of believing. The family is Catholic, but since the death of their son, the dad, Johnny, has shut off his belief in God. There is a moment when Johnny is tucking his girls into bed and they expect him to kneel and pray with them like Sarah, their mother. But even for his own daughters, he refuses.

Also woven into this narrative is the issue of letting go of the past. From the very beginning, we discover that this family has lost a child, “Frankie,” and are now embarking on a new life in America. This struggle, combined with Johnny’s belief in God, build together and find a kind of satisfying resolve by the end.

“In America” is about a family and for a family. It is honest, but not always easy. If anyone has struggled like this family has, seeing this film can be very heartening.

Editor’s note: Critic Michael Medved published an enthusiastic review of this film. He says it “not only deserves consideration as “The Best Film of 2003” but also qualifies as one of the finest pro-life, pro-family movies ever made.”

Mark Caro, Chicago Tribune
…The immigrant life has been depicted on screen many times, but never with quite the freshness and lack of sentimentality that mark In America…

Margaret A. McGurk, Cincinnati Enquirer
…Our grade: A …wonderful tearjerker …Put this trip on your calendar now.

E! Online
…It’s a wistful yet penetrating film, shot through with magic realism and life-affirming humor…

Walter Addiego, San Francisco Chronicle
…The portrayal of real life and tragedy carries this story to the inner recesses of the heart, but the film does have a few short, unnecessary elements that may concern parents.

Troy Dandrea, Preview Family Movie and TV Review
Positive—This movie was so amazingly accurate in its portrayal of human emotions, redemption and the journey’s we take to get from the trenches we crawl in to just finding peace again. I agree with the reviewer’s opening sentence, this movie is like an old friend! I was so surprisingly touched by this movie that I had to, in fact go back to see it again. My husband and I have felt the loss of a child, and like most people have felt the emptiness of a life with anger at God. This movie, in my opinion is something that should be seen because its real and with the tweeking of a few different subjects this movie could easily be each one of our stories. is it a religious movie? No… but that does not stop God from shining out triumphantly throughout it. The sequences regarding the baby and Mateo are not to claim reincarnation; they are not even insinuating that these events are happening at the same time. The filmmaker is merely showing how fragile and beautiful life is, and the thin line between the two. God chose to take Mateo home, just as God chose to breathe life into the baby. It all worked out, and this family’s life began to heal because of God’s sovereignty.

Even the “sex scene” that could be objectional—it is symbolic of the same message. The bottom line, in my opinion, is we get so wrapped up in the routine and circumstance of our little lives, we easily lash out at others, regardless of their circumstances because we are so consumed with self. This movie is a shining example of God, his power and how we should embrace love of others. God will work in that. Often time heals through that (as he did with this family) but ultimately our lives will be better and more fully blessed because of that love.
My Ratings: [Better than Average/3½]

Misty Wagner, age 27
Positive—I cried 8 separate times during the course of “In America.” This is a triumph of a film. This family, their love for one another, their plea to be able to survive in this country, and the pain that exists because of the loss of a son and brother, makes for one of the most powerful films I have ever seen. There is a scene in which the father is playing a game at the fair. He has to throw a ball through a hole three times. Each time he misses, he must pay again, but if he does it, then he gets all of his money back, plus a prize. We watch him sink dollars and dollars into the game. Why? Because he cannot stop? No, because he can see that his daughter’s need to see their family succeed, they need to see good things happen, whether they quite understand that or not. That level of observation is rare among parents in movies, and I was very moved by it. I was moved all throughout the movie, during the everyday trials that this family faced. And you know, it is ALMOST a family film, too. Aside from a sex scene, between a husband and wife, by the way, this would be suitable for children. But for teens and adults, it is one of the most uplifting movies I have seen in a long long time.
My Ratings: [Good/5]

Jason Eaken, age 20
Negative—My main objection to this movie is that several times the parents put their young children in dangerous situations. The movie takes place in a rather seedy part of New York City. At one point, the mother sends the two young girls out alone at night during a terrible thunderstorm to the diner across the street so she and her husband can have sex. I also found the bedtime “prayer” offensive. God did not exist in this movie. The children prayed to nobody. At another point in the movie, a character dies as a baby is being born and the filming indicates that we are supposed to belive that the dying man’s soul is being transferred into the baby. The filming was unique, which is probably why the critics loved this movie. However, I found the “home video” portions of the movie rather dizzying to watch.
My Ratings: [Very Offensive/3½]