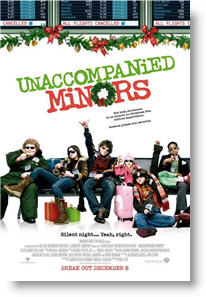 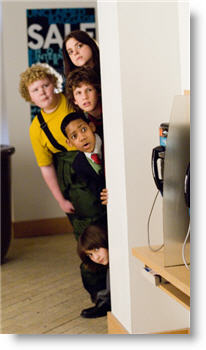 Here’s what the distributor says about their film: “It’s Christmas Eve and a huge blizzard has just shut down the airport, threatening to ruin holiday plans for all stranded travelers. Snowed in en route to their father’s house, two “Unaccompanied Minors”—dubbed UMs—Spencer and his little sister, Katherine, are ushered to the airport’s Unaccompanied Minors Room, a holding cell for dozens of stranded, parent-free kids from all over the country. Caught in the crossfire of projectile cupcakes and juice boxes and desperate to escape, Spencer makes a run for freedom along with four other UMs, who couldn’t be more different if they tried: spoiled rich girl Grace, trailer-park tomboy Donna, academic overachiever Charlie and comic-book geek Timothy Wellington a.k.a. “Beef.”

With the airport’s peevish Passenger Relations Manager Oliver Porter, his lackey assistant Zach Van Bourke and every airport security guard hot on their trails, this group of UMs from cliques that don’t mix learn to ditch their differences and help each other flee the clutches of airport authority.

Meanwhile, Katherine and the other UMs have been herded to a nearby hotel to wait out the storm. Determined to reunite with his little sister and fulfill her unspoiled vision of Santa Claus arriving on Christmas morning, Spencer enlists the help of his UM posse. Working together as an unlikely family of their own, they outwit and outrun Oliver and his crew. Plummeting through baggage chutes, rummaging around unclaimed luggage and canoeing down a snow-covered hill, they turn Christmas at the airport into holiday pandemonium and, along the way, prove that the holidays aren’t about where you are, but who you’re with.”

Positive
Positive—This film deals with a group of children who are stranded in an airport on Christmas Eve, with no way to reach their families. The group is a wide variety of youngsters, each with a unique and unforgettable personality. They escape from the dreadful dungeon like Unaccompanied Minors room, in order to escape to the lodge nearby so that they can save Christmasw for the oldest boy’s younger sister, who is staying there. Although they are different, the youngsters quickly band together and go on an unforgettable adventure together. The mischievious misadventures are a joy to watch.

As far as acting goes, the children are wonderful, and make this film a cut above other similar films. Young Quinn Shephard, who plays the character of Donna, is particularly memorable. She plays a tough girl, who has a warm heart beneath her defensiveness, which slowly reveals itself as the movie progresses.

The overall message of this film is that no one should have to be alone on Christmas, and that even if you can’t be with your actual family, you should give of yourself to those you are with. Although the children cannot be with their families, they grow together throughout their adventures, and grow to genuinely care about each other, and form true friendships. The childrens' caring extends beyond each other to include the other stranded passengers in the airport, as well as the surly, grumpy airport manager, Mr. Porter.

Also, this film includes virtually no offensive content. It does not include disgusting sexual references, much unlike “Deck the Halls” and “The Holiday,” two other Christmas films that were released recently. It is pure, clean fun that will delight children, and will remind adults of the joys of childlike playfulness.

This film left me with a warm feeling inside, much like drinking a hot chocolate would. It is one of the few movies I plan on seeing again while it is still in thaters, and, coming from me, that is saying a lot.
My Ratings: Better than Average / 5

Negative
Negative—The kids are rude and crude, the plot lacks focus, and there is little redeeming value. Don’t blow your money on this mess!!
My Ratings: Offensive / 1½

Dana, age 21
Comments from young people
Positive—I really LOVED it!! At first I wasn’t going to go see it… But then I decided that it couldn’t be that bad. I’m so glad I did. My mom and I laughed throught the whole thing. And there wasn’t a single thing that was wrong or really offensive. Please go see it you will be really glad you did.
My Ratings: Good / 4½

Karma, age 12
Positive—I went to see this movie with a lot of my friends that go to my youth group at church, and we ALL thought that this was a really funny, clean movie. There is nothing inappropriate in this movie and I was laughing almost the whole time! If your looking for a funny family movie to watch, see this one. Its really good!…
My Ratings: Better than Average / 4