for violence, language and some sexuality. 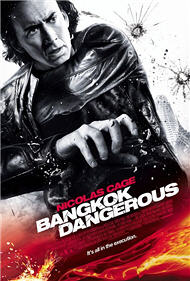 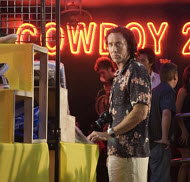 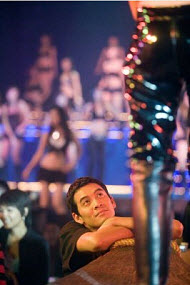 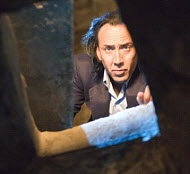 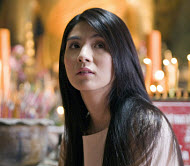 To tell a truth, I have never heard of this movie (a remake from a 1999 movie of the same name by the same directors) or it’s main character. All I knew is that I really like Nicolas Cage as an actor because of his strong screen presence and his usually imaginative, off-beat approach to his portrayals.

I figured this one would be much along the line of “Face/Off” or “Con Air.” Not two of his best, but they were imaginative, and he always gives a performance that one wouldn’t expect. Something with a twist.

Unfortunately, for all it’s hoped for thrilling chase scenes and location shots, there isn’t much for “Bangkok Dangerous” to be spouting about. It is just another wanna-be sex-drugs-and-violence movie with no redeeming qualities. The main character is a deeply withdrawn, sullen man who has the horrible profession of hired assassin and therefore no morals at all. The script takes the audience through the final part of his professional life. The one thing that gets him into trouble is that he makes the mistake of “caring” about someone.

OK. I missed where that is a “bad” thing.

“Bangkok Dangerous” follows the final days of the life of high-powered, top-paid hired assassin, Nicolas Cage’s character, Joe (we never know his last name), who is shown killing individuals who, as the secular world views, as those who don’t deserve to live anyway. Men who buy and sell young girls on the slave market, are murderers or drug dealers, dangerous figures of the underworld of society.

Joe’s next, and last, assignment takes him to Bangkok where he picks up his instructions and finds an Asian street hustler named Kong (Shahkrit Yamnarm) to help him do his dirty work. Joe’s main rules to staying alive is never give your name, don’t talk too much, get out with the money and disappear forever, and never, under any circumstances get emotionally involved with anyone you meet. It seems that Joe is slipping, because he doesn’t follow his own life codes, and makes a friend out of his new young assistant, Kong, and also finds himself falling for a sweet deaf girl, Aom (Panward Hemmanee), who works at the local pharmacy.

Over the course of this dark, bloody, violent movie, Joe is chased not only by men who wish to kill him, but by his inner demons. He is torn between having some beauty and truth in his otherwise violent life and getting out while the getting’s good. Getting out would mean his survival—staying, in his certain death. Even though there are places in “Bangkok Dangerous” that might be a fertile soil to have Joe repent and perhaps be forgiven and turn his life around, because there is no God within this story, he has no out but to end up in a bloody, although portrayed as sacrificial, death.

As is expected in a film of this genre, there is murder, blood and violence. The rating of “R” is appropriate. There are many scenes in bars, where there are drugs, drinking, smoking and women dressed in seductive clothing, as well as half-dressed young women and upper female nudity. Men are shown with their hands on female breasts, and there is much foul language, which includes the f-word many times in subtitles. There is one short scene showing two females with one male having sex, but they are not the main characters. The main character says the f-word once, and surprisingly, the other characters who use foul language do so through subtitles, as they are speaking in their foreign tongue throughout the entire movie. I will say that there are no love scenes between the main characters of Joe and Aom, and that their love is portrayed as sweet and very innocent, in sharp contrast to what Joe actually does for a living.

There is dismemberment and scenes of graphic violence. One where a man’s hand is severed off and shown wiggling in it’s own blood, and another during the finale, where a man is blown up by an explosive and his body is cut in half, shown in a very bloody, realistic close-up. Another man is shown being drowned in a swimming pool, and during the end of a speed boat chase, Joe is shown shooting the man he is after, riddling the body with bullets that go through the body, the boat and into the water. Streams of blood are shown in the water surrounding the boat. At the end of the film, Joe shoots not only himself, but the underworld boss he’s been chasing, some of this scene was filmed in slow motion and is quite realistic and disturbing.

“Bangkok Dangerous” is not “National Treasure,” so for those families that figure that Nicolas Cage’s last few films were at least partly family-friendly, this one is adamantly not. This film is not for children of any age.

I can say that no Christian family will want to see this film, especially those with young boys who are looking for a role model. Christian parents: Keep Jesus as the role model to end all role models. I must say I haven’t seen many mainstream movies lately with characters who can be an appropriate model for our young, boys or girls, to seek after. We are becoming ever more forced to go to the Bible in search of the One who can show the proper balance of strength, love, courage, wisdom and boldness. That is a positive thing. God sometimes has to force us to stop and decide what we will do, and He will always drive us back to Scripture to find the answers.

There are four rules that Joe lives by. I think we can find some rules that were laid down by God that make much better sense.

God encourages to ask, “Have you understood all these things?” Jesus asked.

He said to them, “Therefore every teacher of the law who has been instructed about the kingdom of heaven is like the owner of a house who brings out of his storeroom new treasures as well as old” (Matthew 13:51-52).

Joe says, “Take no interest in people outside of yourself.”

God encourages fellowship, “We proclaim to you what we have seen and heard, so that you also may have fellowship with us. And our fellowship is with the Father and with his Son, Jesus Christ. We write this to make our joy complete.” (John 1:3-4)

God encourages us to stay and to persevere, “Watch your life and doctrine closely. Persevere in them, because if you do, you will save both yourself and your hearers” (1 Timothy 4:16).

God agrees here, for his life-changing grace will erase every trace of sin from every heart who comes to him in repentance—even men like Joe.

“In order that in the coming ages he might show the incomparable riches of his grace, expressed in his kindness to us in Christ Jesus. For it is by grace you have been saved, through faith—and this not from yourselves, it is the gift of God—not by works, so that no one can boast” (Ephesians 2:7-9).

So repent (change your mind and purpose); turn around and return [to God], that your sins may be erased (blotted out, wiped clean), that times of refreshing (of recovering from the effects of heat, of reviving with fresh air) may come from the presence of the Lord!

And that He may send [to you] the Christ (the Messiah)!

Negative
Negative—This is not a movie to take your kids to. The theme of redemption is *almost* played out, but the main character’s story is nasty throughout, and ends just as violently. The body count could have filled the theatre, with some particularly gruesome and brutal visuals quite graphically depicted. There is offensive language, brief sex scenes and implied rape; overall, expect a gory movie with few, if any, redeeming qualities (literally or figuratively).
My Ratings: Moral rating: Very Offensive / Moviemaking quality: 3

Diana Brushey, age 31
Comments from young people
Neutral—I have not viewed this film, nor do I plan to, based on my own moral convictions. It’s what you get with this type of genre, despite the actors in it, or the interesting locales and plot. I wanted to send this comment in based on the writings of the reviewer. All in all, it was a good review from the standpoint of a Christian worldview, and you have the ability to warn other discerning Christians about a film’s moral pitfalls. Regardless of whether I was going to see it or not, my one and only complaint lies on the fact that you’ve given the end of the film away, with no warning. I suggest that next time you be a little more careful. But otherwise, well done.
My Ratings: Moral rating: Offensive / Moviemaking quality: 3