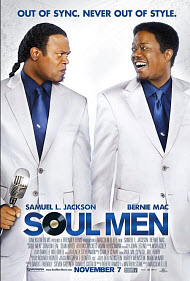 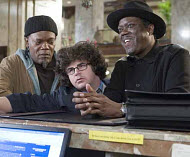 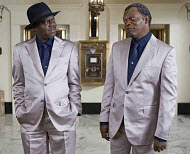 “Out of sync. Never out of style.”

Before there were pop boy bands, there were soul men like The Chi-lites, The Delfonics, Four Tops and Temptations. Director Malcolm Lee’s comedy “Soul Men,” takes audiences for a nostalgic trip down music memory lane as the former musical stars and now senior citizens Henderson and Hinds attempt a musical comeback after more than 20 years. Starring the late Bernie Mac, with his acerbic and sardonic comedic style, as Floyd Henderson and Samuel L. Jackson as a bitter Louis Hinds, this trip is a rough ride overrun by profanity-laced dialogue, heavy violence and sexuality.

Despite their hatred of one another, Henderson and Hinds unite to perform at a memorial service. On route to the service, they relive their tour days by performing at local dive clubs, hooking up with female groupies and fighting with each other. Of course, they encounter several obstacles before getting to the memorial service, which force them to become more of a team and help them resolve their personal issues with each other.

Within the first few minutes of the film, the barrage of profanity begins and doesn't relent for the entire movie. The dialogue is not only profane, but verbally abusive, caustic and overall truculent. A key source of the comedy is derived from Henderson and Hinds insulting one another with combative, curse-filled language. In the midst of this onslaught of foul language, the Lord's name is taken in vain and characters spar with racial insults. Sexuality, nudity and violence are also used to elicit laughter.

Henderson and Hinds are a volatile pair who don't agree on much of anything except their disdain for one another and their mutual love for their former lead singer whom both of them married. The Bible provides a guide for resolving grievances in Matthew 18:15-17. Jesus tells his disciples that if your brother sins against you, go and tell him his fault alone, one-on-one. If he refuses to hear you, then take one or two more witnesses. If he continues to resist, tell it to the church. Finally, if he refuses to hear the church, “you'll have to start over from scratch, confront him with the need for repentance, and offer again God's forgiving love” (The Message Bible). But the lesson doesn't stop there. When Peter asks how many times should you forgive your brother, up to seven times? Jesus responds, “70 times seven” (Matthew 18:21-35).

Henderson and Hinds learning to forgive each other is the only redeeming factor in this comedy with predictable scenarios and dirty talk. I found this picture to be extremely offensive throughout, with profanity as the key punch-line to most of the jokes. I cannot recommend this movie for the crude humor, foul language, fornication and nudity.