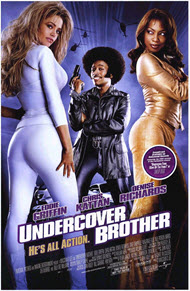 For everyone who experienced it, the 70s was a very unique time in our history. We were struggling through the consequences of the Vietnam War, Watergate shook the foundation of our political confidence, and we observed the transition from LPs to cassettes and 8-track tapes. The music of these times was very expressive and explored the borders of rock, metal, pop, disco and of course funk.

Several films have tried to relive this era. “Undercover Brother” is another attempt to put a spin on big Afro-hairdos, platform shoes and of course polyester disco shirts. I know that Universal Studios is hoping to discover the success of the “Austin Powers” series and give it a “soulful” spin. Eddie Griffin plays our James Brown Bond in snakeskin leather trousers. He is trying to bring the John Ridley (The Three Kings) Internet cartoon to life. (Hollywood seems to be always trying to build a film around some successful stand up comedian.)

I did like some aspects of our Shaft-like Robin Hood. The sight gags were for the most part far more entertaining than films like “Kung-Pow”. If you grew up in the 70’s—you’ll appreciate them even more. Our Undercover Brother is noticed and recruited by a super-secret organization called B.R.O.T.H.E.R.H.O.O.D. who are battling behind the scenes against their arch villain “The Man.” The Man (Robert Trumbull) is trying to eliminate the “soul” of all Afro-Americans and cause them to blend in. He is assisted by his right hand man, known as Mr. Feather (Chris Katan). Their primary concern is a popular Black political figure named General Boutwell (Billy Dee Williams). Just as he is about to launch his candidacy for President, the General is brainwashed and opens a chain of fried chicken restaurants instead.

The Man is determined to keep “the White House white.” This grave matter comes to the attention of the B.R.O.T.H.E.R.H.O.O.D. and they begin an investigation. The team of Smart Brother (Gary Anthony Williams), Sistah Girl (Aunjanue Ellis), and Conspiracy Brother (Dave Chappelle) is led by the Chief (Chi McBride). Together they try to piece together the evidence and find a solution to this challenging dilemma.

But it is decided that the organization needs new blood, leading to Undercover Brother’s recruitment. He begins to infiltrate The Man’s organization and is seduced by White She Devil (Denise Richards). Her cover as the sweet and innocent Penelope Snow blinds our Brother. It isn’t long before Undercover Brother is wearing plaid pants and eating sandwiches on white bread with white mayo. They even sing “Ebony and Ivory” as a karaoke duet.

Most of this film is slick and, of course, very cheesy. It does earn it’s PG-13 rating. There are sprinkles of offensive language. There are also some scenes of implied pre-marital sex, a voyeuristic cat-fight between White She Devil and Sistah Girl, and a rather steamy shower taken by the two ladies. I would compare the presence of this material similar to most Bond-flics.

There are portions of this film that will make you smile as efforts are made to keep the world “a funky place.” There are other parts that will make most Christians wince and say, “Now that wasn’t necessary.” While I liked some of the film, I would not pay full price for it nor can I recommend it. My suggestion once again is to wait for the rent and use the remote if this one appeals to you at all.

Positive
Positive—I saw this opening weekend with a good friend of mine and both of us were curious as to what type of movie it would be. I was very concerned that it would be a very anti-white movie, but was pleasantly surprised in the display of unity it presented. The fight scene in the shower was too much and totally unnecessary and is the main reason the moral rating is poor. Not only does it show women as merely sex objects, but the lesbian connotations clearly violate Romans.

Other than that, it is a pretty clean movie with little language and very cartoonish violence. It is a spoof of old 70’s-ish movies and is much cleaner than any of the Austin Powers movies which this is similar to. To sum up, I was very pleasantly surprised by the quality of the movie. Adults would enjoy it, but children and young teens should not be allowed to see it.
My Ratings: [Average / 3½]

Josh Simmons, age 21
Neutral
Neutral—“Undercover Brother” is a very well done “blaxploitation” movie (if that’s a real word.) that refuses to take itself too seriously. The producers realize that they are, in a way, spoofing itself and thus has the freedom to take creative licence with some unrealistic gags. The pace of the movie is quick and witty. I found myself laughing out loud several times at equal portions of “white” jokes and “black” jokes. While the film deliberately stereotypes both Caucasions and African Americans, I would be hard pressed to find anything that you could be ethnically offended by.

The language, on the other hand, kinda threw me off including a resounding “F” word that was completely uncalled for. There is also a smattering of pre-marital sexual innuendos. If you take offense to such things, save your money. Personally, I have a tolerance to these things… to a point. Thus, I feel I got my $7 worth of entertainment. However, those easily offended by coarse language and “campy” sexuality, wait until it comes on network television.
My Ratings: [Average / 4]

Scott Foster, age 31
Negative
Negative—Do NOT let even young teens see this movie. I went to see it because my child was taken to see it with a couple of friends and she was very uncomfortable watching it but could not leave. I counted over 20 LOUD uses of the “A” word, one saying, I would have pulled it out his “A”. Over 20 LOUD “S” words and one loud use of the “F” word. I really think they used about ever cuss word there is.

Sexual humor was awful and in a response to saying “the black man had sex with a white woman,” one asked if she had “pink ??,” one of the parts of a woman’s breast used in nursing. This should have been an R-rated movie!

DDH
Comments from young people
Positive—It was so funny and not that bad. I actually thought it was not that much for me. It was okay.
My Ratings: [Average / 3½]

Sheeva Orlando, age 12
Movie Critics
…Two women fight, end up tearing off pieces of each other’s clothing, they end up in a shower stall getting sprayed with water, they rub themselves and each other and nearly kiss while three men watch eagerly…

Kids-in-Mind
…Various instances of sexually related dialogue and innuendo are present, it’s implied that a couple that’s just met has had sex, a woman briefly responds in an aroused/orgasmic fashion to verbal innuendo a man delivers…