for some sequences of violence and language. 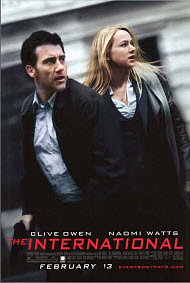 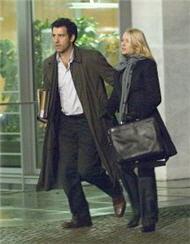 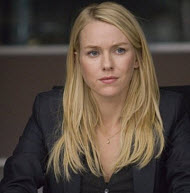 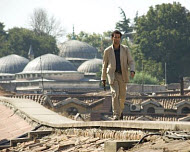 When the film makers of “The International” started filming they couldn’t have imagined that their movie, a part actioner/part adult drama about the criminal actions of an international bank, would be released during such a crucial financial downturn in our nation’s economy. The results of these unfortunate times on this particular film are twofold. First of all, it will possibly make this film more accessible to others who may want to see a movie about a topic that is politically relevant. Conversely, however, it also lends less credibility to the plot of the film which is based loosely on a true story about a bank who tried to monitor weapons sales to third world countries in order to control the debts of any third world crisis. If the plot sounds convoluted, that’s because it is, and while a top notch cast and an incredible action set piece do their best to save the film, “The International” never really rises above a muddling, mediocre attempt at a sophisticated thriller.

Clive Owen plays Louis Salinger, a former British agent of Scotland Yard turned Interpol agent who borders on obsessive when it comes to bringing down one of the world’s largest banks. He works with others from various government agencies across the globe, most closely with FBI agent Eleanor Whitman played by Naomi Watts. Together they’ve come close many times to finding an insider willing to testify against the bank, but every time their informant winds up dead. Their travails lead them globetrotting across Europe and North America in effort to bring the bank to justice.

The highlights are the cast, specifically Owen and Watts, playing their roles with gravitas and elegance. Also, “The International” boasts an outstanding action set piece that takes place in the Guggenheim Museum in New York City. The scene lasts around 15 minutes and will be a big hit with action fans, who, coincidentally, will probably find the rest of the movie a bit tedious and boring. And that’s really one of the big problems with the film. Along with a murky, constantly wandering plot, the film really doesn’t settle into a specific genre, and never really satisfies on any level.

From a Christian viewer’s standpoint, the film has average R-rated content. There is language throughout, and, while it’s not gratuitous, there are enough uses of the F-word for some viewers to become uncomfortable. The violence is held to a minimum until the big action scene mentioned in the paragraph above. During that scene, the action is very realistic, and killings are shown up close, along with the blood caused by said killings.

The one big positive I found in the film was in the character of the protagonist, Louis Salinger. Salinger doesn’t care about fame, fortune, or revenge. He is no more than a seeker of absolute truth and justice. It’s with this vigilance that the Christian viewer can be reminded of the resolve it takes to continually stand for truth when the world falters and falls around you. While that’s a great lesson, it’s also one that’s enveloped in a mediocre film that really isn’t completely accessible or made for anyone in particular. Ultimately disappointing, “The International” is a film you could skip and have never missed a thing.

Positive
Positive—Loved the movie… on the edge of my seat the whole time… what a movie to be playing at the perfect time in history… so timely.
My Ratings: Moral rating: Very Offensive / Moviemaking quality: 4½

Tony Andrews, age 45 (Canada)
Positive—After hearing bad reviews about “The International” I was a little hesitant to see it, but I am a huge fan of Clive Owen and decided to go against the tide and watch it (I did wait for the DVD release though). I am sure glad I did. All the performances are good, especially Owen and Watts, who have a good chemistry and play like they’ve really known eachother for a long time. They’re believable. The pace of the film, which many complained about, actually is very fitting.

This isn’t the average shoot-'em-up, run-around-and-scream-alot thriller, “The International” takes its time to really build a plot and give time to its characters. It may seem slow and boring, but that’s only if you expect the run-of-the-mill thriller, but I was forewarned. There is some action and violence (which was bloodier than I expected, but restrained), language is to be expected and other morally offensive material--but if you can just sit and watch a movie that bides its time to tell a story and genuinely make you think--than I most certainly recommend "The International".

If you like a faster, brighter and more explosive ride, this in definitely not the film for you. A good thriller that beat the stereotype.
My Ratings: Moral rating: Offensive / Moviemaking quality: 4

Benjamin Badger, age 18 (USA)
Neutral
Neutral—I’m commenting on the preview that was before the movie when I rented this film. The movie it self was good. However, my concern is before this movie played, it had a preview for a new movie coming out (don’t know the name, had Kim Bassinger in it and was about breaking into “Hollywood”). It showed complete nudity, and I would call it porn, as far as I’m concerned! One women with two men and completely nude, it did not show just one scene, but scene, after scene, after scene! How could this happen and what can we do so that our voices are heard? They are pushing the envelope here, we need to SPEaK out!
My Ratings: Moral rating: Average / Moviemaking quality: 2

Wendy F, age 31 (USA)
Negative
Negative—The plot was intriguing, and there was a fresh angle on terroism; however, it switched from a cerebral soft-thriller to an action movie too quickly. The overuse of strong language always dampens my enjoyment, but it is R and was expected. The camera work was well done. The acting commendable. For those who enjoyed the Bourne movies, this one will be of interest. The theme of seeking justice is strong, and there is discussion about how the pursuit of justice can easily become a personal vendetta. The ending delivers the actuality of how injustice continues on, although there is a glimpse of how one person’s diligence begins making a difference.
My Ratings: Moral rating: Offensive / Moviemaking quality: 3½