for some mild thematic elements and rude humor. 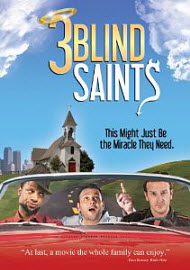 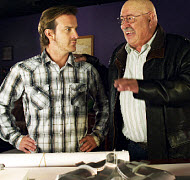 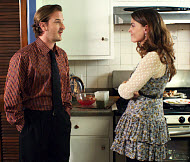 “This might just be the miracle they need. It took pretending to become real.”

I was looking forward to watching “3 Blind Saints,” mostly because of Richard Speight Jr. I had seen some of his work in television and was interested in seeing how he was in a Christian themed movie. When I watched the preview to this movie, I wasn’t sure if it really was a Christian movie, but I rented it anyway. During the first 20 minutes or so, I STILL wasn’t sure if it was a Christian movie. I thought it might be out to mock the Christian faith, such as “Saved!” (which this reviewer has not seen more than a few minutes). Rest assured, it IS a Christian comedy.

Sam (Richard Speight Jr.), Jamal (Elijah Rock) and Frankie (Stelio Savante) are friends with no real purpose in life. As they are cruising along in Sam’s car, Frankie wants to stop to visit a palm reader in the town of Rocky Road. Sam lumps God in with things such as fortune tellers and vampires and calls it all hocus pocus, illogical and superstitious but he stops the car for Frankie to run in. While double-parked, a police officer comes over. Sam is able to talk his way out of a ticket, until Frankie tosses a bottle out of the car that hits the police officer. The three friends end up in jail. Jamal comes up with the idea to tell the judge they all got saved while in prison, in hopes of avoiding further jail time.

When they go before the judge, professing their newfound faith, a town member, Rusty Pickens (Barry Corbin), recognizes the men as perfect patsies for his church-based scheme and talks the judge into releasing the men to his care where they can serve the church. The men agree to the three week job, thrilled with their newfound freedom, living accommodations at the church parsonage and weekly income. However, when it comes time for Frankie to actually teach the Youth Group and for Jamal to lead the choir and Sam to preach Sunday sermons, the men are completely inept. Faking it turns out to not be so easy for the men.

The film centers around Sam coming face to face with the truth of God and realizing he is no longer able to lie about who he is. He states “I can’t sell religion.” While contemplating what he should do, he accidentally gets electrocuted and has an encounter with God. While in this dream-like state, God cracks a few jokes to a laugh track in the background. In Sam’s conversion, there is no repentance of sins, no asking for forgiveness or recognition of Christ as savior.

It was more or less a bizarre attempt at a comical exchange with God, and Sam waking up as if “Oh, ok I believe now.” Yet the Bible does assure us,

“And it shall come to pass that everyone who calls upon the name of the Lord shall be saved.” (Acts 2:21)

“And it shall come to pass that whoever calls on the name of the LORD Shall be saved.” (Joel 2:32)

So where this is a light-hearted approach, salvation is there for all who call upon God.

This movie had potential. I love to see quality Christian films, but this one really fell short. Things moved way too fast, there was not enough character development, and Sam’s sudden conversion to Christianity was too watered down. I understand making it light-hearted—not every Christian movie has to be heavy-handed or doomsday, but I was really disappointed by this one. I did not laugh at any jokes or humor of the movie—it just wasn’t funny. When Jamal has a cousin stop in to the church to help with the song service, all of a sudden people jump up doing a choreographed routine and the once tone deaf choir miraculously sings wonderfully. When Frankie tries to work with the youth, he is helpless, but again, without any character development, we see all the teens enter the church greeting Frankie like an old pal with hugs and pats on the arm.

Objectionable content: There is no foul language, and the only instance of violence is a slap stick type of kidnapping of Frankie. There is an odd scene where Jamal and Sam dress up as women and dance for Rusty Pickens to fool him into getting Frankie back. While this can be seen as comical, it’s an odd scene that could have worked without them having to dance while Rusty sat and watched with a smile on his face. I would have liked that scene better if they, perhaps, while dressed in costume as women, they had dinner together and had gotten Rusty to talk by seeming interested in his every word.

Positive Elements: There is the message of forgiveness and turning away from sin and toward God. When Sam is met with a real instance of a parishioner needing him to pray for her sick son, he recognizes his need for God. Sam also makes the right choice when he learns of Rusty Pickens embezzlement of church funds.

In the end, unfortunately, I have to recommend you skip this movie, simply because it is lacking in quality. If you are looking for a Christian film, there are others out there that are better choices, just take the time to look around.