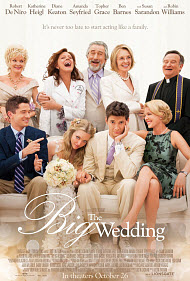 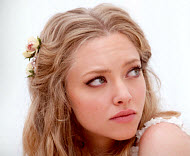 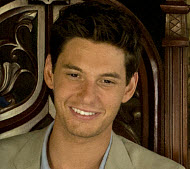 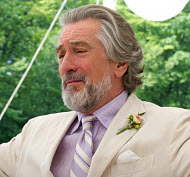 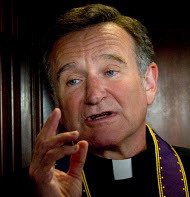 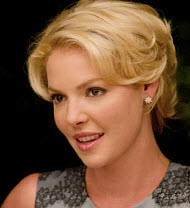 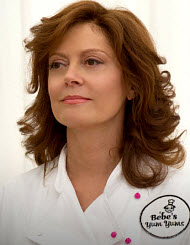 “It’s never too late to start acting like a family.”

At first glance at the lush movie poster, one might guess that “The Big Wedding” is a hilarious romantic comedy fueled by high-octane actors… something good for a date night. However, the lingering bad taste left in your mouth as you leave the theater more resembles rocket fuel than the all the star-power in this film can muster. Kept neatly within the bounds of beautiful scenery and glamorous people surrounded by white twinkle lights and chinking champagne glasses is a very sad world. There is a seemingly happy ending of two marriages taking place that punctuates the film’s initial marital-related pessimism. Yet, there remains, just as the river swirls around the main character’s seemingly stable family home, a pathetic undercurrent of flawed reasoning that undercuts their artificial happiness, no matter how smooth the surface of the water appears.

The movie valiantly attempts to show depth in the relationships between the many characters, but always falls short. The audience doesn’t ever quite believe that these people all really love each other, due to the film’s hollow lack of understanding of where the glue that binds relationships comes from. The movie’s characters all leave staying together to chance or fate—not effort or dedication, and certainly not due to sharing convictions or a semblance of faith.

It all begins as we see the wedding preparations of Alejandro and Missy unfolding over the predictably bumpy underpinnings of their emotional, dysfunctional families. The family antics provide much of the comic relief, as it is intended for Father Monaghan to do (Robin Williams reprising his role as a priest slash marital counselor that he originated in “License to Wed”). Sadly, all of his one-liners, though sharp and succeeding as direct hits to the particular character he is trying to pierce at the moment, are all at the expense of anyone of faith—Catholic or Protestant. For instance, in counseling he asks Alejandro and Missy if they are planning on raising their children as Catholics. When they reply that they are planning on just waiting until the children are old enough to decide for themselves whether to believe in God or not, Father Monaghan audibly jots on his form, “Oh, hell, it is then. …” This clearly is depicted to be outlandish, as are the other religious inflections that his character, if adding genuinely, might be lauded for.

The plot revolves loosely around the idea that though Don (Robert De Niro) and Ellie (Diane Keaton are divorced and Don has been living with Bebe (Susan Sarandon) for several years, Ellie and Don must pretend to be married in order to hide their divorce from Madonna (Patricia Rae) who is coming for the wedding to meet the family.

Madonna is continually a source of humor for her “ridiculous” belief that divorce is “a big bad sin.” Here is where the plot gets tricky, creating awkward situations for comedic purposes. Madonna is the biological mother of Alejandro, Ellie and Don’s adopted son, and she is coming from Columbia for the wedding festivities. Bebe is insulted that she doesn’t have a place in her “family,” and Ellie entertains feelings for her former husband, Don. To further complicate things, Missy’s parents also have romantic connections to Ellie and Don. Don and Ellie’s other children have romantic entanglements of their own to throw into the romp through the worldly structuring of relationships… i.e., who has slept with whom, who is currently sleeping with whom, who wants to be sleeping with whom, who “should” be with whom, and on and on.

Shockingly, there is a romantic attraction between Alejandro’s biological sister, Nuria, and his adopted brother, Jared (Topher Grace). Lyla (Katherine Heigl) is Don and Ellie’s daughter, and she is not without her own romantic problems. The plot twists and turns on the axis of sex throughout, basically in the tradition of Shakespeare’s sex comedies, but without the redeeming qualities of his plays, adding unnecessary foul language that litters up the otherwise quite witty script and stuffs in other worldly trappings in order to earn an “R” rating.

In the introductory narration of the movie, Don says, “You know what they say… Marriage is like a phone call in the night. A ring and then you wake up…” inferring that marriage is only happy until you “wise up.” Though this sentiment is seemingly uprooted by his decision to remarry at the end of the movie, you get the feeling that none of the marriages forged in this film’s plot would possibly last to a sequel… Not that there would be enough fodder for a story to possibly be milked out of these tired characters for a future movie.

Is formalized marriage becoming obsolete? Answer
(Some people are convinced that traditional marriages don’t work and that this practice should be abandoned. What does the Bible say about marriage?)

Of course, the ensemble cast of actors are all quite expert at playing the characters they are known and loved for. Heigl is the neurotic but brilliant woman hiding her true feelings from others and suffering for it until the end. Williams is the full-of-wit comedy actor with surprising wisdom buried in his antics. Sarandon and Keaton are older, sexually experienced women who view themselves as sophisticated and elegant. De Niro is the charming but craggy, recovering alcoholic womanizer that expresses his hidden softness of heart in sculptural art, much like his closet ceramics artist slash cop character in “Showtime.” Grace is the boyish, brainy guy who gets seduced into a relationship over his head.

This film gets its “R” rating for a smattering of every profanity and curse—a dozen “f” words and all the rest lagging behind them, a woman spontaneously skinny-dipping with few camera cuts, and a constant barrage of sexually sensitive situations.

The characters mock religion, make racial remarks for cheap laughs, make fun of a virginal person, and pull-apart the sanctity of marriage with callous remarks and rampant adulteries, that in the conclusion are mostly considered justified. The ending is “happy” when the certain characters that “should” be lied to are kept locked into believing those lies and the “right” people have gotten together in the same bed. None of the characters learn from their mistakes and none learn how to make a lasting, fully-realized, glowing relationship of peace that has any grounding whatsoever. As expressed by Don’s raised eyebrows and sad eyes when asked if he believes that Missy and Alejandro will “love each other enough to be happy forever”—even though he says “yes,” he is expressing a clear “no”—love is viewed as a fickle, mysterious beast that one is only able to chain temporarily with more sexuality than the competition.

LUST—What does the Bible say? Answer
(the naked truth about lust)

Negative
Negative—This movie is rated R for very good reasons. All those outstanding and accomplished actors put in good performances. The script is written fairly well. But, oh, the content. It is salacious and sleazy from beginning to end. One sexually immoral act or word after another, with profanity scattered here and there. What a sad, sad world this movie portrays, and, alarmingly, it really does reflect our Godless society. It depicts disregard for the sanctity of marriage and of sexuality. There is no holiness, no spiritual life, no depth, not even normal emotional development.