for sexual humor and language. 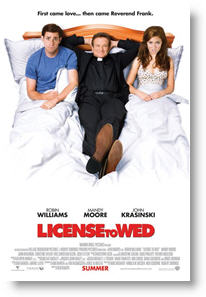 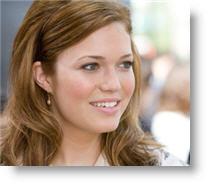 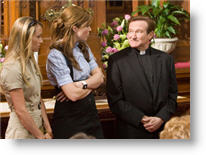 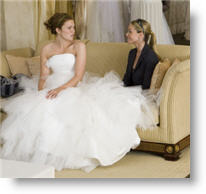 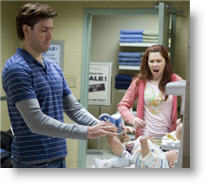 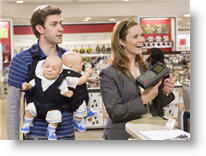 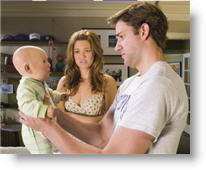 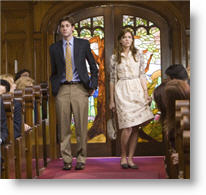 Is formalized marriage becoming obsolete? Answer
Some people say that traditional marriages don’t work and that this practice should be abandoned. What does the Bible say about marriage?

Here’s what the distributor says about their film: “Newly engaged Ben Murphy and his fiancée, Sadie Jones, plan to live happily ever after. The problem is that Sadie’s family church, St. Augustine’s, is run by Reverend Frank, who won’t bless Ben and Sadie’s union until they pass his patented, ‘foolproof’ marriage-prep course. Consisting of outrageous classes, outlandish homework assignments and some outright invasion of privacy, Reverend Frank’s rigorous curriculum puts Ben and Sadie’s relationship to the test. Forget happily ever after—do they even have what it takes to make it to the altar?”

Sadie (Mandy Moore) and Ben (John Krasinski) meet unexpectedly. They click instantly and, through the first few moments of their relationship we watch months pass as their love blossoms and takes what society considers the normal steps… They kiss, then soon sex follows. Eventually they move in together and THEN the proposal comes.

Because Sadie has dreamt of being married in the church rich with family history, Ben concedes and agrees to go with her to meet Reverend Frank (Robin Williams). The only way the Good Reverend will agree to marry them is for the couple to consent to taking his marital training course. If they pass a series of tests, he will then conduct the ceremony. He gives them the choice between a wedding day which is three weeks away, and one which is two years away. Sadie eagerly grabs at the date which is three weeks away, and Ben reluctantly follows because he loves her.

Let me start out be pointing out that this is not a film for believers who are easily offended, or parents hoping to treat their kids to an afternoon at the movies.

This movie could have been more. Part of the ingredients were there, with a solid cast and delightful little cameos of other “The Office” cast members (for those of us who are fans of the U.S. Version). There are things which, at times, seem to work but then that minute passes and we are once again in the throes of a fairly bad movie.

If you are fans of any members of the cast however, it isn’t a total loss. Though not as funny as it should be, there are laughs to be had. I recommend, however, waiting until its DVD release.

Positive—I really enjoyed the movie. The cast is very appealing and likeable, and there is much laughter to be had. As far as objectionable content, there was a scene where sex is discussed, and a handful of cuss words, but it was actually much cleaner than a lot of PG-13 movies out today. I’d recommend it for teens and above.
My Ratings: Average / 4

Dustin, age 19
Positive—I loved the movie “License to Wed.” It was funny and I believe the movie values the sacredness of marriage as it strongly suggest that couples need more than just the desire to be married to make their marriage work but that they also need to understand the complexity of this intimate union. While Rev. Frank (clearly a protestant clergy person) is not perfect and (Robin Williams) is quite a bit over the top in his attempt in teaching the 10 commandments to youth and providing pre-marital instruction to the couple. He works on issues of communication, family of origin, finances, fair fighting, stress, making promises, sex and parenting. The couple is not sure that they need this pre-marital work because they are “in love,” but the wise pastor insists. As a pastor, that also insists on pre-marital counseling I find this dynamic to be very real.

We are told that Rev. Frank is “everywhere.” The film has him “going too far”—bugging the couple’s conversation. But I almost think that was a metaphor for the fact that many pre-marital couples feel that you “know” them very well and are almost able predict how they will react or respond to certain stimuli. One couple even asked me if I was with them when they had a fight about a couple issue that we were working on in our traditional 1 hour office visit. They were not sure how I knew.

I am an ELCA Pastor, a Licensed Marriage and Family Therapist and a Marriage Educator and I found my self, laughing out loud with the audience at many of Robin Williams antics. I came expecting Williams to be “Irreverent,” and he was he was, and yet he was funny. I did not feel he was making a mockery of what I hold sacred but that he was holding it up and asking me as a person of faith to look again and to really know what it is that I believe and hold dear. He did this not by preaching but through humor. There was one scene where he wanted to meet with the couple right after Sunday Services, and they came running into the church service half way through the service and (Williams) Rev. Frank interrupted his prayer and made remarks about their lateness (something that I wish I cold do) but he reminded the couple that even though they were late to the service that God still loved them. That was beautiful!

I think couples who are dating and thinking of marriage should definitely see the film and understand how important it is for Pre-marital counseling or education—no not Pastor Franks advance three week course, but your pastor’s or therapist regular program of pre-marital education to get you thinking, talking and recognizing your vulnerabilities as you enter this sacred union. The program is to help couples enter into the relationship vitalized and with eyes open ready to make a commitment for as long as they both shall live.
My Ratings: Better than Average / 5

Rev. Dr. Dolores E. Littleton, LMFT, age 52
Neutral
Neutral—I went to the movie with the idea that the film makers were going to make fun of us christians. But with the selection of movies at this time it was the best of the bad movies out there. Well, as I did not feel attacked, I did not enjoy the movie as much as I would have liked. The part about laughing about “Hell” I really did not care for. “Hell” is not a laughing matter in my book. I laughed about the babies and Robin getting caught snooping but I did not roll on the floor laughing. I should have waited till the DVD came out.
My Ratings: Average / 3

H. Shorten, age 40
Comments from young people
Neutral—“License to Wed” had me laughing crazily throughout the whole thing. I enjoyed this movie very much. I rated it neutral, because although I enjoyed it, there were many un-Biblical parts.
1. They show them moving into each others’ home as if living together is something everyone does before they are married.
2. talks about sex VERY openly… they have a 5 minute conversation.
This movie may not be appropriate for someone under 14, although if you can distinguish right from wrong, then it is okay to see.
My Ratings: Extremely Offensive / 3