for some violence, sexual references, language, thematic elements and smoking. 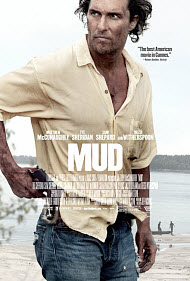 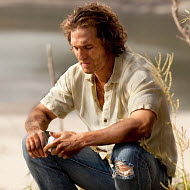 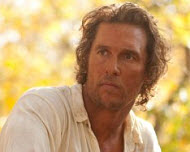 “Mud” is a combination of two very different things. Pure, clear, water mixing with miry, earthy terrain creates this mixture. Mud is useful, moldable, and sometimes even necessary, while also causing a mess. The film “Mud” is a lot like the substance itself: a combination of the dirty depravity of man and the purity of unconditional love.

Ellis and Neckbone are best friends (yes, you read that right; one character’s name is Neckbone, or “neck” for short. It’s that kind of movie). Growing up in southern Arkansas, Ellis and Neck do everything together: sail down the river, get into trouble, and even sell fish out of the back of Ellis’ dad’s truck. They probably spend so much time together because their family lives aren’t much to speak of: Neckbone lives with his womanizing uncle, while Ellis has a mom and dad who love him but are on the verge of divorce.

On one sailing excursion, the two boys decide to go out to an island on the river that contains what appears to be an abandoned boat. While they find the boat, they also find an estranged man living inside it. He’s got tattoos on his arms, crosses on the soles of his shoes, and folks call him Mud.

While the boys should immediately run and stay away from the stranger, they are drawn to Mud. They find a man so interesting and mysterious that they spend more time with him. He has entertaining stories, and he’s on a mission to recapture the love of his life: the lovely Juniper. Mud enlists Ellis and Neck to help him win her back. Through various twists and turns, the boys learn that there’s more to Mud than meets the eye while also learning a few valuable lessons along the way.

“Mud” is a coming of age story that is Southern-fried to perfection. While watching the film, I couldn’t help but feel like the great Mark Twain had come back to life to write a screenplay. It’s filled with pitch perfect dialog and beautiful scenery of southern Arkansas. The acting is excellent across the board. Matthew McConaughey, who is not necessarily known for his acting ability, delivers the performance of his career as the titular character. Not to be outdone, acting newcomers Tye Sheridan and Jacob Lofland are both incredible as Ellis and Neckbone. Not a single scene feels artificial, and these two leads bring great authenticity to the story.

The reason the film works on multiple levels is because of writer/director Jeff Nichols. Nichols is no stranger to using symbolism in film, which is evidenced by his previous work, specifically the excellent “Take Shelter”. In “Mud”, he successfully uses the locale of southern Arkansas to move the film at its own distinct, deliberate pace. It feels less like a movie and more like a page-turning novel. Nichols also writes and directs in a way that gives the film pathos. “Mud” is littered with positive messages of friendship, self-sacrifice, and unconditional love.

The realism of the film does result in some content issues that make “Mud” a film for adults only. The two teen leads both use profanity from start to finish. While this is an accurate depiction of character acting, it does not serve as a positive example for teens to follow. Along with the language, there are several moments of violence, as well as some inappropriate sexual dialog.

Above all, “Mud” is a story about life: a moldable mixture of purity and impure depravity. It adroitly depicts imperfect humanity longing for something better than the muck and mire they have created. Deep, emotional, and exceptionally well made, “Mud” gives the discerning viewer plenty to muse on while also being, in my opinion, the best film of the year by far, so far.

Comments below:
Neutral
Neutral—At first, I liked this movie. It was an interesting insight into the lives of different people. However, when it showed a murderous vindictive person praying before having his men go out to kill, it was putting Christianity in a bad light, which unfortunately is often what is typical in Hollywood movies and the news. There always has to be a negative slant concerning Christians lately, and this part of the movie, although brief, put me off. The rest was OK though and good acting.
My Ratings: Moral rating: Average / Moviemaking quality: 4

Jan Espinosa, age 60 (USA)
Negative
Negative—This movie violates the 3rd Commandment. Also, young boys about 12 using vulgar language frequently. Nasty talking also. I thought Matthew was raised in a Christian home from the way he talked about his mother. But, then again he did have a child out of wedlock.
My Ratings: Moral rating: Extremely Offensive / Moviemaking quality: 3

Bobbie, age 48 (USA)
Movie Critics
…shines as a coming-of-age tale… The performances are outstanding… [A-]

Adam Graham, The Detroit News
… it assures us that young boys spitting profanities is as common as catfish in the shallows. …Adults talking crudely about the sexual side of life? Well, hearin’ that is just part of growin’ up too. …

Bob Hoose, Plugged In
…the story and characters are well done, with some positive content, but the movie is a little too long and contains enough negative content to require extreme caution. … [3½/4]

Steven Rea, Philadelphia Inquirer
…The movie’s title implies McConaughey will be the central character, but this is really a coming-of-age story that sneaks up on you. … [3/4]

Claudia Puig, USA Today
…If you're looking for the best movie of the year so far, its name is “Mud.”…