for drug use throughout, sexual content, graphic nudity, language and some violence. 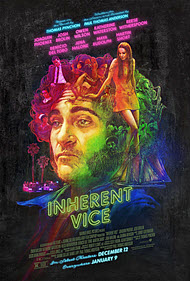 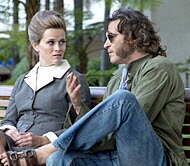 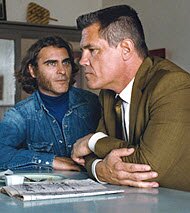 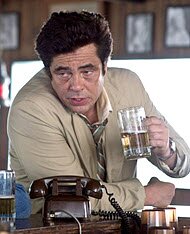 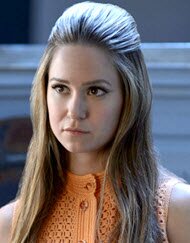 Inherent Vice—A hidden defect (or the very nature of) of a good or property which of itself is the cause of (or contributes to) its deterioration, damage, or wastage. Such characteristics or defects make the item an unacceptable risk to a carrier or insurer.

Joaquin Phoenix (“Gladiator,” “Walk the Line”) is Larry “Doc” Sportello, a private investigator who relies as much on marijuana for his investigatory powers as he does on his natural wit and connective thinking. He is approached by his ex-girlfriend, Shasta Fay Hepworth, played by Katherine Waterston (“Boardwalk Empire”), to look into a supposed plot to kidnap her billionaire lover Mickey Wolfmann (Eric Roberts). She believes Wolfmann’s wife and her spiritual coach are planning the abduction to steal his fortune.

Doc accepts the case, partly because of the fact he’s still in love with her. As he starts his investigation, he is hired by a couple other people—an ex-con who seeks one of Wolfmann’s bodyguards, who he met in prison and owes him money, and also by Hope Harlingen, an ex-heroin addict who is looking for her husband, a saxophone player who has disappeared.

As Doc investigates, he discovers links between all of them, leading to a conclusion that even his hallucinating brain didn’t expect. His main opposition is Lt. Det. Christian F. “Bigfoot” Bjornsen (Josh Brolin), who, on the surface is a straight-laced, hard-lined cop who hates hippies and all they stand for.

This is a huge dilemma of a film. It’s set in the 1970s, the era of the hippies, of free love, and many experimental drugs. Doc Sportello is a hippie, and his P.I. practice is looked down upon, in particular by the L.A.P.D., who feel he is a joke, despite his apparent successes. Because it’s set in this time period, the director Paul Thomas Anderson (“Magnolia,” “The Master”), extorts every inch of 70s hippie dialog, California beach culture and hard-lined extremist gang groups behavior into the film. If you grew up, or lived through this period, a lot of the jokes, reactions, and dialog will resonate with you on a whole other level than it did with me. Most of the viewers laughing in the theater were in their 50s or older.

It’s such a well-directed film. The cinematography is sublime, the soundtrack is clever and all time-appropriate. There are some humorous moments (it is meant to be a comedy), mostly from Doc, as his reactions and one-line responses are cleverly done. The acting is superb from Joaquin Phoenix, and the dialog is catchy and has a real taste of improvisation about it.

However, it’s a muddle, unless you can follow through the haze of pot smoke, confusing storyline, and characters seemingly on an all time high. I am partially convinced that it was the director’s aim to give it this feel, almost to force you to question your own brain and how it makes sense of the investigation. If this is meant, he did it brilliantly. You can see why I’m split with “Inherent Vice.”

The other thing for viewers to consider is how inherent vice is key enough to make it the title of the film. Inherent vice is defined at the top of my review, and I believe there are many areas that fall under that definition. Firstly, there is the marijuana. It’s smoked so constantly, you wonder how blatantly it is affecting Doc’s investigation techniques. The desire for drugs is so strong for many characters, and it leads many to heartbreaking situations.

The other inherent vice is love. Not something many people would agree with, but for Doc and his friends, it seems true love is almost not worth dealing with, as it can damage a person to the point where the risk isn’t worth it anymore. This is evident in Doc and Shasta’s relationship. They can’t commit to each other, but will not break apart.

Sex and Vulgar Language: There is plenty of colorful language. 100+ uses of swearing. There are 3 scenes of a highly sexual nature, a sex scene, two women performing a sex act on each other, full frontal female nudity, and several items of clothing, and a mural, that portray fully naked portraits of women.

Violence: Doc gets beaten up, and hit in the head. There is blood, and there are fights. As I’ve already stated, the copious amounts of drugs smoked or taken are uncountable. Pot and PCP is smoked, cocaine snorted, and heroin injected (in a still photograph).

Depth is not lacking in this film. The story is clever, once you’ve swept away the smoke haze, and the mystery is actually quite intriguing. It’s just the sheer lack of drive, the shallowness of the characters in their desperate states. Whether it’s the corrupt cops, the drug-addled youngsters, the lonely desperation of the older generation, or the lack of success from those turning their lives around and wanting to make a difference, it just never feels complete.

That’s so evident as someone who is full because of Jesus. Christians who live on God’s fullness can spot emptiness in a heart, and this film is full of it. If you’re looking for a funny, light-hearted comedy with a touch of intrigue, and solid, simple characters, this is not the film for you. If you’re looking for a family film, this is certainly not a film for you. If you’re looking to send your teenagers out to watch a film, this is NOT the film to pick. Despite the hopelessness and desperation depicted in “Inherent Vice,” it does carry the lure and temptation of the “lifestyle.”

Be very aware. The movie-making talent is all there for you to see. Paul Thomas Anderson never does things by halves. He fully commits to every movie, every character, every scene. It does mean we get a lot of footage that is hard to watch.

Movie Critics
…a long, shapeless movie …A motley mix of silly and serious… (Trust me—do not believe anyone who tells you how uproarious the movie is.)… [2½/4]

Liam Lacey, The Globe and Mail
…‘Inherent Vice’ is a two-and-a-half-hour endurance test… meandering even by Anderson’s standards, is easily the worst of his movies… [1½/4]

Kyle Smith, New York Post
…The first Thomas Pynchon novel to hit the big screen gets uneven handling by Paul Thomas Anderson. …most disappointingly, it offers a only a pale and narrow physical re-creation of such a vibrant place and time. …

Ted Baehr, Movieguide
…a drawn-out and stomach-churning two-and-a-half-hour munchfest. It asks us to experience hippiedom with all its garish temptations intact—from the sex to the drugs to the sense of utter bewilderment that might be found amongst the truly and utterly stoned. …

Phil Boatwright, Preview Family Movie and TV Review
…a ball of confusion… virtually impossible to follow on the screen …this stoner romp—in the end, less a whodunit than an existential shaggy dog story. … [2½/4]