The Legend of Hercules

for sequences of intense combat action and violence, and for some sensuality. 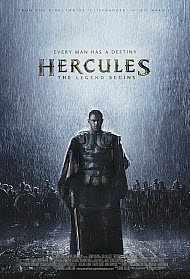 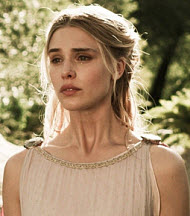 betrayal by a stepfather

trying to restore peace to the land

Every January (or during the first 3 months of the year), I have noticed that the movie year starts with a sword-and-sandal film with an interesting concept, but not always the best attack (like “The Eagle” and “Robin Hood”). “The Legend of Hercules,” fits this category.

Set in ancient Greece, a tyrant named Amphitryon (Scott Adkins) takes over a neighboring kingdom and flaunts his power. Later, his wife Alcmene sees a vision from Hera, the wife of Zeus, that she will bear his son who will save the people of the kingdom. At birth, Alcmene gives the baby the official name of of Alcides, but secretly names him Hercules.

As time goes on, a now adult Alcides/Hercules (Kellan Lutz) proves strong in times of battle, but after continuing a relationship with Hebe (Gaia Weiss), who is betrothed to his sly brother Iphicles (Liam Garrigan), Alcides is sent away by Amphitryon on a campaign to Egypt, not knowing that it is a death sentence. When Alcides finds out Amphitryon’s true nature and his real name and destiny, he and fellow soldier Sotiris (Liam McIntyre) set out to defeat Amphitryon and save the kingdom from his wrath.

This is a typical sword-and-sandal film with a basic storyline, lots of action, and characters that may grow on the viewer. While it is enjoyable to watch (especially near the halfway point of the film, where much of the action takes place), there are many parts that seem too similar to other action films, like “Gladiator.” Also, some subplots seem overly rushed, as if the writers just wanted to get right to it, which takes away from what could be good character development.

But what can be credited in this film is Kellan Lutz’s role (Hercules), as his anguish and drive really feel believable. According to reports (since he is shirtless most of the film), Lutz did much working out throughout production in order to make his abs clearly defined, doing a thousand push-ups and ab-crunches a day while shooting.

There is a lot of violence, starting at the beginning of the film, where Amphitryon defeats and kills the rival king of the kingdom he is aiming to take over. This begins a wave of violence. Throughout the movie there is much killing, punching, stabbing, hostage-taking, sword-fighting, and (about halfway into the film) gladiator matches (which show swords going into backs and sides, and rivals falling into deep pits). Near the end, there are scenes of destruction within the kingdom, and a scene where people are flung around by a fantastical thunderous wave. There is also a scene where a man fights a lion while trying to make his way home. What surprised me about the film, however, is—despite all the violence—most is bloodless, which was a bit of a relief, there are way too many films these days where blood flies everywhere, and even hits the screen once or twice.

The sexual content is pretty heavy, especially in the first 10 to 20 minutes. After Alcmene is promised a boy by Zeus, you see her laying in bed and sexually climaxing after (what looks like) a ghost (Zeus) flies swiftly into her loins; Amphitryon walks in on this, and rages, thinking that Alcmene has a mortal lover. Also, throughout the film, we see Hercules’s love interest Hebe in somewhat loose-fitting clothing, and later on, the two are in bed together kissing and acting sexual, with only sheets shielding them.

Language: There are no profanities or vulgarities, just name-calling, like “You gutless old miser” or “murdering coward.” This is one of the cleanest action films I have seen in regard to coarse language.

Other: You can clearly see at the beginning of the film how bad Amphitryon can be, as he is seen screaming at his wife, being bathed by two slave women in her presence, and committing acts of deception and immorality. A corrupt character tries tries numerous times to get his brother killed. Another moment of upsetting content comes when a woman considers suicide.

There are some positive story elements. Chiron’s actions are one of a number of examples of morality in the film, as he acts in everyone’s best interest. There is a theme of fighting for what is right. As Proverbs says, “When justice is done, it is a joy to the righteous but terror to evildoers” (Proverbs 21:25).

Love is also emphasized, especially through Hebe and Hercules’s love for each other. Followers of Christ know that true “love is patient and kind; love does not envy or boast; it is not arrogant” (1 Corinthians 13:4).

The story includes a number of Bible-like elements. Alcmene is promised to bear a child meant to save the kingdom, similar to Mary’s being promised by the angel Gabriel that she will bear the son of God. “See! You are to become a mother and have a Son. You are to give Him the name Jesus. He will be great. He will be called the Son of the Most High” (Luke 1:31-32).

Near the end of the film, ***SPOILER*** Hercules is captured and chained to two pillars. He prays to Zeus asking for strength; this results in his tearing down the pillars and attacking those responsible for his arrest, and the deaths of many he has grown to love. ***END SPOILER*** This resembles the true story of Samson, where he prayed for forgiveness and strength, and was granted by God a final amount of supernatural power in order to destroy the pagan temple which held him captive.

Despite some Christian themes, I do not recommend this film for followers of Christ, due to its heavy violent and sexual content. However, some diehard action film lovers may enjoy it.

Louis Black, The Austin Chronicle
…The Legend of Hercules turns out to be a coming-of-age tale of sorts, with the Christ-like Hercules (Kellan Lutz) eventually learning to put his faith in his spiritual father, Zeus… Call it Harlin's The Passion of the Christ. … [1½/4]

Kenji Fujishima, Slant
…has some spectacular, exciting moments, including the climactic ending, but it has some clunky, corny moments. Also, the love story between Hercules and the princess could be better written and better acted. …

Ted Baehr, Movieguide
…If only it had been clever. Or well-acted. Or better conceived. As is, it's even worse than you might expect. …

Susan Ellingburg, Crosswalk
Gets the year off to the typical lame start. …

Todd McCarthy, The Hollywood Reporter
…‘The Legend of Hercules’ completely myths the mark. If Kellan Lutz could have saved this fantasy clunker it would have been a Herculean task—but the script is not exactly strong. …