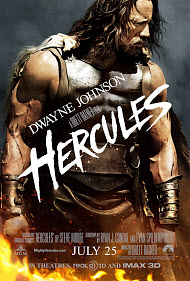 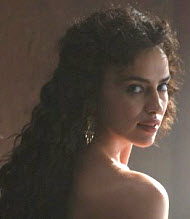 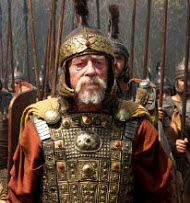 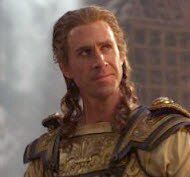 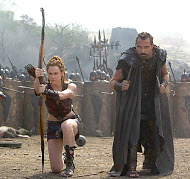 Another 2014 Hercules movie: The Legend of Hercules

Samson—a real man blessed by God with extraordinary strength, but who succumbed to sin

sin and the depravity of man

lions in the Bible

The movie begins with a legend. Hercules was the son of Zeus and a mortal woman. Half man and half god, the man was amazingly gifted in strength and skill in battle. From a young age, Hercules was hated and hunted by the goddess Hera, but, even as a young boy, he foiled attempts at his life with his great skill. As an adult, his power only grew, and his completion of the twelve labors—among them slaying the hydra and killing a lion with his bare hands—brought him fame far and wide.

But that’s just the legend.

The Hercules we meet in the film may have legendary strength, but it turns out that the real Hercules is just a man with a troubled past and a mercenary who fights for gold. Is he the son of Zeus? Is he half god? Not even he really knows. But the combination of his incredible strength and the stories of his past have earned him a name—a name that is feared among his enemies. That name has also made him and his team of mercenaries desirable to anyone who is looking to hire out a quick fighting job. These jobs have been stacking up for Hercules and his five fellow fighters, and each of them only need one more big bag of gold before they can retire in style. They just need to wait for the next job offer to come around.

It arrives soon enough, coming from the mouth of a princess, the daughter of the King of Thrace. She and her father need help defeating a merciless warlord, and Hercules and his five companions are the people they need to give themselves the upper hand. All Hercules and his team have to do is whip the Thracian army into shape and defeat the warlord. After that, they can take their gold and live happily ever after. Simple, right? At first, it’s nothing that Hercules and his friends can’t handle. When things start to smell fishy, though, Hercules and his companions realize that the situation may not have been as simple as they expected—that, just maybe, they’ve ended up on the wrong side of the fight.

Based on a Radical Comics graphic novel, this film is all about the action. Consequently, the plot and character development are on the low side while violence, death, and gore are very high. The heroes of the movie have the skill and physique of the Avengers and fight with the intensity of characters from “The Lord of the Rings.” Needless to say, there is a lot of fighting and a large number of battle scenes.

Throughout the film, Hercules repeatedly takes out multiple men with a single blow of his club, other characters are stabbed or killed by arrows, rotting heads are impaled on poles, warriors are run over by chariots or burnt to death in fires, and dead, bloody bodies—even the bodies of children—lay in piles on the battlefields. One character swipes his finger across a rotting body and licks the gore off of his finger. There are also a number of frightening mythological creatures, such as a three-headed wolf, a multi-headed snakelike water creature, and an enormous lion—all equipped with razor-sharp teeth and freaky eyes.

The enemies that Hercules and his followers battle in one scene are tattooed all over and have a creepy green tint to their skin. The combination of that and their orc-like battle cries makes them especially frightening. In all, the level of blood and gore in this film is reminiscent of the 2011 movie “The Eagle,” but it lasts a lot longer. The violence alone makes this film inappropriate for young viewers.

To top it off, the movie also contains a few objectionable scenes and suggestive comments. The most offensive scene appears in one of Hercules’ tormented dreams—a very brief shot of his wife’s bare backside, from the knees up. It is absolutely unnecessary to the plot and to the movie in general. Even if that weren’t true, however, guys who choose to watch this movie would still do well to cover their eyes during this brief scene. There is also a scene at the beginning of the film in which Hercules’ mother is wearing a very revealing, low-cut dress that is nearly transparent in the front, resulting in a lot of cleavage. During a celebratory feast, a few scantily dressed belly-dancers sway to music. Low-cut, breezy dresses appear to be the norm for most female characters throughout the film.

The one female warrior in the movie, however, is dressed for battle. But her choice of armor isn’t exactly what I would pick to wear in a fight. Her outfit consists of something like a mini-skirt and a short top that leaves her belly and lower back uncovered. Several characters also make some jokes referring to “breasts” and other private parts of the body. We also see the naked Hercules as a newborn baby, and the adult Hercules is shirtless for most of the film.

Although the worldview presented in this movie is certainly anti-biblical, I would not consider the worldview issues to be a reason for skipping this movie. “Hercules” introduces a strange mix of the ancient Greek view of the world and modern existentialism. One character is a seer and continually talks about visions of the future that the gods reveal to him. He also makes a reference to the Oracle at Delphi. In another part of the movie, a warrior assures his fellow fighters that they have no need to worry about dying in battle because they will join the souls of heroes in Elysium. Later, a character adds, “Or, if you’re lucky, you’ll go to Hades where all the fun people are.”

While we see and hear characters praying to and speaking about the gods, characters also assert that humans “have it within themselves to write their own legends.” In the closing lines of the movie, one character says, “You don’t need to be a demi-god to be a hero. You just need to believe you’re a hero.” The movie asserts mankind’s autonomy—his power to make himself into something great. This message in the film is the perfect opportunity for discussion about man’s true capabilities. According to the biblical worldview, the life of a human is fleeting, and his powers are oh-so limited. Isaiah 40:6-8 says,

Those who hope in the Lord, however, are the people who will find true strength. God is “the everlasting God, the Creator of the ends of the Earth… He gives strength to the weary and increases the power of the weak” (Isaiah 40:28-29). Compared to God, all men are like grass. They will all wither and pass away. Yes—even Hercules.

Despite the objectionable content, I would probably still consider this movie worthy to rent. It’s nothing sensational and nothing incredible in the realm of acting or filmmaking, but it still has some exciting fight scenes, interesting plot twists, and discussion-worthy elements. However, this movie is not for everyone—especially for those who like to avoid blood and gore. Males should also be cautioned against choosing this movie due to the brief scenes of nudity. If you enjoy battles, however, and are willing to close your eyes during a scene or two, view this movie with a mind ready to face the issues it presents and ready to consider whether a human can truly be a hero on his own.

Positive
Positive—This is THE BEST movie that I have ever seen. I’m a big fan of sword-and-sandal-type movies. I’ve seen most of the movies in this genre like “Conan the Barbarian,” “Conan the Destroyer,” “300,” “Centurion,” “The Eagle,” “Gladiator,” etc. Russel Crowe’s “Gladiator” has always been my favorite movie of all time, but not anymore. Dwayne Johnson’s “Hercules” has now taken the number 1 spot in my list of favorite movies of all time.

Dwayne Johnson worked very hard on his physique for this film, and you can see that his hard work paid off. He looked incredible! His physique even surpassed that of Arnold Schwarzenegger in his prime. I thoroughly enjoyed myself watching this film.

The only critique I have is that one swear word “f***ing Centaurs” in the middle of the film. That was unnecessary.

But for the rest, the movie is very entertaining and enjoyable. I had very high expectations before watching the film and I was NOT disappointed. I rarely buy movies, but this movie is so good that I plan to buy the DVD as well, as soon as it becomes available in the store.
My Ratings: Moral rating: Better than Average / Moviemaking quality: 5

Renier, age 34 (South Africa)
Negative
Negative—This is one of the most violent movies I’ve ever watched. I had to close my eye on a lot of the scenes, but could still hear the violence. The mythology was somewhat offensive, also, but that was to be expected, I guess, with Hercules being the theme. There was nothing in this movie that was uplifting for Christians. I would not recommend this to anyone, especially children. This should have been rated R.
My Ratings: Moral rating: Very Offensive / Moviemaking quality: 3