for language, sexual material and some drug use. 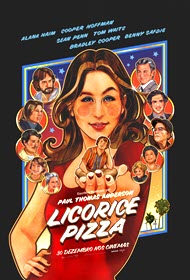 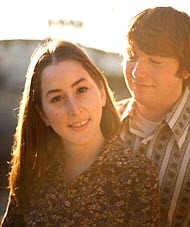 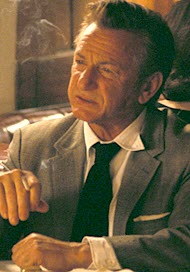 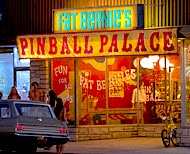 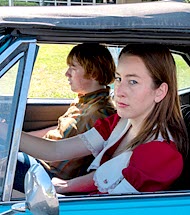 Coming out as an atheist

Being a child actor 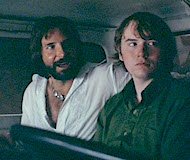 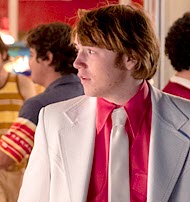 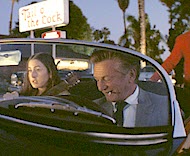 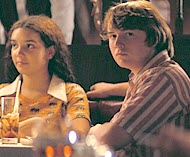 Paul Thomas Anderson’s “Licorice Pizza” takes its title from the name of a California record store chain which, popular in the 1970s, is now defunct and mostly forgotten. A clever concept at the time when home shelves were filled with collections of vinyl LPs and record stores were filled with customers anxious to build those collections, the Licorice Pizza stores closed after they were abandoned by a new generation who turned their allegiance toward the ease and flexibility of digital music.

Not many saw that change coming.

In Colin Hank’s documentary, “All Things Must Pass,” Russ Solomon, the former owner of Tower Records, some might say the Emperor of the record store world, saw little future in digital music: “people will always want their record collections.”

Even titans can get it wrong.

Anderson’s film is about the coming of age of a would-be titan. His fictional hero, Gary Valentine (played with low key charm and on-key panache by Cooper Hoffman) is a child actor who is also a budding entrepreneur. His many ventures, mostly seventies era fads such as waterbeds and pinball arcades, seemed fashionable and enduring in their time, but today are as passé as the record shops of old.

As in many Anderson films, a whole lot of stuff goes on, and only bits of it gel. Some is relevant to the plot, some is tangential, and more than some makes no sense at all.

In an early scene, the main character is arrested, handcuffed and thrown into jail. No clear reason is given for that harried sequence. In another later scene a political campaign is being spied on by a shadowy minor character, but who he actually is and what he’s up to remains a mystery. Anderson has come up with an affecting, if somewhat disjointed, coming of age story, but he muddles it by throwing too much into the mix.

In Anderson’s 1997 “Boogie Nights,” and 1999’s “Magnolia,” I thought I would get a glimpse into the inner workings of a society I did not know, whether it was the dirty dealings of the adult film industry or the private lives of end-of-millennium Californians. Instead of a capsule view or a piecemeal insight, what I got was the whole Megillah. When depicting a culture on screen, Anderson wants to show every aspect, and by elevating so much trivia, he smothers the story’s essence. A new-age Cecil B. DeMille, he puts it all on the screen whether germane or not. His cutting room floor must be the cleanest in all of Hollywood.

Nonetheless, “Licorice Pizza” has more focus and is a lot more fun than his earlier films. Although he still strays from the straight and narrow like a driver who cannot ignore off ramps or roadway attraction signs, his latest has a grounded center and a wistfully nostalgic tone.

Gary is a 15 year old high school student who supports himself as a child actor, and a public relations assistant in his mother’s advertising business. In his free time he starts his own businesses, hiring his high school friends, his 9 year old brother, and other grade-schoolers as waterbed and pinball machine installers. The youngsters not only do a lot of the heavy lifting; they attend the businesses’ opening night parties as well. All that gave me pause, but I said “well, okay” when I realized that the strongest thing they were drinking at those parties was Coke.

While having his high school yearbook photo taken, Gary meets and immediately falls for Alana (Alana Haim of the pop group Haim; her sisters/band mates play her sisters in the film) who, as a 25 year old woman and the object of a teenage boy’s affections, is conflicted. She sees that the boy certainly has something, but feels it would be worse than wrong to date a boy his age. Not only would it be morally unacceptable; it would be decidedly uncool.

Gary’s courting of Alana is often rehearsed “Frank Sinatra-Dean Martin” suave and once in awhile it lands. Other times it is teen-level clumsy. For the most part, he keeps the hormonal high jinx in check, and the few physical connections between Gary and Alana stay within bounds. Nonetheless, what is on display here is a budding romantic relationship between an adult and a child. And such a bud should not bloom.

There is no overt lovemaking, but several scenes come too close, and imply, even propose, something that is not only illicit, but illegal. Despite the film acknowledging as much, things move forward in accordance with the familiar elements of most rom-coms, but due to the nature of the relationship, things evolve in reckless, and at times, dangerous, ways.

Alana so admires Gary’s business acumen that she becomes his partner in several ventures. Their joint endeavors, as well as the quixotic and frenzied adventures that ensue, are the most enjoyable parts of the movie. Despite the two lead actors’ inexperience (both are making their film debuts), and the filmmakers’ decision not to cover up facial blemishes or dental defects with makeup or camera tricks, Hoffman and Haim come off not just competently, but winningly.

The plot hums along with intermittent sparks, but despite hitting some high notes, it never achieves a steady rhythm. Gary has a brief acting gig in New York and when his mother cannot accompany him to the East Coast, he takes Alana along as his chaperon. From there we move to the water bed and pinball ventures, then to some Japanese restaurant encounters whose stabs at language barrier comedy never land, then to a series of political campaign shenanigans, all of which play out in predictable and pedestrian fashion.

The 1970s gasoline shortage crisis is thrown into the mix providing some good plot twists, but Anderson gets his historical time line wrong, an anachronism that would be fine if he did it to enrich his story, but doing it to push a political narrative and make a cheap shot at a former President looks maudlin and lazy.

Anderson’s subplots give a lot of name actors a chance to do cameos which, taken together, seem to be one long contest of who can emote the most. Tom Waits, Sean Penn and Christine Ebersole, the latter two doing raucous impersonations of William Holden and Lucille Ball, chew the scenery with abandon, trampling any co-star who crosses their paths.

Only Bradley Cooper as hairdresser/film producer/Barbra Streisand boyfriend Jon Peters hits the mark with his portrayal of a quintessential 1970s dude who tirelessly strives to be a player. Cooper catches Peters’ Svengali touch as well as his street urchin instincts. He is equal parts appeal and menace.

Unlike a 1950s awakening story in which innocence is key, one that takes place in the 1970s, after Vietnam, the sexual revolution and the Roe vs. Wade Supreme Court decision, cannot help but let cynicism come to the fore.

The children in “Licorice Pizza” are more than youngsters. They see and do far too much on their own without instruction and guidance from adults. They never encounter a rod or a staff. Shepherd-less, they are forced to navigate an uncertain world in uncertain ways.

Anderson’s film may open a window into such a world, but it makes few judgments about what goes on inside. Minors, no matter how mature they seem, can be harmed by adults who, rudderless themselves, are incapable of ensuring safety, or salvation, for their younger charges.

A movie that is made with commendable skill and glimmers with soothing nostalgia should build, or at least pay more attention to, a moral rudder. Instead, Anderson’s film drifts in amoral waters. It does not drown; in fact, it treads rather well. But treading water works only so long. And so far. Ask the owners of the Licorice Pizza record stores.

Negative
Negative—I watched this film today on a library DVD. The movie received rave reviews on a secular site, but I think your reviewer comes closer to my own opinion. The movie succeeds well in depicting the confusion of teenage years, but it seems to be viewing that era from today’s perspective, namely, the amount of hard core profanity was simply not as rampant in the 1970s as it is today. The theme of teenage confusion spills into the rest of the film, rendering a meandering plot that loses focus and simply meanders aimlessly and boringly. The worldview is joyless. There is nothing to recommend.
My Ratings: Moral rating: Offensive / Moviemaking quality: 3
Halyna Barannik, age 76 (USA)