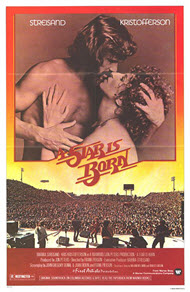 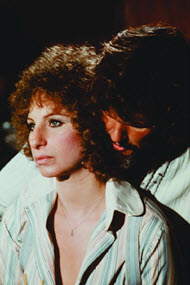 “A Star Is Born” is the 1970’s remake of the classic film starring James Mason and Judy Garland about a rising, female star who is assisted by an aging, male star whose career is in a tailspin.

Barbara Streisand portrays Esther, an unknown nightclub singer, and Kris Kristofferson plays the role of the aging rock star on a tailspin downward due to a combination of drinking, drugs, sexual escapades and a tremendous sense of hopelessness and apathy about his career and life in general. Kristofferson helps Esther get “discovered” by literally dragging her out on stage one night during the middle of a song at one of his concerts. Esther sings and is a gigantic hit. Almost overnight she moves from obscurity to stardom.

Kristofferson seems to live vicariously through Esther’s career, but warns her about the empty, lonely life that rock stars often face. He is drawn to her and eventually they begin a romantic relationship, eventually marrying. Esther desperately tries to maintain her integrity and her marriage relationship among the immoral and uncaring world of popular entertainment. Yet, ironically, Esther’s success drives her husband deeper into depression at the failure he believes his own life and career have been. The film ends tragically but with a somewhat feel-good feeling.

“A Star Is Born” is an artistically well-made film. Streisand and Kristofferson both give excellent performance and have excellent on-screen chemistry together. However, parents take note, this film is rated R for a good reason. It contains instances of numerous profanity, fornication, adultery, drug use and other adult content. The worldview in this film is unclear, but no solution is ever really presented to the hopelessness that Kristofferson’s character feels and his suicide is seemingly never condemned. Yet, I found this film to be a touching portrayal of devotion between two people who seem to genuinely care for each other amidst the often uncaring and unfeeling world of the modern music industry.

Negative
There is a romance somewhere in the story, but it is overshadowed by the drama of the music business that surrounds the main characters. Film felt like it dragged on and on to me. The version with Judy Garland and James Mason is the better one (and free of the questionable scenes in this 1970’s version).
My Ratings: [2/2]