—in Persian with English subtitles 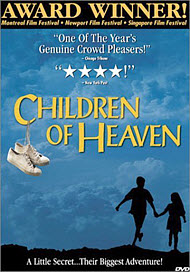 “Children of Heaven,” a.k.a. “Bacheha-Ye aseman” (1997 release) is a wonderful film from Iran. It is directed by Majid Majidi, and he is certainly to be lauded for crafting a wonderful and very special movie. This is not a Christian film per se, but its values are. The characters are unforgettable, and this movie stands out as an appropriate, unoffensive and highly entertaining family film.

The plot is simple. Nine-year-old Ali is running errands for his mother… picking up bread from the baker, and waiting while his sister’s shoes are repaired by a shoemaker in a streetside stall. While picking up potatoes, the shoes are taken by a blind trash hauler accidentally, and that event sets off a chain of events which will affect all the characters in this film. Ali convinces his sister to keep quiet, and the two decide to share one pair of shoes with heartwarming and hilarious results.

“Children of Heaven” reveals a side of Tehran probably quite unexpected by a generation of Americans more accustomed to the stereotype of the wild-looking fanatic.

A truly wonderful film. The moment I heard about this Middle Eastern gem, I knew I had to watch it. It never appeared in a nearby theater, so I had to wait for the video. That’s what I did and it was well worth the wait. There is nothing offensive about this film (only one case of profanity). The most amazing part of the film is that it gives Americans the chance to see something that has been hidden since 1979—Iran.

A few years back this film would never have made it past Iranian censors. But, today (thankfully) it does. I hope there will be more Iranian gems to come in the years ahead. My Ratings: [5/5]