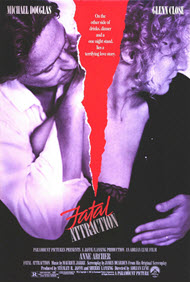 Dealing with the consequences of affairs, this film itself “attracted” plenty of attention when first released. It’s well constructed and well acted, but extremely vulgar in content.

Although he seems happily married, Dan (Michael Douglas) falls into a weekend fling with coworker Alexandra (Glenn Close). Afterwards, she refuses to be cast aside and commits progressively more serious acts of harassment and violence against Dan and his family. The film is available on video with the theatrical release ending, with the director’s “original” ending, or with both (in either ending, the problem is finally resolved but Dan’s family will never be the same).

Definitely adults-only. And even an adult who has a problem with sexual temptation should avoid watching it, since it contains scenes of pornography (realistic simulated sex with nudity and fondling—stuff that would have been rated X in the early ’70s). On the other hand, since the consequences of irresponsible behavior are also shown, it might scare some people straight. Also filled with profane language (even Dan’s six-year-old daughter has a foul mouth), emotional suspense, terror and violence.

Incredibly, one movie industry insider characterized this film as being way too conservative because of its “sexist” content. Men and women are shown as inherently different: Dan uses “love” (pretended sensitivity) to get sex while Alex uses sex to get “love” (companionship); and Alex, though a successful businesswoman, is depicted as empty inside because she missed out on having a family. This insider revealed that Hollywood doesn’t really believe in those “values”, but sometimes writes them into films because such films play well in “The Flyover” (their derogatory term for the 46 states between New York and California) and therefore help pay the bills.

The best that can be said for this film is that it shows that actions have consequences. We might call it a morality play from a mostly immoral industry.

I will say this: this film made a lot of men rethink committing adultery, if only for a little while, when it was first released. In the original ending, the husband suffered what could be viewed as a fitting payback for hurting his family. However, the film studio pushed for an ending which seems a bit out of place in relationship to everything else that happened in the plot. My Ratings: [2/4]