Today’s Prayer Focus
10 Things I Hate About You
MPA Rating:

for crude sex-related humor and dialogue, alcohol and drug-related scenes, all involving teens. 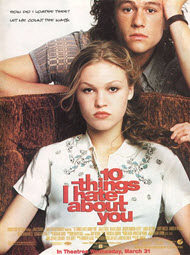 “How do I loathe thee? Let me count the ways.”

The Stratford girl’s are as different as night and day. Bianca (Larisa Oleynik), sweet, simple, popular and desperate to date; Kat (Julia Stiles), antisocial, antiestablishment, antiauthoritarian, and determined to avoid the opposite sex. Dr. Stratford (Larry Miller) is positively opposed to either girls' participation in the prom and comes up with a solution for Bianca’s problem and his… Bianca can date when Kat does! Enter Patrick Verona (Heath Ledger), Cameron James (Joseph Gordon-Levitt) and crew with a devious plan to capture the heart of a shrew.

A clever update of Shakespeare’s “The Taming of the Shrew,” “10 Things I Hate About You” combines subtle allusions to the Bard in a modern medium. I love the occassional dialogue throw backs to the original “Shrew” (“I burn, I pine, I perish”). I was pleased with the sharp performances of the young actors and actresses, who handled the complexity of characters in Shakespeare’s plot with amazing ease. A well done film.

“Ten Things I Hate About You” is rated PG-13 for crude sex related humor and dialogue and alcohol and drug related scenes. Rightly so. There is quite a bit of inuendo throughout the movie, most of which a Christian audience will find unnecessary. Although no racier than Shakespeare’s original (albeit a bit more blatant), “Ten Things” does have enough sexual content to justify a warning. Parents with teenagers could use Kat’s comments about her sexual experiences being a negative result of peer pressure as a launching point to discuss a difficult topic.

Furthermore, Dr. Stratford’s ignorance is bliss; yet, still ignorance and, as Christian parents, we cannot ignore the fact that teenage pregnancy is virtually the same in the Church as in the world. This movie also touches the hard topic of teenage alcohol and drug abuse. Although treated lightly in the film, Christian parents can use this to talk with the young people God has put in your life about the perils of drugs and alcohol.

All said, well done. If you take a teen to this movie, the negatives should be thoroughly discussed from a biblical viewpoint and not ignored or avoided. These are real issues in the real world! And maybe you can hook your kids (or yourself) on the works of the Bard! Shakespeare can be fun!

Positive
Positive—The reviewer nailed this movie. It was good, but, alas, had its rough spots. I’m 20, and I liked the movie a lot, so clearly it’s not just aimed for only kids. But mostly though.

Luke, age 20
Neutral
Neutral—Many people have submitted complaints that it is a shame Shakespeare’s “Taming of the Shrew” had to be sullied up with sexual bawdiness. I must believe that these people have never read Shakespeare with comprehension. “The Bard” is the king of Bawd. If you can understand them, his writings are the most vulgar in the English language. No fault of his own, they were vulgar times after all. So, if you want to “expose” your children to Shakespeare I think this movie would fit the bill.

Collin G., age 24
Negative
Negative—I always enjoy movies that modernize classics. Well, almost always. “10 Things I Hate About You” did manage to surprise me a few times near the end, and of course, everyone “learns their lesson” and becomes a better person. But only the most obvious problems in the film are resolved; it still has a LOT of moral gaps.

Shortly after this, another scene shows one student drawing a penis/testicles near another student’s mouth, about as graphically as dry erase marker can do it. And in a later scene, a student flashes her breasts at a teacher to distract him and suggests that they use this same technique to distract their opposing sports team. She walks right out of the room without getting in trouble, too. Setting this plot in a high school setting makes for a very questionable movie.

The teenage romantic relationships are unrestrained, including LOTS of kissing. Yes, this is something that appears in a lot of high school dramas, but this movie is ALL ABOUT it. And in all honesty, I don’t know what else people expect from a Shakespeare-based story. While Shakespeare’s stories were never in high school setting, they still displayed the same Godlessness in romance.

The only thing that kind of impressed me about this film was that there wasn’t very much language. I’ve let movies with equally offensive content get by with a moral rating of just “Offensive,” instead of “Very Offensive,” because of their positive messages. But I can’t do that for this one. The positive messages here are much too underwhelming. I do not recommend this film to anyone.
My Ratings: Moral rating: Very Offensive / Moviemaking quality: 3

Gabriel Mohler, age 27 (USA)
Negative—Hollywood has once again taken what could have been a great movie and turned it into something totally unacceptable. While it did have some good scenes, I found most of it, particularly the adults portrayed in the film, to be extremely offensive if not downright stupid. These scenes could have been either been left out entirely or toned down with no loss to the plot. Too bad.

Faye Johnson, age 41
Negative—I, as a young Christian male, found this movie to be both disturbing and loopid. How could someone honestly go into this movie and find it funny. It seemed to promote a fast lifestyle of sex, drugs and gambling. I find this to be hardly acceptable in accordance of my Christian views.

At one point in the movie a young man drew a picture of the male private area on anothers head. I don’t see how this is funny. What kind of fashion trends are this movie trying to set. How are we as Christians supposed to carry ourselves with dignity if he have picture of private areas on our foreheads. Is this the mark of the beast? You decide for yourself.

Allan Howard, age 43
Negative—Ten things I hate about this movie were the first 10 minutes of it. I would implore this site to reconsider the rating of this movie. In the first ten minutes you are treated to the following:

1) A shot up a girl’s (Bianca) dress as she gets into a car. 2) A penis drawn on the face of a boy by another student and after a few minutes of close-ups he finally says “I have a d*ck on my face don’t I” 3) A guidance counselor who is writing a trashy love novel while all but ignoring here students' problems. She does however call Kat a “heinous b*ch.” And the words of wisdom for a boy who exposes himself are keep it in your pants. 4) A teacher who warns one of his students that if he doesn’t watch himself he may get “b*ch slapped.” 5) A student’s statement that a sheep would make a better date than Kat and that seemed to be his preference anyway.

I took this reviewer’s recommendation and took two of my daughters to this movie or should I say the first 10 minutes or so. I have very little free time with them and thought introducing them to Shakespeare’s work set in there own time would be a delightful treat. What I treated them to was a movie that scraped the bottom of the entertainment gutter. The language was atrocious and the constant fixation with sex was pathetic. This movie had little redeeming entertainment value. This is a movie that should be avoided at all cost. If you think I am being a little hard on this movie the Movie Guide rated it as BAD and had this to say, “TEN THINGS I HATE ABOUT YOU can only have a detrimental influence on teenagers.”

Michael Hilding, age 35
Comments from young people
Positive—I thought this movie was excellent and hilariously funny. The reviewer was exactly right—Shakespeare himself wrote tons of crude humor into his plays. This movie did a fantastic job of putting the essence of Shakespeare into a modern setting. Most high schoolers talk about sex, drugs, and alchohol everyday, so in order to portray a realistic high school, the “crude” and “disgusting” comments were not unnecessary.

Anya Gruna, age 17
Negative—After viewing this movie, I must disagree with the reviewer that it is an acceptable movie for teens. While the screenplay is witty and closely related to Shakespeare’s original, it is far more offensive in dialogue. It is a good story, but the blatantly offensive comments make it an unacceptable film for serious Christian audiences.

Mark Siverling, age 17
Negative—I saw the movie, and was really upset with it. I was hoping to be able to go out and maybe see a good film, but this was discouraging to me. The use of sex jokes, references to sex, drugs, alcohol, and swearing isn’t needed. Again, I was very upset with this film and I hope and Pray that Hollywood finds some better scripts soon.

Amanda Olson, age 15
Negative—I honestly thought that maybe I would be able to see a good movie. That was blown out of the water about 5 minutes into this movie. The Counseler writing an X-rated book? Why was that needed? The many refrences to Sex, Drugs, drinking… I don’t see how that was needed. If Hollywood thinks that “teens” act like that, then maybe they should be going back to school to find out what really happens. I could see where this movie can set examples, and that scared me. Yeah, there were some cute jokes here and there, but not enough to make me think this movie is alright. I would not take anyone to see this movie. The script is too messed up to really show it to anyone. Don’t waste your money!

Amanda Olson, age 15
Negative—It’s really a shame that such a creative modernization of Shakespeare’s “Taming of the Shrew” had to be destroyed by so many disgusting jokes. There were not enough redeeming scenes to make up for what the crude “sex humor” detracted from the movie. I found other aspects of the movie offensive as well. The acting was good and the raw plot is great, I wish I could really recommend this movie with a clear conscience. However, I think it is important that the critic warn that this show will give more than what someone may want from a romantic comedy.