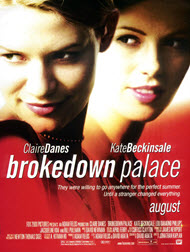 “They were willing to go anywhere for the perfect summer. Until a stranger changed everything.”

This film was advance billed by the media as a realistic portrayal of the fate of many Western women (some guilty, some innocent) imprisoned for drug trafficing in the Far East. I believe it is well-done in that sense, showing the realities of the Thai legal system and prison life without unnecessary graphicness.

Claire Danes and Kate Beckinsale portray 18-year-old American tourists who are jailed for smuggling heroin. We are left uncertain whether Danes' or Beckinsale’s character is the one who actually packed the drugs, or whether the hustler who talked them into a side trip from Bangkok to Hong Kong just slipped it into their bags.

Parents, take note: there is plenty of bad attitude in this film. The girls change their vacation destination from Hawaii to Thailand without telling their parents, scam a fancy hotel, compete over a suave Australian they meet (with implied sex), and then blame each other when they’re arrested. Then there’s the drug runner who sets them up, and the high government official who protects him.

The portrayal of Third World prison life with brutality, bribery and favoritism, the suffering which accompanies the loss of one’s freedom—these are topics which make the film somewhat worthwhile despite the raw language and crude situations. The prison scenes are not overdone; it’s left to the viewer’s imagination to fill in some of the details.

One element which “connects” people to a film is self-sacrifice, and eventually there’s a good deal of that here—by the girls' lawyer (Bill Pullman) and by others (to say more would unnecessarily reveal the plot). Whether the film is “Titanic,” “Deep Impact”, or a super-low-budget independent release, the idea of someone sacrificing himself for another always has a certain fascination. That being true, it’s unfortunate that the highest expression of self-sacrifice ever known—that of Jesus—is not better understood.

I highly recommend this film. On a positive side, the film did a great job portraying the meaning of true friendship and selflessness, as well as the downfalls of being deceiving. There was mild profanity and some scenes of drinking and drug use. However, I thought Claire Danes and Kate Beckinsale did a beautiful job of portraying what happens to many people from the West when they are accused of a felony in a foreign country.