for graphic shark attacks and for language. 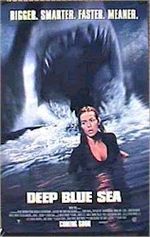 The impact this movie will have on the audience will depend on the viewer’s personal perspective. If they go to see an intellectually, stimulating movie that is not only entertaining but is accurate in every detail, they will be disappointed! If they go to see a horror flick, they should enjoy it. However, most of the time you will be able to figure out what is going to happen even before it happens. If you go to be entertained and do not care about accuracy or how much it frightens you, you will love this movie.

When I go to a movie, I want to be entertained. I want to feel like I haven’t wasted my time or my money. I want to go out feeling good about myself or somehow believe life, itself, is good. And sometimes, I simply want to feel the raw passion of the human emotion. What I mean is, I want to feel scared, tense, uneasy, mad and upset. I want to feel anguish and pain for the main characters in the movie. I want to become involved with the stars and feel what they are feeling. And I want to laugh.

Critics will find the typical flaws, such as: sharks cannot swim backwards (even super-intelligent ones—after all, they may be smarter, but their bodies are still the same). Sharks, like humans, need to go to school to learn and just because they are smarter does not mean they can learn without being taught. And on and on it goes. But, who cares? Let the critics tear it apart, I enjoyed it. And, so did a lot of people that I have talked to.

“Deep Blue Sea” is about a group of researchers who have devised a way to use the brain tissues of sharks to cultivate a substance that, when applied to damaged human brain cells, will rejuvenate within minutes. This process is believed to cure the effects of Alzheimer’s disease. The crew of the floating laboratory, Aquatica, is now faced with almost certain death. To produce the serum needed, the crew violated ethical codes by genetically re-engineering the DNA of three mako sharks. This increased the shark’s brains five-fold, which resulted in these super-intelligent sharks being able to figure out the layout of Aquatica. Now in hot-pursuit of the crew, the mako sharks are attacking with a vengeance. No one is safe!

“Deep Blue Sea” is heavy on profanity; but the nudity is kept to a minimum. You will see two young couples making out/caressing each other onboard a boat. There is a scene when a woman removes her clothing (down to her bra and panties) revealing her wet breast and related cleavage. She does this to save her life. This movie is too intense for children and younger teens! IF the secular world deems it unsuitable for children under 17, then why shouldn’t we (the church, who are supposed to be better than they)?

It sure is a different experience to view a film like this—not in America—but in the Philippines. Everyone in the packed theater reacts so fully to a film. Time and time again I heard the screams and saw the jumps from other moviegoers. It did leave us all in suspense, wondering who would stay alive and if they could even make it out of their unusual predicament. Pretty clean, for an “R” rated flick. Here in the Philippines, it was a “PG-13”.

T.C., age 26
If you leave out LL Cool J’s bashing of Psalms 23 and the cursing, this is a pretty good movie. I was in suspense the whole time.

David Horton
The movie was a shocker. Glenn Stewart did a terrible job directing the movie. I have never seen any movies worse than this in my life. Hopefully, next time Glenn will use his talents to finer projects starring Ram or Shaun.

Stev Mariskoy, age 21
Overall, this was an exciting movie with several unexpected turns. The only major disappointment I encountered as a Christian was a scene in which the remaining three characters began to pray. The character leading the prayer began to quote the 23rd Psalm. I was overjoyed thinking what a wonderful segment for a secular movie.

Unfortunately, toward the end of what started as the 23rd Psalm, ended with a secular, humanistic twist (instead of “…I will fear no evil for thou art with me…” became “…because I carry a big stick and I beat down etc, etc.”) This is blasphemy to me because the holy scriptures were perverted. This was only a small part of the movie, but be prepared if you go with someone who does not know what the 23rd Psalms really says and means.

Pequot Mom, age 40+
“Deep Blue Sea” lives up to its name as the “Jaws” for the new millenium. The characters are cool, there are funny humor bits, and the sharks, the real stars of the film, are awesome. I’d give it five stars.

On the moral issues: There are three F-words, and a few of the lesser profanities. In the sex/nudity category, there is a scene in which some teen couples make out (and are attacked by a shark; perhaps a morality play) and when Saffron Burrows takes off her wetsuit to use as insulation against electricity and we see her in her underwear. In violence, there is quite a bit, but it is pretty much like “Jaws”, only with a bit more gore.

There’s other stuff though. One of the characters is a Christian who prays a lot (that’s good) and leads the others in prayer in one scene before they escape from sharks. Two, the Saffron Burrows character, though she violates professional standards, is motivated primarily to cure Alzheimers, not to make money (that’s also good). The characters often risk their lives to save others (“No greater love hath any man who lays down his life for his brother,” eh?). Three, the Samuel L. Jackson character tries to get the others to work together and be peaceful (that’s good). All in all, “Deep Blue Sea,” despite its large amount of violence, is perhaps one of the few pro-Christian horror films. It is appropriate for everyone over 11. See it today!

Matt Quinn, age 15
This movie is an “ok” movie for older teens. It does have profanity. Without the 4 “f” words its not that much from what you would hear on a “TV-14” show. The blood is high and revealing. When the woman takes her wetsuit off she does not reveal anything. It is the same as seeing an ad for women’s underwear on TV. There is a speech given by LL Cool J on scripture, but he ruins it with profanity. And the “cross” does save his life. All in all this movie is a pretty good movie.